Is “Star Wars: The Force Awakens” doing another Death Star with Starkiller Base?

Star Wars: The Force Awakens (2015) is presenting an array of similarities to the original Star Wars (1977) that launched the franchise. Both films feature a young tan-colored fabric wearing protagonist on an adventure, aided by an unconventional companion. Both films provide the hero support in the form of a hooded mystic, both heroes do battle with a dark, masked combatant, and both films have a Death Star with devastating capabilities.

The new Death Star, revealed as Starkiller Base (named after George Lucas’ original last name for Luke Skywalker), is proving itself to be one of the elements fans are most curious about. What exactly is this new evil? What makes it different from the previous two Death Stars? And why exactly didn’t they come up with something new?

The base was first revealed in the film’s original promotional artwork (seen in the header), looming in the corner as a big, purple, Death Star-resemblant presence. When director J.J. Abrams was asked if Starkiller Base was actually a “new Death Star,” he confirmed the assumption. “It is very much — and it’s acknowledged as such in the movie — apparently another Death Star,” Abrams noted. “But what it’s capable of, how it works, and what the threat is, is far greater than what the Death Star could have done. Starkiller Base is another step forward, technologically speaking, in terms of power.” 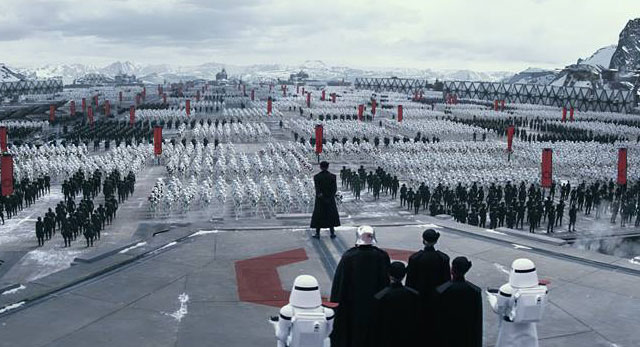 From a military standpoint, a bigger, more powerful Death Star makes some sense. The first units were defeated and this is the latest successor to the Empire’s Death Stars in an ever-evolving line of weaponry. Starkiller Base is the primary home and muscle of the film’s First Order, commanded by General Hux (Domhnall Gleeson) and Vader-obsessed enforcer Kylo Ren (Adam Driver).

Entertainment Weekly writes, “Abrams says it’s only logical that this new generation of Imperial wannabes would consider the failure of their idols to be a lack of ambition. If they’re going to succeed where Darth Vader and the Emperor failed, they’re going to have to demonstrate that they are even more menacing and destructive.”

The Star Wars databank has officially added Starkiller to its knowledge base. Their description describes it as a rather imposing object: “An ice planet converted into a stronghold of the First Order and armed with a fiercely destructive new weapon capable of destroying entire star systems.”

The databank description confirms Starkiller Base isn’t just another constructed weapon - it’s an entire planet that has been warped into something with unprecedented powers of destruction. (That also means there’s no thermal venting port for Luke Skywalker to shoot and cause it to explode.)

The description raises more questions: Does Starkiller have a propulsion system? The Death Star was the size of a moon but was able to move. It, however, was a man-made object and not a planet. With Starkiller’s alleged ability to destroy entire star systems, does mobility even matter? And is the weapon the planet itself, or just stored within the stronghold of the First Order?

Further, if the ice planet is inhabited by people other than the evil First Order, its existence becomes a lot more involved. For Skywalker and company, blowing up the Death Star was an obvious course of action as the only people there were enemies. The resistance is likely to be much more hesitant in destroying Starkiller if natives other than the First Order live there, particularly if they are being held in captivity. It could present a deep moral issue for the story.

In any case, one hopes Starkiller Base has more going on under the hood than a simple “Death Star Part III,” lest The Force Awakens truly emerge as A New Hope with a fresh coat of paint. Marketing for the film is carefully controlled, and hype is founded on speculations and assumptions.