How does the “Game of Thrones” play-within-a-play service Arya Stark’s story?

Quick Answer: Arya Stark watches a series of plays as she plans to carry out an assassination attempt for the Faceless Men. Onstage, she witnesses the disgrace of her family and the demise of her enemies, recreated in a satirical version of reality and played for laughs. But Arya is emotionally stirred by the actors, who, as characters playing roles, mirror her own attempt to become no one and join the Faceless. When she can’t go through with the assassination, she’s reminded of the person she truly is. Meanwhile, the plays offer clever commentary on the larger Game of Thrones narrative we’re watching.

Remember William Shakespeare? He’s that guy whose works fill up AP English syllabi across the world, who churned out a bunch of plays and sonnets half a millennia ago. One of them was “Hamlet,” a tragedy with ghosts and regicide and deception and all sorts of Game of Thrones-y goodness, with a critical moment taking place during a play-within-the-play. Now, Season Six of Game of Thrones (2011-) has been employing its own play-within-a-play across a few episodes, complete with its own Rosencrantzes and Guildensterns acting out major moments from the first five seasons of the show with hilarious satirical inaccuracy. These plays are a fun gag for the audiences as they allow us to re-live moments from previous seasons through the lens of distorted comedy, and also work as an insightful mirror to the recent journey of Arya Stark (Maisie Williams), with whom we watch the dramatizations that often involve members of her own family cast as buffoonish, ignorant losers.

The plays are being acted out in concurrence with Arya studying under the Faceless Men of Braavos to become a nameless assassin. The Faceless are, quite frankly, unsure whether Arya has the dedication to renounce her existence as a Stark and become “nobody,” and task her with the murder of the play’s lead—a woman taking on the role of Cersei Lannister. Placing Arya in this scenario forces her to face her past and present in one fell swoop. There is something touching to challenging Arya’s convictions in the way the series is doing here—the individual who hired the Faceless to perform the assassination is the player cast as Sansa, Arya’s real-life sister, and the target is Cersei, one of Arya’s sworn enemies. As Arya watches these actors take on the roles of others, she is attempting to take on the role of the Faceless, who can assume anyone’s identity, to become a killer. The result is a complicated trial of emotions and, as it turns out, Arya decides she does have a name after all. 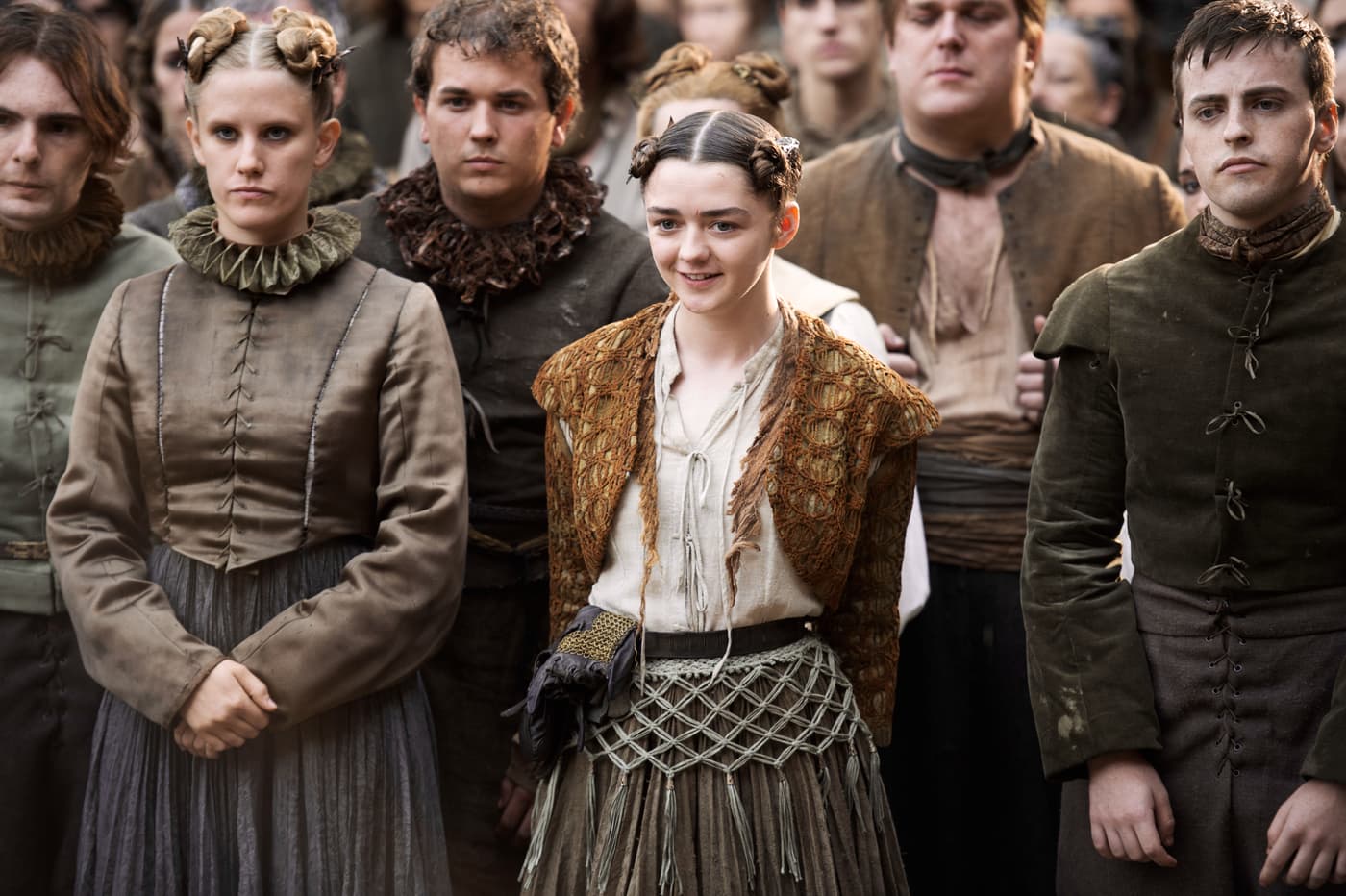 Arya watches the play with the crowd

The first time Arya watches the play is a reflection of the last time she was gathered in a crowd for a public event. That time, it was her father’s beheading at King’s Landing. This time, it’s a satirical recreation of that same moment. The two beheadings end up becoming bookends to the journey Arya has taken over the past several seasons since fleeing the capital following the execution. As challenging and disturbing as it is for her to watch people cheer for her father’s death and mock his legacy (which, it turns out, isn’t a great one), she finds equal pleasure in witnessing the performances involving her nemeses, especially the death of Joffrey. She wasn’t able to see such things in person, so scenes that emulate negative moments in the lives of those she despises fill her with an elated schadenfreude, and she can’t help but snicker through the representations of her enemies’ pain.

Despite the pleasure the darker parts of these plays bring her, she’s touched by the performances. In Season Six, episode Six, “Blood of My Blood,” Arya’s response to Cersei’s grief on stage is curious. When she speaks to Lady Crane (Essie Davis), the actress playing the part, she gives Crane the tips of someone who secretly lived on the inside of highborn society. “The queen loves her son more than anything,” Arya says. “And he was taken from her before she could say good-bye. She wouldn’t just cry. She would be angry. She would want to kill the person who did this to her.” It’s at that moment that Arya faces her own need for revenge and sees her own self clearly. Perhaps, her motivations and Cersei’s — angry vengeance stirred by the loss of those we love — aren’t vastly different at the core. Arya is someone we have watched travel for several seasons hell-bent on righting the wrongs done to her family by executing the people on her mental hit-list. Yet, in this moment, we wonder if something hasn’t fundamentally shifted in the angry young girl.

The plays are the distorted Twitter feed version of history, as interpreted by those on the bottom rung of social hierarchy, but the rare, truthful performance of grief, given by the woman Arya has come to kill, sparks a moment of recognition in Arya. The mirror of theater reminds Arya who she really is and why she needs to remain that person. Being a Stark gives her the opportunity for real influence in the events of her world. Moreover, something deep within her spirit cannot continue to hide from her true nature. Instead of carrying out the will of the Faceless Men, she protects Lady Crane from drinking the poison she had administered to her drink and highlights the assassin in her midst, only to return to the rocks where she buried her precious sword, Needle, before she entered the House of Black and White. The simple fact that she hid the sword was evidence of her uncertainty all along. Now there is no going back to the Faceless Men. She’s a target herself. At least, this is how everything seems.

The other purpose of the play is, while reminding us of how beaten down Starks have been throughout the series, to showcase how the common public views the elite houses and their tragedies. The play gives a voice to those regular people in the street, whom Game of Thrones so often references but almost never hears from. We witness the public’s contempt for the rich, selfish, power-hungry leaders that treat their own people as invisible pawns. It’s clear from the performances and the crowd reactions that there is little love for Ned Stark and the Lannisters are equally worth insulting, but Tyrion in particular is painted as a nasty, drunken, villainous little creature. We saw this type of performance before, commissioned by Joffrey (Jack Gleeson) at the Purple Wedding, but that was crude entertainment for the elite. This time, it’s for the common folk. We infer that Tyrion’s small stature makes him, almost de facto, an assumed villain to the public. 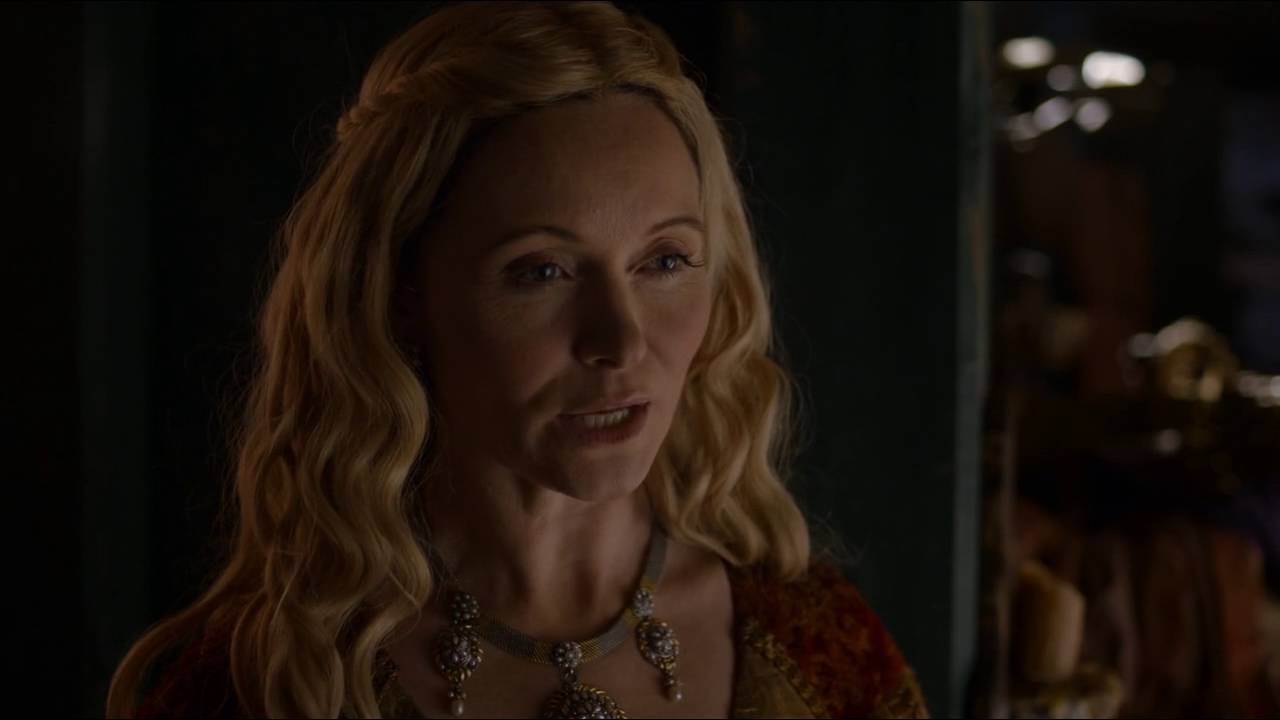 The details of Joffrey’s execution and Tyrion’s involvement in the murder, like most of what’s depicted onstage, comes from gossip and not facts, but the facts aren’t anyone’s concern. It’s clear that the public thinks every potential leader in the Game of Thrones is equally worthless. To them, the battle for the Iron Throne is irrelevant. Each contestant is as horrible as the other. None, certainly, cares about the well-being of the public (even if Natalie Dormer’s Margaery Tyrell occasionally puts on shows of charity.) This brief window into the public sentiment may offer us a clue for the power Daenerys might gain if she does gain the hearts of the people of King’s Landing, as she has done in so many places. In Season 5, Episode 8, “Hardhome,” Tyrion scoffs at Daenerys’ hope that she can take Westeros with only the support of the common people, but the story’s new attention to the extreme hatred that the lower classes of Westeros feel for their aristocracy could become more central to the plot.

If Arya leaves town, it’s hard to say whether or not we’ll get the privilege of seeing the play-within-a-play again. Either way, the theatrical mirror is a clever touch from the showrunners that also brings to life the minstrels and performers who would have told stories of recent events in Medieval societies, reminding us of Game of Thrones’ loosely historical, quasi-Medieval setting. The scenes break the fourth wall in a subtle way, affording us a glimpse of the series’ self-awareness. They also demand a reaction, like the one Hamlet was hoping to get out of his step-father Claudius, and here they successfully provoke one from Arya. She’s forced to think about what assassinating this lovely, talented actress truly means. She sees no wrong in the woman, only the jealousy of a lesser actress trying to take her place. That just isn’t enough.

Read More on Game of Thrones:

Why is the Hodor reveal so huge for the story?

Daenerys Targaryen: Why do so many fans like her?

What real-life castles and locations are used on Game of Thrones?

Which book characters absent from the show does George R.R. Martin miss most?

What is the true history behind Cersei’s Walk of Shame?

Now that the show has passed the books, how much will Winds of Winter mirror Season 6?