How does “Orange Is the New Black” compare to past “Women in Prison” movies?

Quick Answer: Orange Is the New Black follows a long tradition of “Women in Prison” movies that dates back to the 1950s. But whereas most earlier movies tended to present female inmates with a message of moral judgment or as sexualized objects, OITNB tries to portray these women’s stories with depth and realism (even if it sometimes veers toward sensationalism). Its longer format as a TV show rather than a film, its diverse cast and its exploration of serious issues allow the show to surpass earlier entries in the genre.

[Spoiler alert: this article discusses vital plot points up through the end of Orange Is the New Black Season 3.]

Although Orange Is the New Black (2013 - ) is far from the first depiction of women in prison, it is one of the first to do so with realism and deep emotional sympathy for its characters. As much as its later seasons reach for over-the-top laughs and plot twists, Netflix’s breakout hit about the inmates at a minimum-security women’s prison in upstate New York is far more diverse and true-to-life than those that have come before. The“Women in Prison” is a long-standing genre, with the first entries dating back to the 1950s. But historically, many Women in Prison movies have been exploitation films that rarely, if ever, looked at the circumstances of imprisoned women with nuance.

Caged (1950), a classic staple of the genre, follows a young ingénue who is imprisoned after a failed robbery that she committed with her husband, who died during the act. In Caged, the prison is Hell. Marie Allen (Eleanor Parker), our ingénue, enters the prison as a wide-eyed widow and mother-to-be, hopeful that she will be released when she is up for parole. She leaves the prison having lost her hope and her innocence (seen symbolically by the corrupt matron forcibly shaving off her hair). The movie’s ending makes it clear that Marie will be back in prison again before long. The film’s bleak progression makes it a simple morality tale against the horrors of prison, but because the characters are never fully developed and the situations are not played to echo reality, Caged never leads the audience to actually care about the issues. 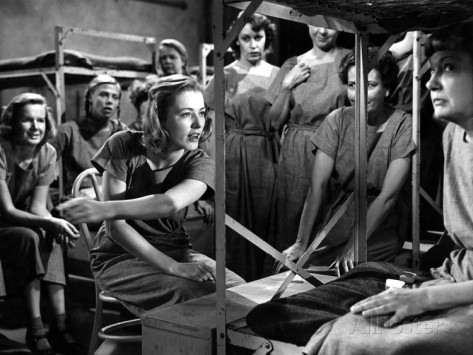 Actress Eleanor Parker and the female inmates of Caged (1950)

In many ways, Caged’s set-up is similar to Piper’s introduction to Litchfield in Season 1. The audience sees the prison environment through her naïve eyes and is shocked by the deplorable conditions and general depravity that they find there. We feel, at first, that neither ingénue belongs in this place. A key difference is that, over time in Orange Is the New Black, Piper becomes acclimated to these conditions. Her time in prison leads her to do things that are more than a little morally questionable, such as beating Pennsatucky (Taryn Manning) and starting a panty-smuggling ring. But we are not encouraged to simply view her transformation in a judgmental, negative light. The signs of goodness in flawed characters and the non-condemning tone of Orange Is the New Black makes Litchfield into a sort of moral limbo. The bureaucracy is corrupt, and some of the inmates are, too, but no character is shown in black-and-white good or bad terms. All of the characters find moments of happiness, no matter how brief, within the prison walls. 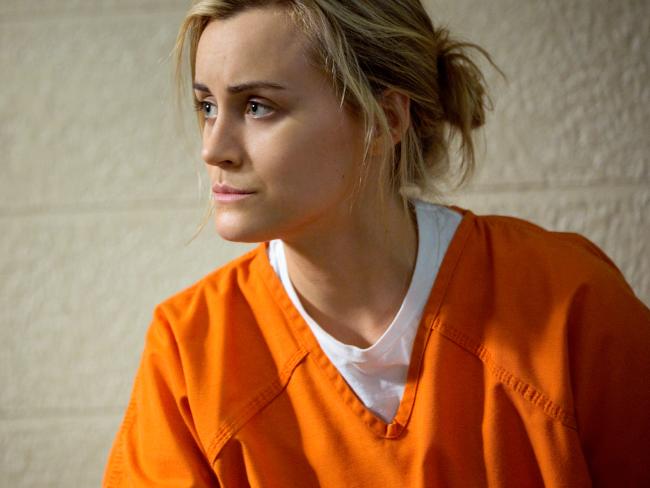 Other films in the Women in Prison genre focus on the “sexy” side of women’s prisons – namely, the possibility for lesbian sex and the scenario of “naughty” women being punished. A quick look at the posters for Women in Prison movies Chained Heat (1983), The Big Doll House (1971) and Bad Girls Dormitory (1986) shows just how much these films sexualize the non-glamorous reality of women in prison. 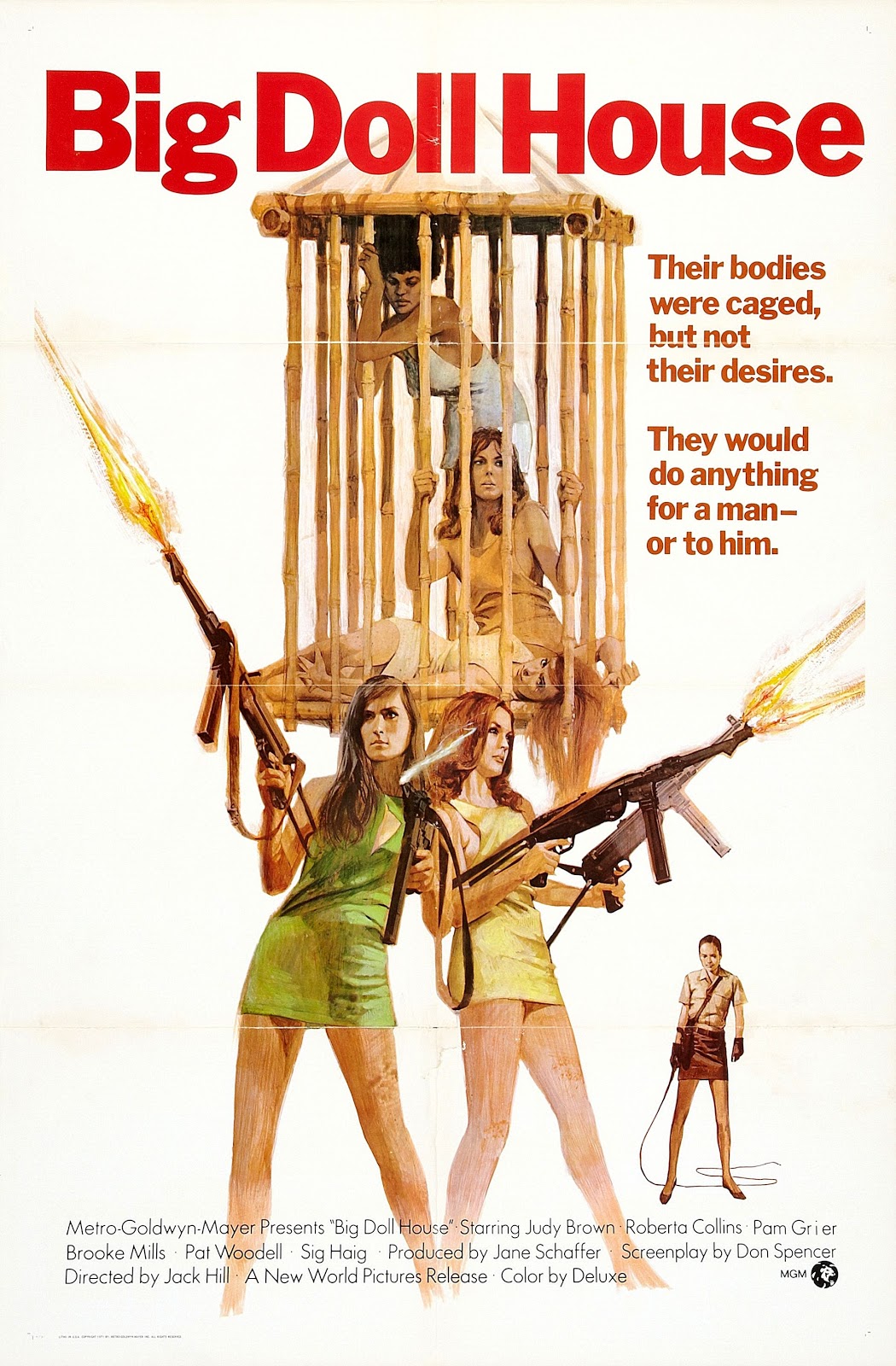 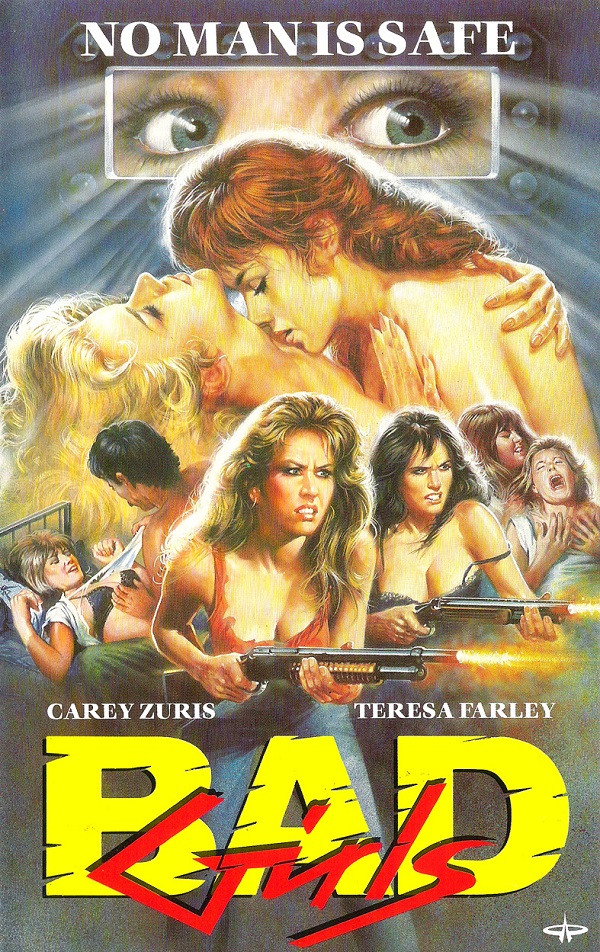 OITNB is far more complex than any of these examples, although the show is not above sometimes sexualizing its actresses. The show’s frequent and graphic lesbian sex scenes are discussed just as often as its diversity, and OITNB Season 3 even includes a brief plot arc in which a bedbug infestation led the inmates to all walk around in their bras and underwear. In fact, the actresses on the poster of the pornographic comedy Bad Girls Behind Bars (2016) share more than a passing resemblance to OITNB on-again-off-again couple Piper Chapman and Alex Vause (Laura Prepon). Still, all of the characters on the show have real obstacles. Even Season 3’s token hot lesbian Stella (Ruby Rose), arguably the character treated most like a sex object, displays at least some depth. 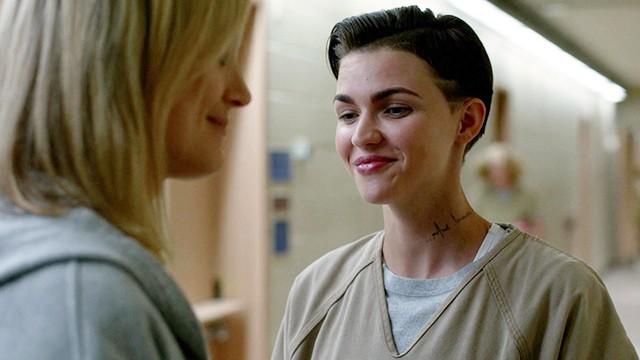 OITNB has also been lauded for its exceptionally diverse cast, something that has rarely been matched onscreen in Women in Prison movies or at all. Although the series originally focused on the white, upper-middle class character Piper Chapman (Taylor Schilling), it quickly expanded to become a true ensemble piece featuring characters of various races, socioeconomic classes, religions, and sexual and gender identities. Orange Is the New Black has taken home the Screen Actors Guild Award for Outstanding Performance by an Ensemble in a Comedy Piece two years in a row and garnered praise for moving beyond the typically limited representations of women in the media. As actress Samira Wiley, who plays black, lesbian character Poussey, told the LA Times, “What you see on television, especially women, is this silhouette of an ideal that a lot of women cannot reach. [Series creator] Jenji [Kohan] has put women on your TV screen that look like a rainbow. It’s a mirrored reflection of life.” 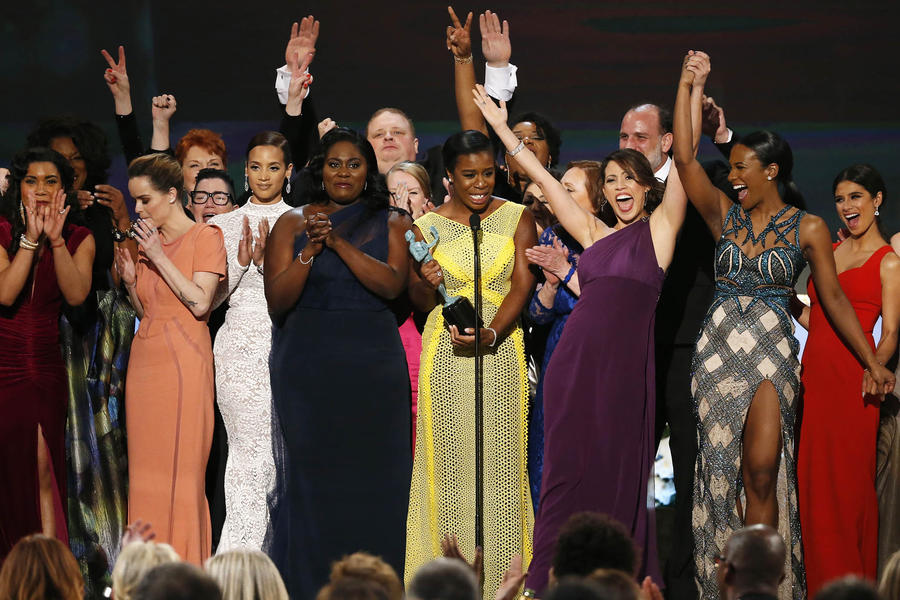 A reflection of life, maybe, but does that mean the show also serves as an accurate reflection of women who are actually in prison? To some extent, yes. The show’s representation of racial demographics seems to align with those in real prisons. In 2006, of all women under custody by the New York State Department of Correctional Services (who represented only 5% of the 63,304 total prisoners), 46% were African American, 22% Hispanic, 30% White, and 1% Other. OITNB features black, Hispanic and white female prisoners more or less equally, and in a way that gives members of each group depth of character.

Narratively, OITNB tries to mimic imprisoned women’s reality not just through casting but also through the show’s storylines. Because it is an ensemble piece with an episode structure that highlights a different inmate’s origin story in each episode, the series has the opportunity to tell a plethora of stories about how a person could wind up in prison and what she might do once she is there. Notably, these stories do not shy away from the harsher realities of these women’s lives. The aforementioned survey found that 79% of the female inmates studied were abusing drugs and/or alcohol. OITNB has shown a wide variety of experiences with drugs, from Tricia (Madeline Brewer), whose addiction lead her to overdose, to Angie (Julie Lake) and Leanne (Emma Myles), who chug nutmeg during a prison blackout in an outlandish attempt to get high. The show also has tackled problems with mental health, education and parenthood, all of which are closely related to actual statistics of women’s prison populations. OITNB also delves into questions of sexual orientation (is Piper initially a closeted lesbian or bisexual?) and gender identity (its treatment of the transgender character Sophia), issues whose centrality is much harder to quantify in real inmate life, but which are seldom represented in other mainstream shows. 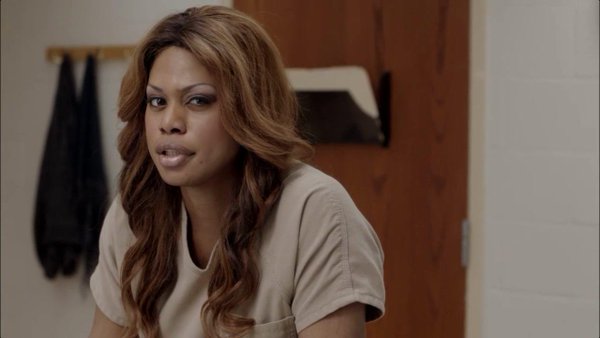 One key reason that OITNB has been able to create a nuanced environment is the time that a long-running series has to develop characters and ideas, compared to the short running length of a movie like Caged. But time can be a double-edged sword, as multiple seasons also encourage writers to search for increasingly shocking, entertaining or surprising twists in order to keep audiences engaged in the story. As the show has progressed, some of its depth and realism has been sacrificed for sensationalism. Whereas in early seasons character backstories involve broken families and drugs and other factors that would likely contribute to landing women in NY state correctional facilities, Season 3 features a mute woman who pushed her fanatical cult leader-husband off a cliff (before inadvertently creating her own cult in prison) and an Amish drug addict who goes undercover to catch more formerly-Amish drug users. Season 3 also includes an inmate authoring an intergalactic erotic novel, the prison’s take-over by a vague but evil corporation that makes the inmates manufacture women’s underwear and a group of prisoners who pretend to be Jewish so that they can eat Kosher meals. This is a noticeable break from Season 1, which featured a guard who used inmates to smuggle drugs, a woman who gets pregnant while in prison and one inmate’s attempt to murder another on religious grounds. Season 1 also had its share of comedic plotlines, but those tended to be grounded in substance, such as Red’s crusade against Piper after the ingénue insults the kitchen food, or used as a much-needed comedic break from the real conflicts, as in Episode 5, “The Chickening.” In Season 3, comedic breaks start to become the bulk of the show.

There is no imperative that realism must be the ultimate goal of Orange Is the New Black or any piece of entertainment. Still, the series started out with a strong focus on doing justice to the narratives of imprisoned women, a group that gets so little justice at all. It told stories in ways that were entertaining and often funny but that always made the audience care. Season 4 will reveal whether the show is finding its way back to this core or whether it will push ahead embracing its sensationalist streak.

Either way, OITNB’s depiction of women in prison is a huge step forward from the likes of Caged and Bad Girls Behind Bars.