How does “The Dressmaker” show the transformative powers of fashion?

Quick Answer: Twenty-five years after she was branded a murderer and forced to leave town, Myrtle Dunnage returns to her small Australian hometown of Dungatar as Tilly, an accomplished dressmaker. With newfound confidence and allure, Tilly transforms the women of her hometown with her couture fashions. While the women cloak their physical imperfections behind extravagant dresses, the beautiful clothes only serve to highlight the vanity and cruelty lurking beneath, ultimately leading to their demise.

The Dressmaker (2016) centers around Myrtle Dunnage’s (Kate Winslet) not-so-prodigal return to her rural Australian hometown of Dungatar. In 1926, Myrtle was the sole witness of the death of her schoolmate Stewart Pettyman. Branded a murderer, Myrtle is exiled from the town and sent to boarding school. She then runs away and travels across Europe, where she becomes an accomplished dressmaker. Twenty-five years later, Myrtle, now going by Tilly, returns to her hometown to take care of her ill mother Molly (Judy Davis) and exact revenge on those who wronged her. Dressed in titillating couture creations, Tilly brings color back into the desaturated and dusty town, providing the plainly dressed women of Dungatar with exciting new fashion. While the women cloak their physical imperfections behind extravagant dresses, the beautiful clothes only serve to highlight the vanity and cruelty lurking beneath.

Although we do not see Myrtle’s evolution into Tilly, flashbacks to her childhood show that she was a fearful and unostentatious schoolgirl. The young Myrtle stands in stark contrast to Tilly, the full-fledged femme fatale who returns to Dungatar. Tilly certainly makes a dramatic entrance, flaunting her Dior and Madeleine Vionnet-inspired gowns during a football game; she distracts the players and causes townspeople to grumble, “The nerve of that girl.” 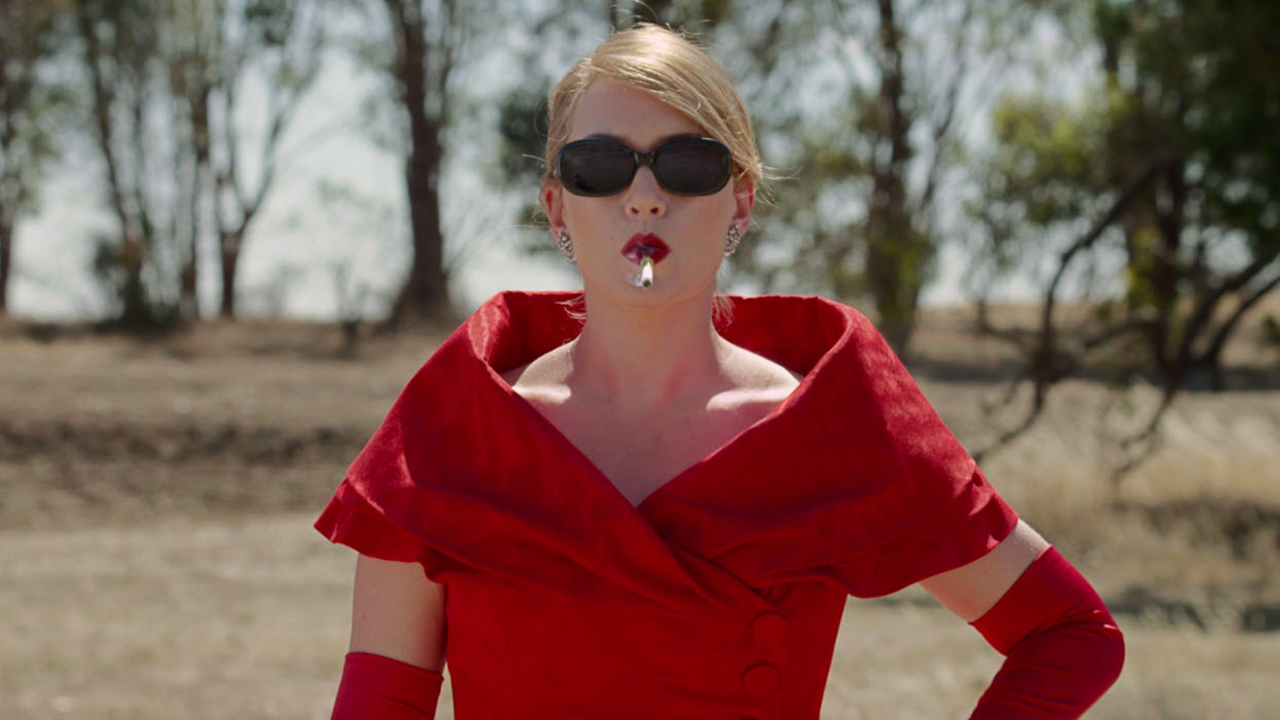 The townswomen are captivated by Tilly’s fashions, but they remain wary of her allegedly murderous disposition and outsider status. During the game, Tilly gives a business card to Gertrude (Sarah Snook), the homely daughter of the owners of the town’s general store, and offers to make her a dress for the Footballers’ Dance. Shocked by her offer, Gertrude responds, “A dress can’t change anything!” Although she’s suspicious of Tilly, Gertrude reluctantly accepts in order to impress the wealthy William (James Mackay) at the dance.

Gertrude (Sarah Snook) before Tilly’s offer to transform her

Utterly transformed by her dress, Gertrude enters the Footballers’ Dance and approaches William with a new sheen of glamour and confidence. The two become engaged soon afterwards. The townswomen grow jealous of Gertrude’s sudden transformation and begrudgingly begin to ask Tilly for dozens of extravagant dresses. As Tilly takes advantage of their competitive habits, the women of Dungatar quickly go from drab to couture.

Tilly’s dresses do much more than inspire confidence in the townswomen; they upset the town’s very social structure. Prior to Tilly’s arrival, the people of Dungatar remained within their social status and conformed to the town’s expectations for each of them. However, Tilly understands the power and statement a dress can make. As such, her designs disturb Dungatar’s social balance by levelling the playing field. Whether you’re the homely daughter of a shopkeeper or an anxious and confined housewife, Tilly can dress anyone to look like a model off a runway in Paris. Soon, the women of Dungatar become fully reliant on Tilly as they are desperate to upstage each other. As Tilly gains control and seeks to undermine the town of Dungatar, she preys on the fragile vanity of the townswomen in order to get what she wants: revenge.

While the dresses empower the women and give them confidence, that confidence also comes with a newfound arrogance. Much like Tilly changed her name from Myrtle, Gertrude similarly transforms into Trudy, the president of the town’s newly made social club. While Gertrude was timid and nice, Trudy is controlling and obnoxious. She becomes increasingly self-important and demanding as her new dresses and her wealthy beau give off the illusion of her being upper-class. 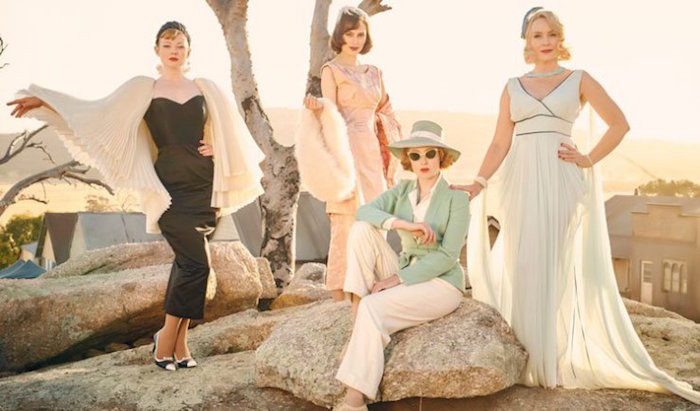 The women of Dungatar dressed in Tilly’s couture fashion

Although the women’s couture disguises may give them an air of sophistication, their attempts to reach the upper echelons of high society are, like their outfits, superficial. They are still the same judgmental rural women underneath the elegant garments. Rather than suppressing the women’s cruel tendencies, their new clothes amplify their worst qualities. Pre-transformation, the women secretly gossiped about Tilly’s past. Once they begin to don extravagant new outfits, the women warrant their terrible and overt behavior by hiding behind their new dresses and perceived social status.

Their façade of sophistication begins to break down when the social club attempts to do a staging of Shakespeare’s Macbeth with baroque costumes. Their hubris is their downfall as they overestimate their knowledge of the arts and in their moment of weakness, Tilly strikes and gets her final revenge.

Perhaps the only person who embraces Dungatar’s new fashion and escapes Tilly’s revenge is Sergeant Farrat (Hugo Weaving), the town’s police officer. He does not partake in the townspeople’s merciless gossip and is truly sympathetic to Tilly’s situation. Tilly’s arrival allows Farrat to openly express his passion for fashion and interest in crossdressing. While the townswomen hide their true selves by dressing in a way that reflects how they wish to be perceived (elite, upper-class women), the opposite is true of Farrat. He used to hide his true self behind his police uniform, but Tilly’s arrival allows him to cross-dress and reveal who he truly is. For Farrat, Tilly’s arrival catalyzes his own self-acceptance. He, more so than the self-interested townswomen, is able to break the societal expectations of Dungatar. He even confides in Tilly and rectifies the past mistakes he made. To Sergeant Farrat, fashion isn’t a disguise to hide behind; it’s a way for him to express himself. In doing so, he ultimately frees himself from the wrath of Tilly. 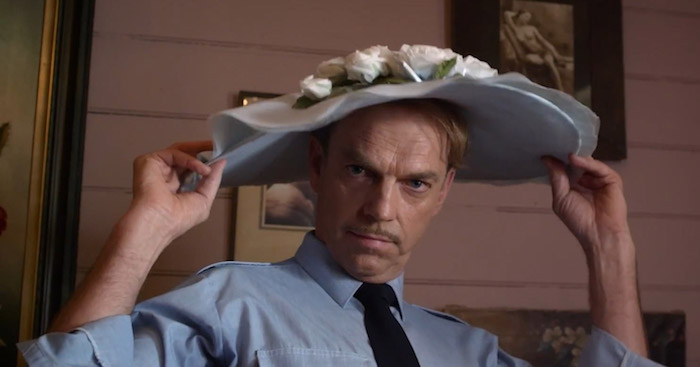 For the people of Dugatar, fashion is, for better or for worse, undoubtedly transformative. In the case of Farrat, fashion is a beneficial tool for self-acceptance; Tilly’s elaborate clothing allows him to stop hiding behind his police uniform and be himself. Conversely, for Dungatar’s townswomen, fashion becomes a dangerous façade. Though the women’s flashy attire inspires empowerment and confidence, it also draws out their latent vanity, nastiness and upper class aspirations. While Tilly’s designs are alluring and attractive, they can’t hide the inner ugliness of the women of Dungatar.