For “Captain America: Civil War,” why should I be Team Cap?

Quick Answer: Marvel’s upcoming film Captain America: Civil War shows the superhero team The Avengers divided into two groups led by two men: those on the side of Tony Stark, a.k.a. Iron Man, and those on the side of Steve Rogers, a.k.a. Captain America. I’m Team Cap because, since Captain America’s first film, Captain America: The First Avenger, Steve Rogers has proven himself to be a true hero. Considering the classic definition of a hero, a character who combats adversity despite the peril, many superheroes are more “super” than “hero” because they don’t actually face their own potential destruction. By contrast, Captain Rogers is a great leader. He’s brave and self-sacrificing, risking his own life for the greater good. Thus, Captain Rogers is an actual superhero and the best Avenger.

A hero is generally defined as a character “who, in the face of danger, combats adversity through impressive feats of ingenuity, bravery or strength, often sacrificing his or her own personal concerns for some greater good.” Heroic acts require courage and self-sacrifice.

Superheroes, as classically designed, were meant to possess these characteristics of a hero with the added benefit of superhuman abilities, be they natural-born (e.g. Superman), mutagenic (e.g. Wolverine) or man-made (e.g. Batman) in nature. But superheroes in modern movies frequently seem to be more focused on the “super” than the “hero.” They lack a truly heroic quality because they are never in any real danger. If bravery is acting despite fear of danger, and extreme abilities make some superheroes like Superman, Wolverine, and the Hulk virtually – or actually – indestructible, how can they claim to be brave or self-sacrificing?

Captain America, thus, is arguably one of the only true superheroes. He possesses the best characteristics of both a man and a super-being. By no means indestructible, he risks himself in true danger even before he takes on superhero form. He is brave, self-sacrificing, honorable and uses his super-abilities to help mankind, proving himself to be a great human being and superhero by both classic and modern standards.

In Captain America: The First Avenger (2011) Steve Rogers (played by Chris Evans), slight of build but not of heart, wants nothing more than to fight for his country during the Second World War, but he is unable to pass the Army’s physical exam. Undeterred, he tries at four separate enlisting locations but is each time rejected due to his long medical history, which includes everything from asthma to scarlet fever. Still, Rogers refuses to give up, telling his friend James Buchanan “Bucky” Barnes (Sebastian Stan), “There are men laying down their lives. I’ve got no right to do any less than them. That’s what you don’t understand – this isn’t about me.” 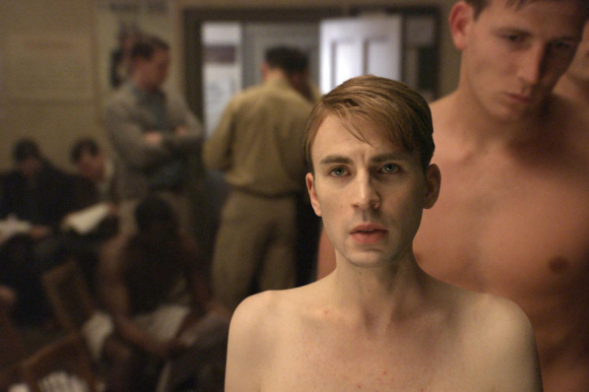 Steve Rogers waits in line at an enlistment station.

His luck turns the fifth time he attempts to enlist: Rogers is discovered by Dr. Abraham Erskine (Stanley Tucci), who sees the value in the man who won’t give up trying. He enrolls Rogers in his “Super Soldier Program” – an attempt to use science to create a biologically enhanced soldier. All of the super soldier candidates are entered into basic training, where Rogers proves himself to be smarter as well as braver than the other cadets. In an effort to prove Rogers is an unsuitable soldier, Colonel Chester Phillips (Tommy Lee Jones) throws a grenade among the cadets; while the others run away, Rogers dives on top of it to save everyone. Luckily for him (and for us) it was just a test – Phillips had thrown a dummy, rather than a live grenade.

Despite Phillips’ objections, Erskine selects Rogers to become the Super Solider. He explains to Rogers, “The serum amplifies everything that is inside, so good becomes great, bad becomes worse. This is why you were chosen. Because a strong man who has had power all his life may lose respect for that power. But a weak man knows the value of strength, and knows compassion.”

“Stay who you are. Not a perfect soldier, but a good man.” – Dr. Abraham Erskine to Steve Rogers before the Super Soldier treatment.

As anticipated, the serum makes Rogers bigger and stronger, but he is not indestructible. Captain America is not bulletproof and doesn’t have metal bones. He doesn’t have X-ray vision or laser eyebeams; he cannot fly or even outrun a plane.

Also, despite his powers, he is still the same man with the same principles of self-sacrifice. He stops chasing down Erskine’s killer to rescue a boy who the murderer has thrown in the water. After disobeying orders by crossing enemy lines to rescue nearly 400 POWs (a mission which he single handedly completes), he immediately surrenders himself to Colonel Phillips for disciplinary action. He leads his team of seven men (known in the comics as the Howling Commandos) back across enemy lines to take down Hydra’s bases across the globe. And, in the end, he pilots an enemy plane into the Arctic – and to his certain death – to prevent it from launching its weapons at New York City. 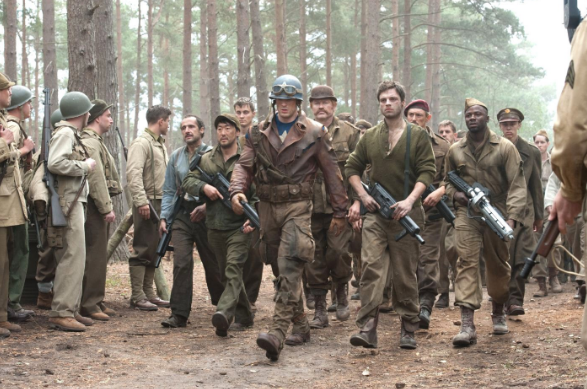 Captain America leads the POWs back to camp

Captain America proves time and time again that he’s the same good man as he was at the beginning of the film; the man who, when asked, “They sure are killing a lot of our boys over there – kind of makes you think twice about enlisting, huh?” responded with a simple “Nope.”

Yet in The Avengers (2012) when Captain America asks Tony Stark (played by Robert Downey, Jr.) what he’d be without his Iron Man armor, Tony replies “Genius, billionaire, playboy, philanthropist.” But not hero. Tony seems to fight only because he feels guilty about his inventions falling into the wrong hands in Iron Man (2008) and Iron Man 2 (2010), and because his A.I. Ultron decides to kill all the humans on earth in Avengers: Age of Ultron (2015), rather than out of an intrinsic heroic need to defend what is right.

That is not to say that Iron Man isn’t heroic (or fantastically fun). He does use his superior intellect and super-strength to help others, and he does sacrifice himself. But, based on his reply to Captain America, Iron Man is the hero and Tony Stark is not. Stark only becomes self-sacrificing when it suits him or when he feels he must reverse great wrongs for which he bears responsibility.

Today, human heroes like Hawkeye (Jeremy Renner) and The Black Widow (Scarlett Johansson) who are brave in the face of real danger tend to be marginalized. In fact, neither Hawkeye nor The Black Widow have their own movie. Captain America, who was created during the Second World War, seems to be the exception, and the historical context of his character offers some explanation. As a culture, during WWII we needed everyday men to become heroes, and those everyday men faced less inner conflict because the enemy we fought appeared clear. Today, there are more grey areas, and the “enemy” is no longer as easy to identify as the Nazis were; now we need our heroes to be greater than mere mortals. But Captain America’s (and Steve Rogers’) clarity of purpose is refreshing in our current superhero landscape, which often values power, cunning and style over purity of motivation.

Captain America has all the qualities of a hero – he faces danger head-on; uses his intelligence, courage and strength to fight for what is right; and ultimately sacrifices himself for the greater good. Most importantly, he shows these qualities even before he becomes “super.” Steve Rogers has always been a hero. He didn’t back his way into heroism out of feelings of obligation or responsibility for his prior actions. That true and basic heroism is what sets him apart and makes him a good man, a great leader and, ultimately, the Avenger to stand beside. 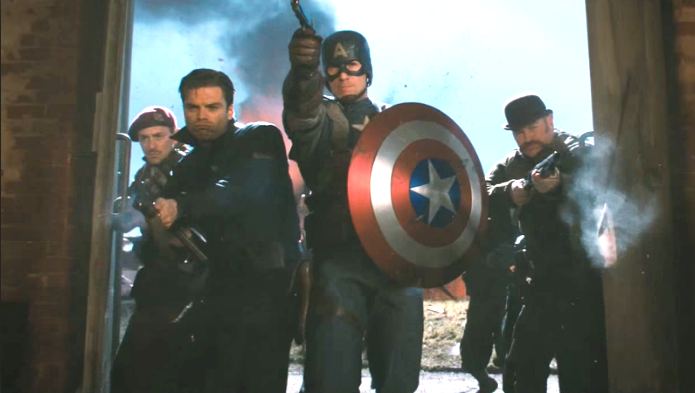