A Filmmaker’s Take on Scene Structure: Mini-Screenplays and the “Wait, What?” Moment

As a filmmaker and a film-lover, I watch a lot of movies. I also write and read a lot of screenplays. I’ve written, directed, and secured distribution for two feature films, and I currently develop story at a major Hollywood animation studio. What I’m trying to say is: Clearly, you should cherish the priceless pearls of wisdom that are about to fall out of my mouth.

I often read screenplays from students currently enrolled at my alma mater, and—from the thousands of Final Draft pages that cross my desk—I’m sometimes rewarded with a little newfound insight. One such insight is this one: The structure of a properly-written scene is the same as the structure of a screenplay as a whole. Scenes employ on a micro-level the same mechanics that the screenplay itself employs on a macro-level. Basically, scenes are like mini-screenplays.

For example, in The Godfather (1972) our protagonist, Michael (Al Pacino), the “good son” of Don Corleone (Marlon Brando), is committed to his normal, non-criminal future until his father declines an enticing narcotics partnership and is gunned down, leaving Michael – tragically, the most capable son – to assume his father’s criminal mantle. This inciting incident happens about a quarter into the three-hour film, which is proportionately fitting for screenplay structure. Immediately after Don Corleone is gunned down, the film cuts to Michael’s reaction – an important point to remember later – and, thus, Michael’s journey begins. 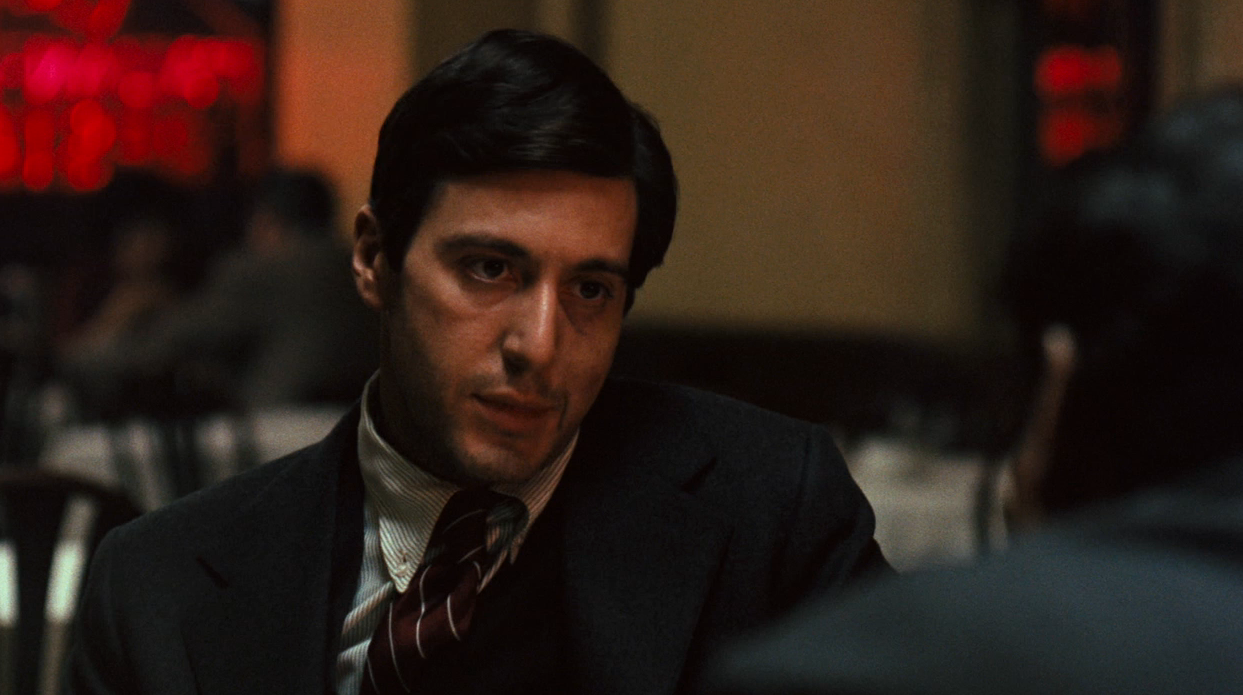 Al Pacino as Michael Corleone in The Godfather

Almost every successful film or story, regardless of genre or however seemingly inventive the work may be, uses some variation on this structure. The reason is because, as an audience, our basic desire is to watch a protagonist be confronted with the unexpected. Why? Because that’s what stories are in real life. They’re the stories of how your soulmate suddenly entered your life, of how your house burned down and you had to rebuild everything, of how you were betrayed at work and unjustly fired, or of how you lost your dog on a road trip and it found its way home to you months later.

At the start of Die Hard (1988), John McClane (Bruce Willis) travels to Los Angeles to win back his estranged wife. Then, as he’s visiting her at her office holiday party, holy cow! Terrorists attack! Now that was not at all expected. For the rest of the film, we see McClane react to this crazy upheaval in his life as he tries to defeat the terrorists and return his life to a normal, terrorist-free state.

Now, none of our lives — unless you’re a secret agent who moonlights as a NASA astronaut — literally compares to Die Hard, but we all can relate to the idea of having a plan, only to see it go completely snafu.

1. The story doesn’t heighten. I hate the phrase “raise the stakes,” a largely misunderstood phrase that gets the idea all wrong and often leads to fate-of-the-world hackery. Good stories don’t “raise the stakes.” Rather, they heighten and explore the idea of their premise to new, exciting and, hopefully, ultimate levels. A good example is What About Bob? (1991), which hilariously heightens the film’s premise by finishing with the absolute worst thing possible: Bob Wiley (Bill Murray) marries the beloved sister of Dr. Marvin (Richard Dreyfuss).

2. As I’ve said, nothing unexpected happens in the scenes; by which I mean nothing that a character doesn’t expect, not necessarily that the audience doesn’t expect, happens. We all know the Titanic will sink, but the characters don’t, so Titanic (1997) still works.

The same rules apply to the internal structure within a scene. In a successful scene, a character begins with one expectation or plan for how events will transpire, but then things play out unexpectedly via what could be called the inciting incident of the scene itself (although this incident doesn’t necessarily need to happen in the first quarter of the scene.) Typically, the scene then heightens and explores its idea over a series of beats. For example, in The Godfather, an incensed Sonny (James Caan) pulls up to a toll booth, pays and expects to pass. However, he then discovers what he never expected: that he’s been set up to be gunned down at the toll booth. We see the realization on his face, and the scene then quickly ends with his death. 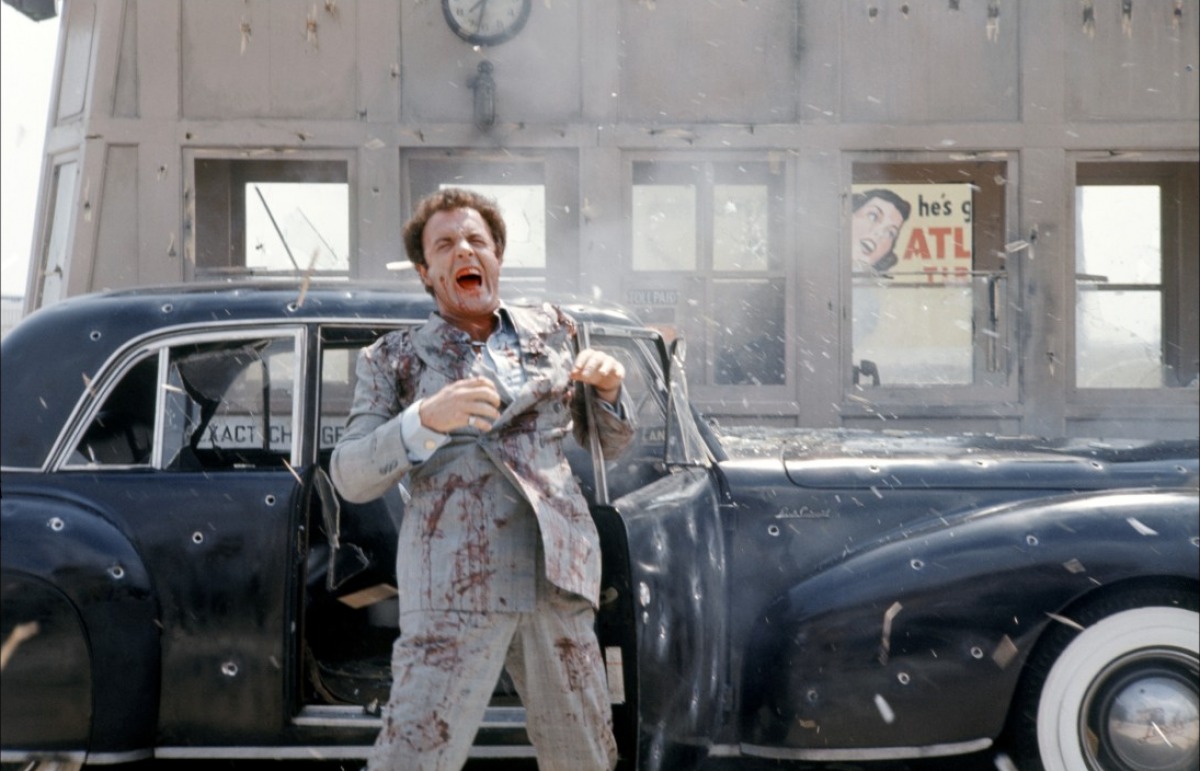 James Caan’s Sonny Corleone Gets Gunned Down in The Godfather

Sonny’s realization that he’s been set up is the scene’s most essential moment. It happens right after the inciting incident of the scene – when the toll booth collector ducks and things suddenly seem amiss. I like to distill this moment with a very simple name: I call it the “Wait, What?” Moment. Something unexpected happens in a scene and a character goes, “Wait, what?”

Watch every good scene ever and you’ll see some character, big or small, have this moment. I guarantee it.

Check out the first 4 minutes and 15 seconds of this scene from Rocky (1976) (and then watch the whole thing, really, because it’s all great):

This scene shows the final fight of the film. Apollo (Carl Weathers) expects the fight to be a walk in the park, so he toys with Rocky (Sylvester Stallone). Then, out of nowhere, at minute 0:54 in the YouTube clip, Rocky busts out an amazing left hook, knocking down a completely stunned Apollo. That unexpected punch is the inciting incident within this scene, and the rest of the scene deals with how the characters respond to this surprise moment. Not only was Apollo not expecting Rocky to be a real opponent, but Rocky himself was also not expecting to be able to stand up to Apollo, as evidenced by his wonderful, unbridled excitement (his “Wait, What?” Moment). Driving the point home, the announcer even exclaims, “What a surprise this is!” This scene is textbook scene-writing.

Here’s another great scene from, again, The Godfather that uses the exact same mechanics as the Rocky scene: A character encounters the unexpected, and is then forced to act and make choices to return the situation to normal (which, in this case, is safety for his ailing father). Can you identify this scene’s inciting incident and Michael’s “Wait, What?” Moment?

(I’m sure you got it, but the scene’s inciting incident is the gradual discovery that his father’s guards have abandoned his father, and the “Wait, What?” Moment is when Michael realizes this fact and asks the Nurse why they left. Everything afterward is Michael responding to that inciting incident and returning the situation to normal.)

Here’s one more scene from Forrest Gump (1994) with the same mechanics:

Isn’t it wild that the structure of each of these scenes, on a micro-level, mirrors the structure of screenplays as a whole? The mini-inciting incidents and the “Wait, What” Moments in these three examples do for their respective scenes the same thing that Don Corleone’s attempted assassination and, in the following scene, Michael’s immediate reaction to the news in a newspaper do for The Godfather as a whole. A character encounters the unexpected and is then forced to act to return things to normal or to establish a new normal.

(Side note: Because these scenes’ structures so successfully mirror the structure of a larger story, you can enjoy them as isolated YouTube clips. They nearly stand alone as short films unto themselves, even outside the context of the greater film of which they are a part.)

When a screenplay’s scenes fail to function this way, the film is boring. As Howard Hawks famously said, “A good movie is three good scenes and no bad scenes.” Understanding this truth is part of understanding the most important thing to know about screenplays: at the end of the day, screenplays are entirely mechanics. Every scene, joke, emotional moment, everything: they are all products of mechanics and structure. Everything else – dialogue, symbolism, theme, message, etc. – is a shiny ornament on a Christmas tree.

You don’t write a screenplay. You construct it.