Why can’t teen dramas handle the transition to college?

Quick Answer: Ever since the arrival of Beverly Hills, 90210 in 1990, teen dramas have become ubiquitous. In addition to sharing a number of key characteristics, teen dramas commonly share a frequent inability to successfully transition from high school to college. When teen dramas do continue into college years, the change can be bumpy, isolating characters and fracturing storylines in the process. As a solution, producers often try to “age up” teen dramas. They have their teenage characters engage in the risqué behavior one would expect to see in college, making salacious college dramas redundant.

Although teenagers and their dilemmas have been part of the television lexicon for decades, it wasn’t until Beverly Hills, 90210 (1990 - 2000) that the teen drama as we know it became ubiquitous and standardized. The show ushered in certain tropes and characteristics that have come to define the genre: ensemble casts, topical issues and the melodrama that often accompanies navigating high school.

Teen dramas also commonly share an innate limitation in their frequent inability to transition from high school to college. High school, it seems, provides the structure and security that teen dramas just can’t seem to replicate once their characters graduate. When teen dramas do continue into college years, the change can be bumpy, isolating characters and fracturing storylines in the process. As a solution, producers often try to “age up” teen dramas, having their teenage characters engage in the risqué, salacious behavior one would expect to see in college, if not full-fledged adulthood. Notable exceptions, such as Beverly Hills, 90210 and Gilmore Girls (2000 – 2007), got many, if not all, of their teen characters through four years of college. Even so, many of the shows’ characters took time off of school to start careers, have babies or deal with the consequences of poor decisions. As a result, the ongoing drama was not rooted in college the same way that it had previously rooted in high school.

These exceptions aside, teen dramas for the most part do a terrible job managing the transition. Some shows attempt to send the students off to different schools after graduating, which tends to isolate the characters and disrupt the narrative arc. Dawson’s Creek (1998 - 2003), for example, sent its students to different colleges, which was at least a much more truthful approach to fictional education than many of the show’s contemporaries. But although the scattering of Capeside High School’s students may have been an attempt at realism, the show’s storyline suffered and became fractured as a result. The producers eventually had Dawson (James Van Der Beek) drop out and return to Capeside, even though he had dreamt of attending USC’s film school since the pilot. Dropping out has proved to be a reliable crutch for TV’s fictional teens. While Glee (2009 - 2015) sent many of its high school graduates off to different colleges, Rachel (Lea Michele) ultimately dropped out of NYADA, the fictional New York Academy of Dramatic Arts. Others, like Santana (Naya Rivera), left their respective schools as well.

On other shows, it is often the case that come senior year, a never-before-mentioned Ivy League-caliber college will magically appear in the students’ hometown. Not only that, but said college will conveniently suit the academic needs of valedictorians and D-students alike. For example, when Beverly Hills, 90210‘s bookish Andrea Zuckerman (Gabrielle Carteris) earned a scholarship to Yale, she decided on California University instead, which the brash Steve Sanders (Ian Ziering) also attended.

For some shows, the transition is difficult because depicting an academically rigorous environment betrays the already established drama-filled tone. Gossip Girl (2007 – 2012) conveniently had its characters attend colleges in New York — the producers tried to send the driven Blair (Leighton Meester) to NYU with Dan (Penn Badgley) and Vanessa (Jessica Szohr), and later to Columbia with Nate (Chace Crawford) — but the show soon returned to its melodramatic, not especially academic roots. By the third season, the producers threw up their hands and put college on the back burner for all; everyone but Blair ditched college to start fabulous careers, while Blair married a prince. 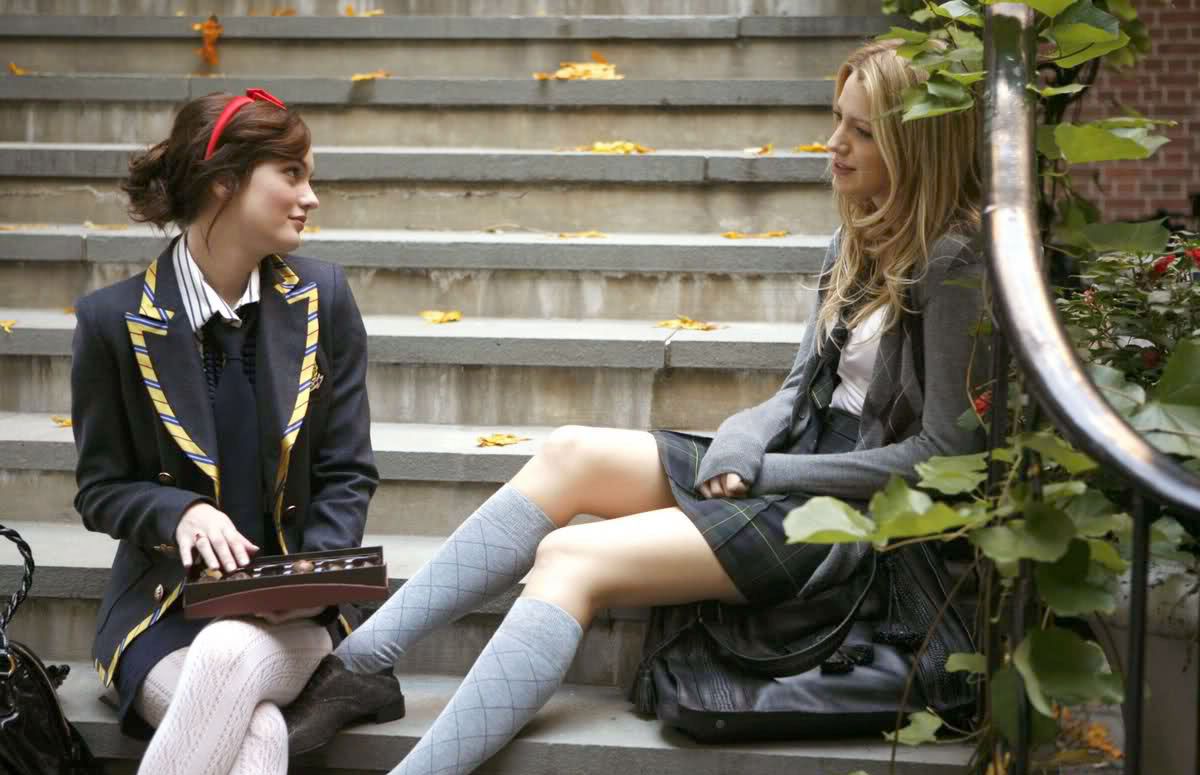 90210 (2008 – 2013), the revival of the iconic teen drama, also proved to be only marginally invested in academics. While the show sent Annie (Shenae Grimes) to college, she spent much of her time as part of an escort service and not much time hitting the books.

Other teenagers are simply too busy fending off vampires to worry about advancing their academic careers. Buffy the Vampire Slayer (1997 - 2001) tried to follow Buffy (Sarah Michelle Gellar) and Willow (Alyson Hannigan) into college but gave up after one season. Buffy dropped out to take care of her heretofore nonexistent teenage sister, and Willow got hooked on “dark magic.”

The Vampire Diaries (2007 - ) also made a minimal attempt, sending three of its bloodthirsty characters to the local college. Elena (Nina Dobrev) intended to pursue medicine, and Caroline (Candice King) — who never participated in so much as a school play — selected theater as her major. Witch Bonnie (Kat Graham) briefly studied Occult Studies at the same college, but the constant peril the characters were in (not to mention Dobrev leaving the show) forced them to give up on college. The most recent season jumped ahead three years and showed that almost all of its characters had forgotten about college or careers. Speaking of time jumps, some shows, anticipating the bumpy transition into collegiate life, opt to skip some (if not all) of the characters’ college years. Before it was cancelled, the team behind Veronica Mars (2004 - 2007) was considering doing exactly that after Veronica’s (Kristen Bell) freshman year, skipping ahead to her time in the FBI. Pretty Little Liars (2010 - ), like One Tree Hill (2003 - 2012) before it, decided to simply leap over college and come back for a new season with the characters five years older. Awkward (2011 - 2016) also skipped over the first year of college. The second half of the show’s final season took place the summer after the gang’s freshman year.

In theory, the move to college should be a good thing for teen shows. College is seemingly a rich setting to explore personal growth, relationships, and, of course, drama. While watching someone read stacks of books, write a paper or work on problem sets offers little entertainment, college is a place of personal freedom. No longer held back by parents, young people try new things and make their own rules. Additionally, the window into college life should be enticing for teen viewers who wonder about the future. Seeing as the primary viewers of teen dramas are often younger than the characters, we would think college dramas would offer them the “wish fulfillment” that teen-focused networks like The CW and Freeform (previously known as ABC Family) have long aspired to provide.

But because teen dramas, like much young adult fiction, are often about characters who feel misunderstood by their families or lack any discernible role models, many teen TV characters have had a shocking amount of freedom since they were first introduced as high school sophomores or juniors. This minimal amount of (or in some cases, complete lack of) parental supervision give teens total leeway to drink, do drugs, solve mysteries and hunt and/or have sex with vampires. By the time these students get to college, they’ve already run the gamut of salacious behavior. Even if the teenagers in question aren’t especially rebellious or resentful of their parents — here’s looking at you, Rory Gilmore — producers still go at great lengths to keep them anchored to their hometowns and families. Maybe college doesn’t work for these shows because, while university life is freeing for many actual kids, it’s too restricting for today’s teen shows, which have almost entirely dispensed with classroom scenes and story lines about actual schoolwork. Maybe it’s because the networks insist on hiring actors in their 20s to play young teens, and as the actors age into their 30s it seems increasingly preposterous to see them as adolescents. Maybe today’s audiences, who have already seen every universal teenage storyline under the sun, get bored with the same trite, generalized depictions of college. (How many times can we see someone applying for a scholarship, learning about the perils of binge drinking or getting “sexiled” from their dorm room?) As I have written about in the past, TV gets academia wrong when it comes to faculty and staff. It does not do much better with student life.

But maybe the networks are not giving audiences enough credit. It is possible that teenagers are seeking true-to-life dramas that cover more than underage drinking and high school hookups. It’s also possible that we’ve reached a point where TV, even the melodramatic world of teen dramas, should reflect more sobering realities. Once the financial crisis hit in 2008, the teen-focused networks regrouped by developing shows that concentrated less on the devil-may-care, privileged lives of rich kids. In today’s post-recession world, millennials have a lot to think about before investing in a college degree that may not result in a job that pays enough to repay their student loans.

Still, setting aside network concerns about whether college is salacious enough or too academic, today’s teenage audiences deserve to see their favorite characters succeeding in college or moving beyond high school in other productive ways. Even if the real-life college transition is challenging and far from smooth, why not show teens a future to which they might aspire?