What tropes and themes did “Halloween” help introduce to the horror genre?

John Carpenter’s Halloween (1978) is one of the most profitable independent films ever produced. Shot on a low budget with a mostly unknown cast and limited resources, Halloween became an iconic piece of cinema that influenced generations of horror films that followed. It was largely responsible for the popularization of slasher films throughout the 1980s, and helped define a number of themes and tropes that are now considered classic staples within the horror genre.

A major trope in Halloween is the concept of the “final girl,” or the notion that only one female character manages to survive the picture either by defeating the villain or escaping, emerging as the victor capable of telling the story. She is typically virginal and often possesses an asexual name. The term was coined by film professor Carol J. Clover in her 1992 book “Men, Women, and Chainsaws: Gender in the Modern Horror Film.” She theorizes that at the end of a slasher film, the final girl becomes masculinized and, with the help of a phallic tool (knife, saw) takes down her aggressor. The idea is that the final girl becomes a heroine who survives without the help of a man.​ 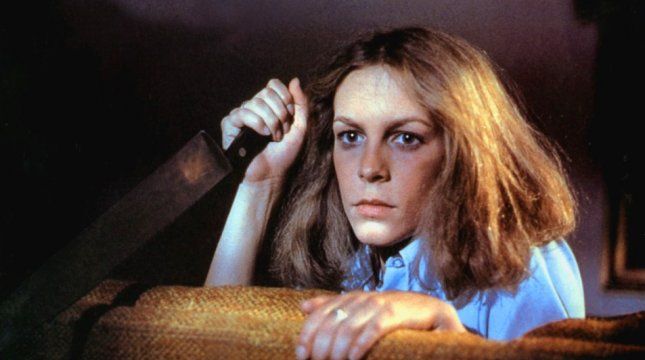 Within Halloween, this trope has been contested by some critics on the criteria that final girl Laurie Strode (Jamie Lee Curtis) only survives thanks to luck and intervention on behalf of a man, Dr. Loomis (Donald Pleasance). Though she attempted to take down the killer, she failed, and Loomis stepped in to offer protection. Others refute that notion on the basis that Loomis eventually dies in the second Halloween picture while Laurie perseveres through a number of subsequent Halloween installments. Plus, Laurie’s actions would have killed a normal man, which Myers was not, rendering her failure to protect herself moot against the more substantial fact that she tried.

Examples of “final girls” in films include Ripley (Segourney Weaver) in Alien (1979), Lila Crane (Vera Miles) in Psycho (1960), Alice (Adrienne King) in Friday the 13th (1980), Mia (Jane Levy) in The Evil Dead (2013), and Erin (Sharni Vinson) in You’re Next (2011). The trope has been the subject of discussions about the slasher genre and gender on a broader level, relative to sadistic voyeurism and the genre’s relationship to feminism.

The Texas Chainsaw Massacre and Black Christmas (both 1974) are two horror films with the “final girl” trope that pre-date Halloween, but Halloween helped put it on the map in a major way.

Halloween has also been studied as a critique of American social values. Parents are unavailable during the duration of the film, unable to protect their children during the film’s attacks. A bigger, related theme in Halloween is sex—namely, premarital sex and the thematic dangers of the act. Many of the film’s murders take place in juxtaposition with sexual acts. The main characters find babysitting an opportunity to drink and engage in intercourse, during which each of them is killed. Even the film’s introduction shows Michael Myers killing for the first time, murdering his sister after she was too busy having sex with her boyfriend to pay attention to him.

Carol J. Clover notes the slasher genre is fueled by a psychosexual fury, as the act of murder with a knife is sexual in nature. Projectile weapons never exist in slasher films, and murder by stabbing is widely considered an intimate means of dispatching someone. In Halloween, Laurie Strode is the one character not preoccupied by sex, and thus becomes the final girl that survives.

As AMC’s FilmSite explores, “Halloween set in motion the Puritanical, psycho-pathological principle that one’s survival was directly proportional to one’s sexual experience. It also asserted the allegorical idea that sexual awakening often meant the literal ‘death’ of innocence (or oneself). With the title character Laurie, a virgin, she is able to escape mostly unscathed (as does the asexual Dr. Loomis and the young pre-teen Tommy Doyle), but others who are more promiscuous and sexually-charged are less fortunate and suffer deadly consequences as victims. In this film, murders often occur after sexual encounters when victims are distracted and off-guard.”

This sex-death connection permeated tons of subsequent slashers, from Prom Night (1980) to Graduation Day (1981), Silent Night, Deadly Night (1984), Chopping Mall (1986), and Scream (1996). The Friday the 13th franchise may be the most prominent use of this trope, regularly telegraphing character deaths through the act of sex.

Films like Halloween explore the dark side of suburbia, mocking the safety and sanctity people find in life outside a city environment. Michael Myers is a suburban child who murdered his sister, spent his developmental years in a mental asylum, and broke out to return to killing in his suburban hometown. He is a product of that environment. The bulk of slasher movies that follow Halloween take place in suburban settings, as it provides a shocking backdrop for this type of series of events.

A couple hundred thousand dollars, an innovative script, a darkly threatening musical score and a $2 William Shatner mask not only created a film that earned its place as a classic in cinematic history, but inspired scores of films that followed in its legacy. Halloween is a definitive piece of horror history, and its impact and legacy continue to bleed into new slaher titles each year.