What real-life battles did “Game of Thrones” use as inspiration for “The Battle of the Bastards”?

Quick Answer: Game of Thrones’ epic “The Battle of the Bastards” is primarily based on the Battle of Cannae in 216 BC, during the Second Punic War. Ramsay’s double-envelopment tactic is taken from Hannibal’s innovation to trap the Romans, seen as a crucial moment in war history. The dominance of Ramsay’s long-range archers also takes inspiration from the Battle of Agincourt between the French and English in 1415, part of the Hundred Years’ War. The piles of bodies large enough to cause an obstruction are drawn from reports of the American Civil War.

The Battle of the Bastards in Game of Thrones (2011 - ) Season Six, Episode 9, was a fight so profound in scale and expense it’s hard to fathom it took place inside one episode of television. There were grand, sweeping shots of Braveheart (1995)-like combat, and others akin to the gritty, in-your-face steadicam opening of Saving Private Ryan (1998), all seasoned with Game of Thrones’ distinct brand of fantasy. Like so much of Game of Thrones’ story, many details of the battle were inspired by real-world historical events.

The fight itself, according to episode director Miguel Sapochnik (who also helmed the epic “Hardhome” battle), was based on real Roman wars— specifically, the Battle of Cannae between the Romans and the Hannibal-led Carthaginians in 216 BC. It was a fight during the Second Punic War in which Carthage defeated the Romans by using a double-envelopment tactic, much like Ramsay’s method of encircling Jon Snow’s forces with a wall of shields and spikes that slowly presses forward. While the Carthaginians were the smaller force in the actual scuffle and were ultimately victorious in their battle, their tactics translate to Ramsay’s on television. The Battle of Cannae is considered one of the most significant battles in all of history, regarded by military historians as the ultimate demonstration of a victorious use of double envelopment, or the “pincer movement.” 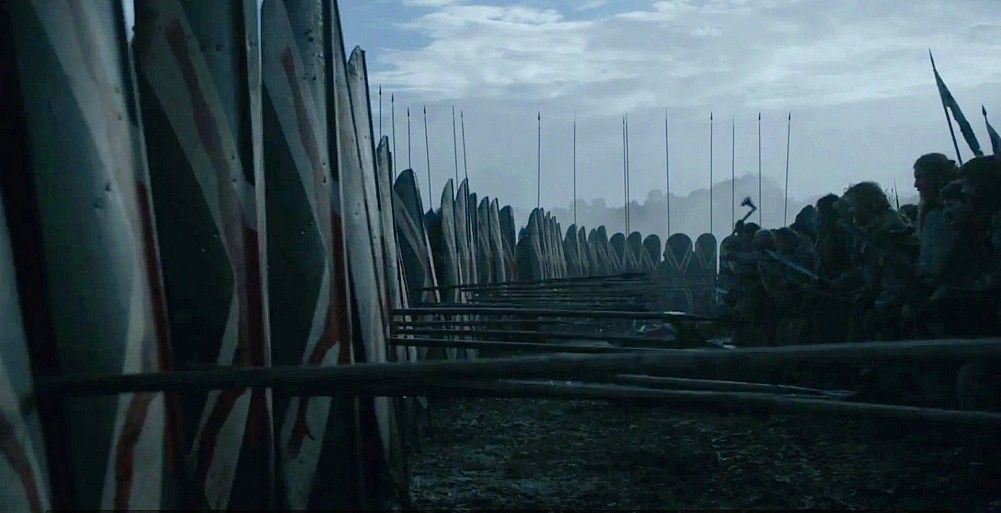 In that battle, the Romans faced southwest, with their right edge on the Aufidus river and the sea about three miles behind them. They placed their 6,000 fighting men on their wings and compiled their infantry in a deep and narrow formation, attempting to push against the core of the opposing threat. As a countering tactic, Carthage’s Hannibal relied on the elasticity of his formation. He stationed his Gallic and Spanish infantry in the middle, two of his African troops on their flanks and the cavalry on the wings. The key was that before physically engaging the Romans, his line adopted a crescent shape. His cavalry easily won the struggle on the wings, and began to sweep around behind the enemy.

Crucially, Hannibal’s core forces did not break. As a result, the Roman center was drawn into a trap. Hannibal’s crescent morphed into a circle, as African and Spanish troops on the wings pressed inward and the Carthaginian men attacked from the rear. Some of the equipment used by Hannibal’s soldiers, particularly shields, were looted from dead Romans after the previous Carthaginian victory at Trasimene, a fact that helped confuse the Romans. Pressed tightly together and unable to use their arms within the circle, the Romans were surrounded and cut to pieces by Hannibal’s men. Of course, the result wasn’t instantaneous. The double envelopment was so strong and durable that it took hours for the Carthaginians to kill all the Romans trapped within. Hannibal even ordered his soldiers to merely cut many of the Romans’ hamstrings so they could ensure immobility and slaughter them later at a more leisurely pace. 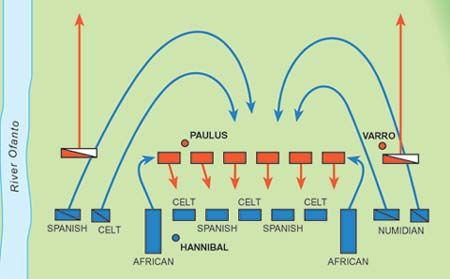 A diagram of Hannibal’s double envelopment against the Romans

In Game of Thrones, the shield wall with spears used by Ramsay is a hybrid of an Anglo Saxon shield wall and an Alexandrian Hellenistic phalanx. Alexander was the innovator of using longer spears to gain standoff distance between opponents. This battle also marked Game of Thrones’ first use of the scutum, a long, heavy, body-length shield originally innovated by the Romans.

During the “Inside the Episode” segment following “The Battle of the Bastards,” showrunner D. B. Weiss said, “From the beginning we knew that one thing we’d never had on the show was a true medieval pitched battle where two sides bring all the forces they can into play in some battlefield that’s somehow negotiated or agreed upon, and they go at each other until one of them wins and the other one loses. This is a staple of human history, and we started to look through film samples of it. There really wasn’t one that both made you feel what it was like to be there on the ground and gave you a sense of the geography of the battle.”

In order to build a unique fight scene, Sapochnik told EW, “I watched every pitch field battle I could find (footage of real ones too), looking for patterns — for what works, what doesn’t, what takes you out of the moment, what keeps you locked in. The big reference was Akira Kurosawa’s RAN (1985).”

Sapochnik did not want to rely on top-down views of the battlefield to establish scale. “The strategy and tactical aspect was a key thing for David [Benioff] and Dan [Weiss]. They wanted to specifically focus on that so that we could really see the way Ramsay ensnares and outguns Jon in the almost exactly the way the same way Davos had planned to defeat the Bolton army. I also did a bunch of research into Alexander the Great who was legendary in his strategic battle prowess. That said, at some point you need to put all the research down and tell a good story. The Bolton Shield wall, for example, was a production-friendly way to emulate a ‘double envelopment pincer move’ [without] using horses as originally scripted, and also as a way to avoid seeing horizons on the field and therefore having to dress fewer dead bodies or stage background fights so deep because we didn’t have the money. I also really liked the visual of a wall of Bolton red and white crosses on the shields. It felt very fascistic and graphic.” 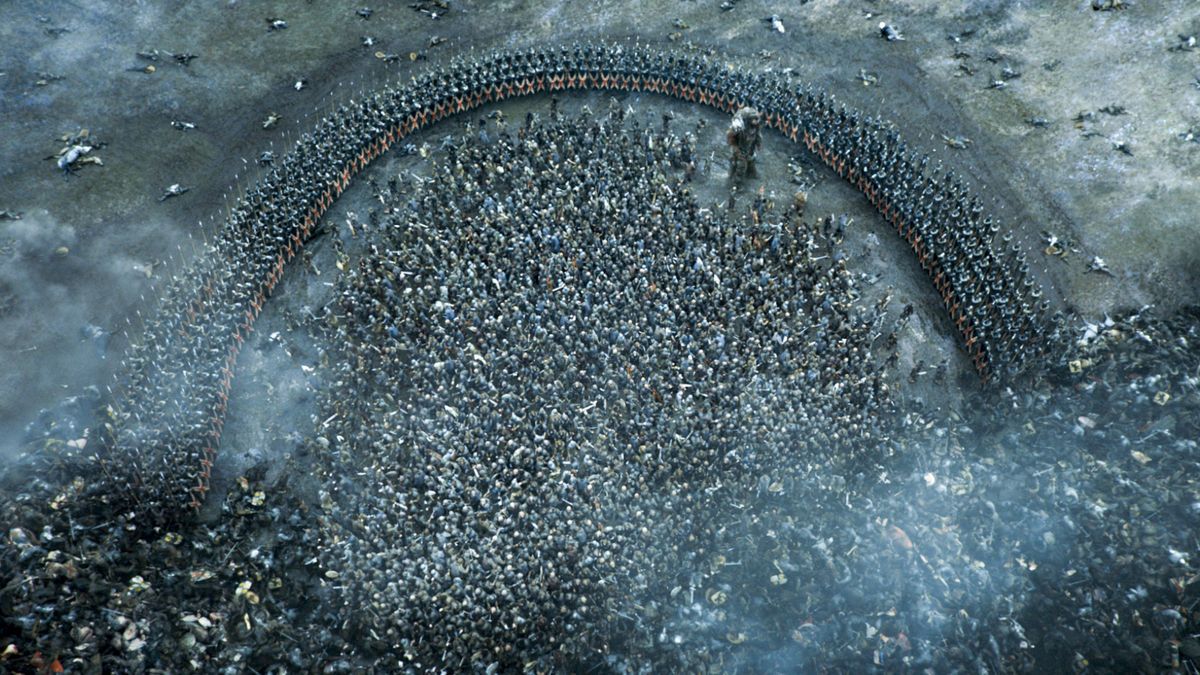 Initially, the fight was to be based on the Battle of Agincourt between the French and English in 1415, remembered in Shakespeare’s “Henry V” and the most famous of battles in the Hundred Years’ War, during which a double envelopment was also utilized. More directly, Agincourt was the first major battle to employ the longbow, making long-range archers a dominant force in melee combat. England managed to defeat a much larger French army by supplying an endless torrent of arrows that kept fighters at a distance. The battle may not have been the ultimate primary inspiration for the Battle of the Bastards, but the DNA of archer-heavy combat remains in tact.

Meanwhile, the idea for piles of bodies large enough to cause a legitimate obstruction on the battlefield was drawn from reports of this happening during the American Civil War, which lasted from 1861-1865. The showrunners felt it added to the claustrophobia and intensity of the ground-level fighting, putting the viewer in the thick of the fight in a way rarely seen in other depictions of war. 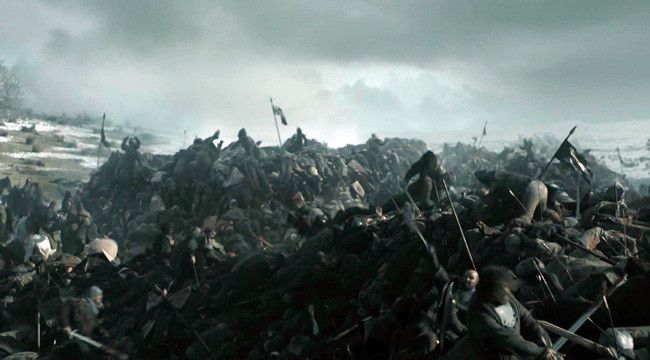 Heaps of bodies during the battle

The episode required hundreds of extras and crew members, 160 tons of gravel, 70 horses, almost a month of shooting and extensive use of creative camera work and rigging. Sapochnik called it “the most logistically complicated thing” he has ever done. In discussing the episode, the showrunners emphasized that much of what we see is real, contrary to our expectations of purely CGI sequences.

For more on the construction of the fight scene, see this “Anatomy of a Scene” video by HBO:

Within the narrative, the Battle of the Bastards was a surprise win for the Starks, a family notoriously trampled by the more ruthless parties in the Game of Thrones world. With the Boltons removed from power, everything is changed in the North.