What is wrong with the McCallister family in the “Home Alone” films?

Everyone knows the McCallisters, the absent-minded gang from Home Alone (1990) who consistently forgets that the primary ingredient in a family vacation is the family. With an inexplicable desire to travel far from home each Christmas season, their poor planning skills repeatedly leave little Kevin McCallister (Macaulay Culkin), the youngest of the high-class suburban Chicago bunch, stranded in unbelievable ways. During the stories of Kevin’s time spent alone, we watch him relish his freedom with the realistic enthusiasm of an unsupervised child, bring the Christmas spirit to people who have something missing in their lives, and build insanely complex, criminal-vexing traps that only someone with an engineering degree, a crew of people, and an expansive budget could realistically produce.

Two and a half decades ago when Home Alone first hit theaters, it appeared to be the perfect family Christmas film. However, after decades and dozens of viewings, a realization starts to form: something is wrong with the McCallister family. It’s not just that they bicker like middle-schoolers. It’s not even that they’re dumb enough to leave their youngest kid alone in random locations. No: there is something fundamentally wrong with the way they behave and think.

While few fathers would let their brothers yell at their children for minor household infractions, Kevin’s father doesn’t curtail the monstrous Uncle Frank. Established as a villain from the start, Uncle Frank’s awfulness doesn’t contribute anything to the story beyond illustrating what a dysfunctional bunch the McCallisters are. He is rude, selfish, and has a terrible sense of humor. He is a cheapskate, a quality established early on by his avoidance of contributing to the family’s pizza dinner (“Traveler’s checks!”) and his desire to steal glasses from the airplane (“It’s real crystal!”). When Kate (Catherine O’Hara) finally realizes Kevin has been left behind (because, apparently, none of the other kids on the plane noticed Kevin wasn’t sitting with them), Frank tastelessly jokes that he also forgot his reading glasses. Finally in Paris, while everyone is sitting around discussing their youngest member being alone on the other side of the globe, Frank is busy serving up shrimp cocktail with merriment that should be impossible for him to muster in such a situation.

Frank joins the family again in Home Alone 2: Lost in New York (1992) at his brother’s expense, but not before reminding us he’s still the same old Frank with the heartwarming line, “Get out of here you nosy little pervert or I’m going to slap you silly!”

However dreadful he may be, Frank is only an uncle. The truly poor parenting falls on Peter and Kate. One of the first things we hear out of Peter in the early moments of Home Alone is: “My new fish hooks?” This guy owns a $2+ million Winnetka house, and he’s whining about his son making Christmas ornaments with 49 cents worth of fish hooks. Peter and Kate do very little in defense of Kevin early in Home Alone, a negligence that can be clearly observed in a scene when Kevin becomes angry because his brother, Buzz, has somehow eaten an entire cheese pizza in two minutes time. Someone ought to be worried about Buzz, but Kevin, instead, takes the brunt. These are the same parents that assumed their eight year old son was then independently responsible enough to wake up on time, get in a van, follow a running crowd through an airport, and board and seat himself on an international flight to Paris without any assistance whatsoever.

“How could we forget him?” Kate wonders.
“We didn’t forget, we just miscounted,” Peter replies.

When the family tries to get home to Kevin from Paris, there are no flights into Chicago. Kate, attempting to be a good mother, hitches a ride with a polka group because she has a strong maternal desire to get back to her son. Peter decides to wait and take a flight in the morning with the rest of the family. As it turns out, both parties get home just a few minutes apart, and Peter makes sure to have an “I told you so” moment because that is what his skewed priorities deem necessary at the time.

Kate’s determination to get home is one of the only believable human responses in the film, although it remains marred by the way she tolerates the ignorance of outside help. A policeman, possibly the worst cop in the history of cops, stops by the house, where Kevin hides out of fear, so Kate responds by moving on to the next idea. A realistic mother would be adamant that a team of cops check the house, break down the door if necessary, and find out where the kid is hiding or where he might have gone. 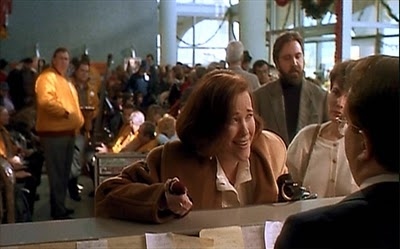 The weirdest part of the McCallisters’ eventual reunion with Kevin is its brevity, again ushered by Peter. The conversation between him and Kevin is, to paraphrase, “Hi son! You’re not dead! That’s great! Oh no, we don’t have any milk, and stores aren’t open. What? You bought milk? What a funny guy! Seeya!” The family then simply walks off. This family left their young son home alone for days, traveled to the other side of the world, immediately turned around, and then don’t even spend 60 seconds with him once they get back. What is wrong with these people?

These are characters who don’t learn anything from their mistakes, a fact that becomes obvious when they repeat the process the very next year.

Home Alone is a Christmas franchise with a lot to meaningful things to say about the value of family and the importance of overcoming differences, especially around the holidays. Strangely, though, it doesn’t use its central family to say any of it. The core sentimental peaks in both films relate to Kevin’s relationships with ancillary characters only in contact with Kevin, who have nothing to do with the other McCallisters. 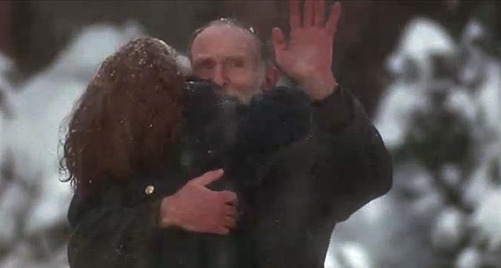 In the first film, the feel-good scene is shared between Kevin and Old Man Marley (Roberts Blossom). Kevin looks out the window, peers across the snow-covered Christmas landscape, and sees Marley embracing his son for the first time in years. The moment is the result of an earlier conversation between Kevin and Marley, wherein both characters taught the other something about family, togetherness, and overcoming fear. It happens just after Kevin’s family finds their way back to the house and is the much more poignant of the two reunion moments. 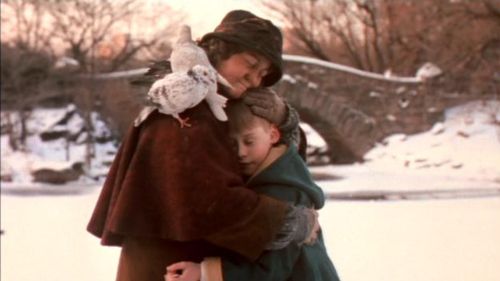 In Home Alone 2, the sentimental climax occurs between Kevin and the Central Park Pigeon Lady (Brenda Fricker). She saves his life, and he, in turn, gifts her half of a pair of turtle doves given to him by Mr. Duncan (Eddie Bracken) earlier in the film. The doves symbolize the friendship they’ve established and again are symbolic of both parties overcoming fears and prejudices.

In neither film does Kevin’s return to his core family provide holiday charm, as if John Hughes realized the McCallisters are too terrible to provide the right amount of cheer. The final line of both films is heard off-camera, from a member of Kevin’s family, whose demeanor reveals business is already back to usual within the McCallister ecosystem: 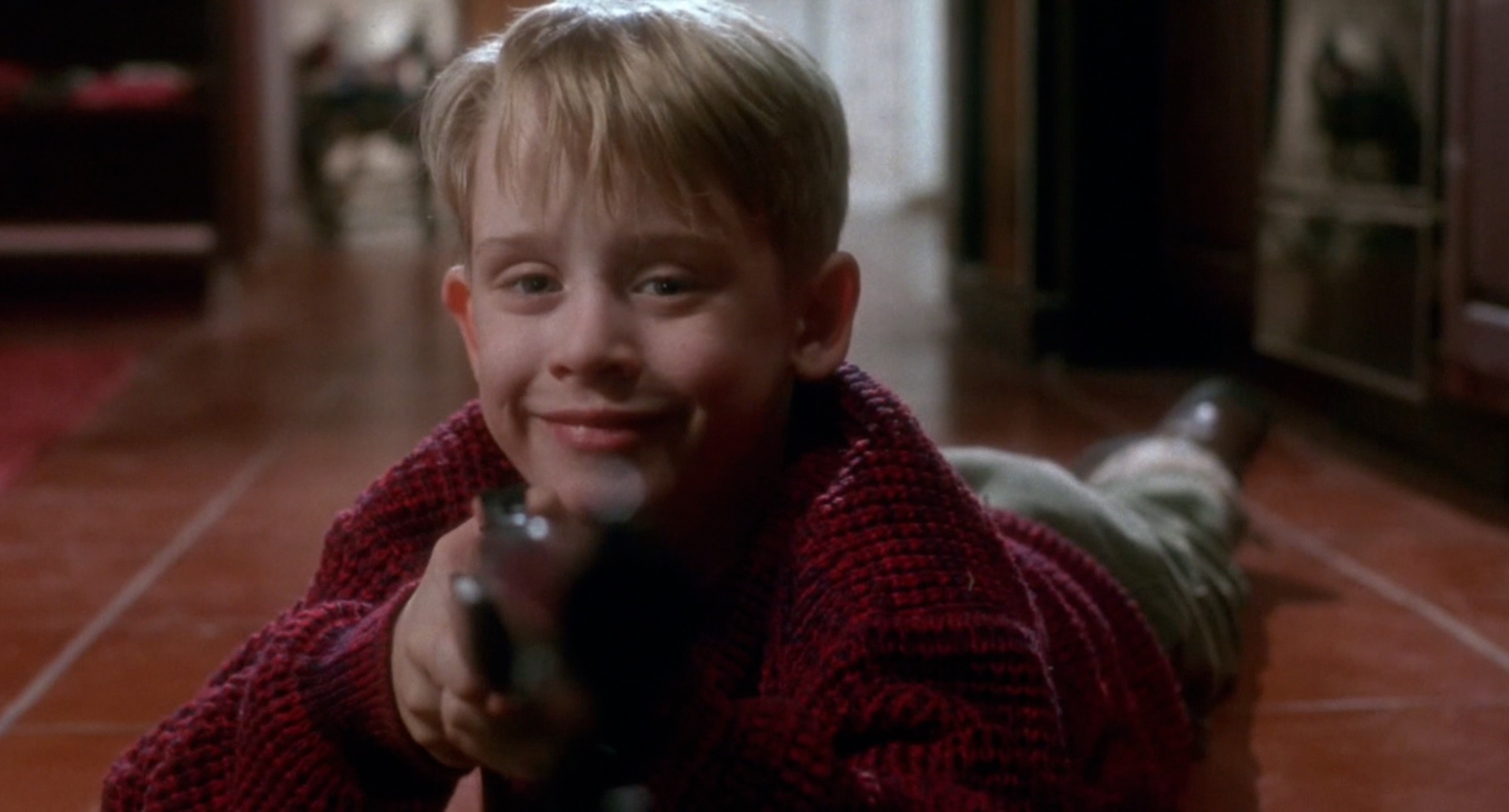 What are the psychological effects of this family on Kevin? Certain analysts have decided he shows signs of serious mental problems. He is highly intelligent but talks to himself constantly; has an apathetic outlook on violence (he doesn’t call the cops until after maiming the crooks); shows disregard for most other humans; identifies with awkward, socially-outcast adults rather than other children; has a questionably overactive imagination; shows easy signs of territorial aggression and lack of remorse; and succumbs to impulsivity (“I need to change my Talkboy batteries now!”). Kevin clearly needs attention. The family is big, but not big enough that he should be so ignored and develop such an idiosyncratic personality.

None one of this prevents Home Alone and Home Alone 2 from standing as part of Christmas tradition for millions of people year after year. Many of the McCallisters’ oddities simply service the story. Very few elements of Home Alone’s narrative make any logical sense, so the fact Kevin’s family is such a band of nuts shouldn’t come as much surprise. The films are to be taken with the same seriousness as a cartoon, full of ludicrous and chimeric moments that entertain and offer a little bit of holiday sentimentality - just don’t look to the McCallisters for peace on earth and goodwill toward men.