What is a “Hitchcock Blonde”? How did the term develop?

Quick Answer: The Hitchcock Blonde, or “icy blonde,” is a beautiful, sophisticated, poised woman who carries with her an air of mystery and indirect sex appeal. She carries the film as an unexpected source of duplicity, and can be a cunning and intelligent adversary. She also represents Hitchcock’s idea of a perfect woman.

One of the most esteemed directors in the history of filmmaking, Hitch was also a peculiar man with numerous obsessions, chief among them women and, specifically, blondes. All of his most renowned films feature a blonde in a pivotal role. These blondes aren’t just picturesque stars at whom Hitch directed our gaze. These blondes are beautiful and eye-catching, sure, but they also project the qualities of independence, poise, range, determination and, most significant, mystery.

It’s that last quality which led to the related label “icy blonde” in reference to Hitchcock’s female protagonists. Hitchcock’s leading ladies complement their classic 1950s/1960s beauty and elegance with an added curiosity that often drives the film, creating tension and contradiction. Hitchcock blondes are the “Bond girls” of Hitchcockian cinema, each radiating with beauty while servicing her own mysterious agenda. This mysterious secret world beneath her surface pulls the audience deeper into Hitchcock’s universe of suspense.

The Hitchcock blonde represents a restructuring of the submissive, domestic female popular image of the time. While she fits the physical appearance of the classic model, she operates as a modern woman with a simmering sexuality and emotional complexity hidden beneath a clean wardrobe, aloof perfection and hairspray. The blondness of her mane only amplifies her duality: an iciness stored within the buttery innocence of flawless style. Her sex appeal is indirect; she is a cool exterior with an inner fire. 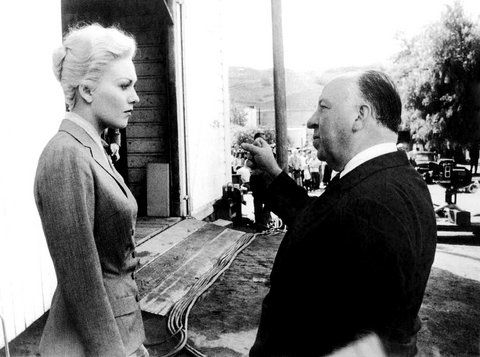 The Master of Suspense said he had a preference for blondes because they are less suspicious than brunettes. When a blonde does something deceitful or unexpected, it’s a greater shock than when a dark-haired girl does the same. He also said they simply photograph better in black and white, and that blondes made for better victims and better symbols of heroism. According to Tippi Hedren, one of Hitchcock’s favorite icy blondes, those were all excuses covering for someone who was a sexual predator, a man with a “very weird attitude towards women,” whose fantasy eventually made way into his real life. She considered his behavior towards his leading ladies emotionally devastating, textbook harassment. These comments suggest his preference for blondes could have been less cinematic taste and more the consequence of unresolved childhood issues and sexual inadequacies. According to Laura Mulvey in her 1975 essay “Visual Pleasure and Narrative Cinema”, Hitchcock’s films perfectly illustrate Sigmund Freud’s analysis of the male unconscious and the symbolic threat of castration primarily evoked by the female sex. But the British Film institute posits there is more to it, writing, “Mulvey’s focus on the misogyny of his films cannot entirely sum up the specificity of his women, their unique truthfulness, their depth and emotional potency, the visual alchemy they create. The BFI retrospective invites a reinvestigation of the links that bind Hitchcock’s attitudes to more intricate questions of truth, the richness of his cinematic worlds and the pivotal role of the women at the heart of such intense viewing experiences. While Hitchcock’s narratives and his remarkable aesthetic style have indelibly shaped cinematic convention, his legacy is most interestingly felt in the work of contemporary directors whose films offer dramatically different explorations of female sexuality and voyeurism.”

“We’re after the drawing-room type,” Hitchcock told Francois Truffaut. “An English girl, looking like a schoolteacher, is apt to get into a cab with you and, to your surprise, she’ll probably pull a man’s pants open.”

Despite their exterior perfection, Hitchcock’s women broke stereotypes of the time. Grace Kelly’s Lisa Fremont in Rear Window (1954) is the film’s masculine figure as Jimmy Stewart’s Jeff is stuck in a wheelchair. The way Lisa talks to Jeff is not with submissiveness but with a subtle passion and fire that never bluntly expresses her full intentions. Her character also naturally ilicits a sense of contempt from the viewer. As noted by Thomas Leitch in his book A Companion to Alfred Hitchcock, “Both dependency and independence in women inspire hatred… it places the woman in a double bind from which she is often unable to extricate herself. For Kelly’s characters, the double bind always involves a latent hostility to the very graphic qualities Hitchcock prizes in the actress. Kelly’s perfection in Rear Window is, in itself, enough to visit male anger upon her.”

A number of Hitchcock’s blondes do become victims, but his girls are far from helpless. Everyone remembers Janet Leigh’s unprecedented murder halfway through Psycho (1960), but it’s easier to forget she was only staying at Bates Motel because she stole a stack of cash from her employer and skipped town. A victim? Certainly — but not one without her own status of a shady Hitchcockian femme fatale. Still, the way that she is cut down halfway through the picture is in check with Hitchcock’s evolving tendency to violate women in his later-career pictures.

Hitchcock’s attitude darkened after a series of leading-lady career moves which he took as personal betrayals. Grace Kelly quit acting to become a princess, marrying Rainier of Monaco. Vera Miles had a child instead of starring in Vertigo (1958), which Hitch intended as her breakout performance. He retaliated against his actresses by controlling more aspects of their lives, culminating in his devastating effects on Hedren. It’s storied that he once sent her daughter, Melanie Griffith, a Hedren-shaped doll in a small coffin-like box as a gift. The two had a massive falling out, and his pictures were never the same again. The Birds (1963) is typically considered his last “great” picture.

Still, whatever the psychological basis of Hitchcock’s peculiar attitudes, his icy blondes have contributed to the lasting impact of many classic films. So often in Hitchcock, the trademark suspense hinges on the curious nature of the female lead, and she is a pivotal point of analysis as we continue to watch his pictures. The constant presence and recognizable traits of the Hitchcock Blondes open them up to analysis as a trope that transcends any one character or actress. It is tempting to explain the blonde obsession through Hitchock’s personal issues alone. But the director also wanted this trope to be the illuminating spirit of his pictures, representing quiet sexuality, duplicitousness, superficial perfection and shocking disobedience. Embodying all these contradictory forces, the Hitchcock blonde endures as a revolutionary, mysterious force.