What film genre has the strongest influence on “The Hateful Eight”?

It is lost on none that Quentin Tarantino has always identified as a film buff, eager to reference a vast repertoire of film cinema history (mostly genre and B movies) in his films. The Hateful Eight (2015) appears at first as a relatively conventional, if post-classical, western (it is set in the West and features a vast gamut of the imagery attached to the genre, including guns, horses, a coach station, outlaws, cowboys, etc.), reminiscent of Sergio Corbucci’s The Great Silence (1969). However, it appears very quickly that, in its tone and violence, The Hateful Eight is closer to Death Proof (2007) than to Django Unchained (2012, inspired by the eponymous Corbucci 1966 classic). Indeed, The Hateful Eight may be said to be Tarantino’s film most readily identifiable as a horror film.

There are several indicators of this: the nightmarish scenario of death-trap and massacre in a secluded cabin takes place mostly at night, with a cinematography resorting repeatedly to low-key lighting, and the film features gore aplenty. Daisy Domergue’s character—her body progressively abused, defiled and covered in blood—becomes a fine late instantiation of the so-called “monstrous feminine.” The image of Daisy’s blood-soaked female body also offers a clear visual allusion to De Palma’s Carrie (1976). But the very first—and best—indicator of the horror genre here is the score by Ennio Morricone: first, we hear the ominous opening credits track, a brooding and martial theme led by a French horn, over a tortured sculpture of a crucified Christ against a desolate, wintry landscape. A few minutes later, those in the know will recognize older pieces by Morricone, drawn from two classic horror films: the deceptively romantic ballad “Regan’s Theme” from The Exorcist 2 (1977) over shots of horses pulling the carriage, followed by three tracks from the score to John Carpenter’s The Thing (1982) with evocative titles: “Eternity,” “Bestiality” and “Despair.” (“Eternity” and “Bestiality” are on The Thing‘s soundtrack album but remained unused in that film.) 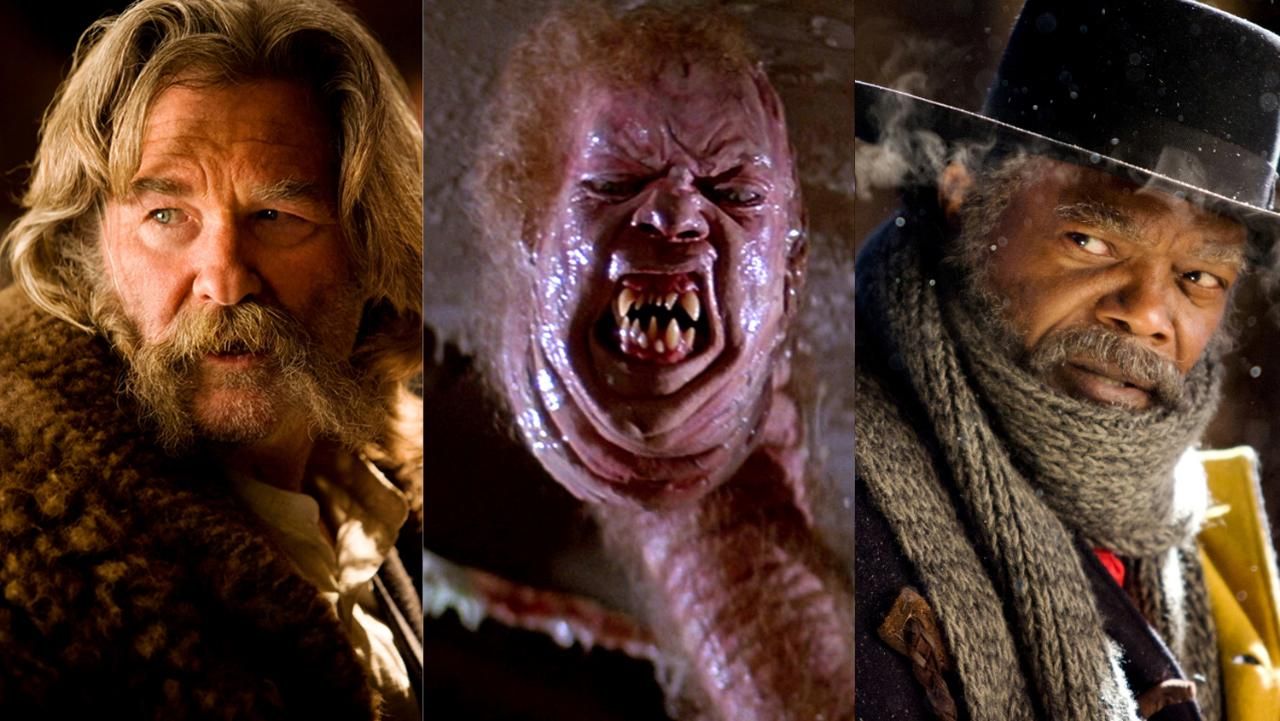 While Tarantino surely references dozens of other horror films and Westerns throughout The Hateful Eight—he even uses the song “Now you’re all alone,” by David Hess, who was the lead actor in Wes Craven’s The Last House on the Left (1972)—Carpenter’s masterpiece (also starring Kurt Russell) seems to be the central source text: the secluded, paranoid story in a space cut off from the outside world by the blizzard, wherein the intruder/assassin may have many faces and must be identified, is all over the film. The Hateful Eight also features at least one unambiguous literal (and gratuitous) reference to the 1982 classic: the rope connecting the haberdashery to the toilet, echoing the one connecting the various buildings of US Outpost 31 in The Thing. Of course, the genealogy and influence of Westerns on Carpenter himself should be pointed out here: first, let us remember that The Thing is a remake of the cold war sci-fi classic The Thing From Another World (1951), produced (and officiously directed, too) by Howard Hawks. Carpenter’s admiration for Hawks’ films, and particularly his westerns, goes back a long way: his second feature, Assault on Precinct 13 (1976), was a frustrated western, strongly influenced by Hawks’ Rio Bravo (1959), El Dorado (1966) and Rio Lobo (1970). Carpenter’s last decent film, the action-horror film Vampires (1998), shares more than one element with the western. So it makes a lot of sense that Tarantino should channel Carpenter in his attempt to celebrate the two most quintessentially American film genres.

Unfortunately, the thematic references to Carpenter in The Hateful Eight are drowned in visual cues seemingly drawn from a closer source to Tarantino: the nature of gore and violence in his eighth film has less to do with either The Thing or the splatter of Sam Peckinpah’s westerns (such as The Wild Bunch, 1969), and more with the torture porn films of fellow film-buff Eli Roth (a close friend of the director whose career is closely linked to Tarantino’s; Tarantino produced several of Roth’s films, including Hostel in 2005). Far from developing a subtle sense of dread, the film all too often lapses into the visually revolting, as in the blood vomiting by the poisoned John Ruth and O.B. Jackson; the chopping off of Ruth’s corpse’s hands by Daisy Domergue (in the script, her name is said to be pronounced “Dahmer-goo,” at once referencing both the infamous serial killer and a substance more often found in horror films than in Westerns); her gradual transformation into a crouching, dark-eyed, gore-doused figure of feminine abjection (very much à la Regan, late in her possession by the devil, in 1973’s The Exorcist) and her cruel hanging, lynch-mob style, at the film’s end.

It is all deeply unpleasant. While the film is not without humor and most of its cruelty is meant to be taken with more than a pinch of salt, the violence against women is particularly indulgent and in very poor taste. Here it should be noted in passing that the filmmaker seems to have shifted from his earlier female foot fetish to the female murder by strangulation fantasy (we got a synthesis of both in the infamous and equally disturbing demise of Bridget von Hammersmarck in 2009’s Inglourious Basterds). 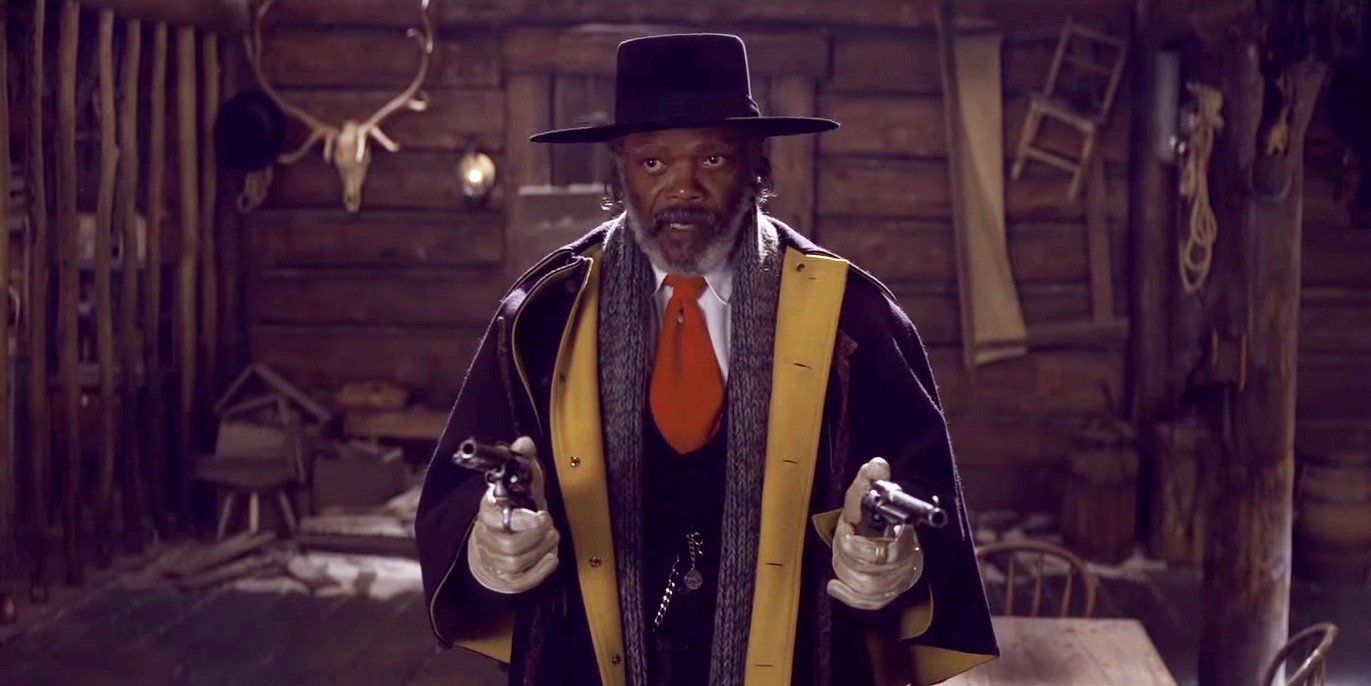 Perhaps the biggest problem is that, in being a horror film and Western in equal parts, The Hateful Eight gets its political message all mixed up between a pseudo-progressive critique, anarchist musings and libertarianism. The film simply fails to articulate productively the frontier/foundational myth of America that the Western usually tells (based on lawless violence but also male solidarity), while this story is muddled by the fear of death, survival instinct, the inevitable distrust toward the other and the critique of normativity that are all staples of horror cinema. These two ideological subtexts end up short-circuiting one another: as a result, we are not quite certain what to make of the film’s discourse about racial tension, misogyny, or violence.

Instead of exploring the tension and paranoia that made Carpenter’s remake of Howard Hawks’ Cold War alien invader film so memorable, or the frontier myth of the Western that remains so relevant to American society, The Hateful Eight indulges instead in grotesque violence and gore, culminating in a scene of two dying men (a black man-hating Southerner and a white man-hating African American) hanging a half-dead woman and laughing at the ungodly sight. If this surely undermines the masculine myth of the western, the film doesn’t seem so certain about the object it ultimately critiques.