In “The Lobster,” how does Yorgos Lanthimos demonstrate the theme of emotional detachment?

Quick Answer: In his darkly funny film The Lobster, Yorgos Lanthimos injects the setting with a sort of loneliness and emotional detachment that borders on robotic. He uses a number of tools to achieve this, including near-lifeless dialogue and positioning his characters slightly out of frame. In a film where characters must face shallow romance or doomed transformation into an animal, the lack of feeling and caring for one another as is depicted in the use of the camera shots, the performance of the actors, and the elements of the screenplay show that the regression toward the non-human, basic animalistic emotional state has already taken place.

If you had doubts about The Lobster’s (2016) pervading theme of emotional detachment, you only need watch the opening scene. The camera placement and action immediately set the tone for the remainder of the film. In the scene, director Yorgos Lanthimos presents a shot of a woman (Jacqueline Abrahams)—who is, significantly, alone—driving in a light rain storm. She stops the car and goes out into a field where two small donkeys are grazing. However, the audience doesn’t follow her into the field; the camera remains in the car. We see the action from a distance, thus removing us, uninvolving us, from what is to follow. The intermittent wipers seem to mirror the blinking of eyes, associating a person with a machine and anticipating the film’s dehumanizing universe. The woman then shoots one of the donkeys. At this point we don’t know what to make of this violence.

As the events of the film unfold, the audience is left to digest the implications of the opening scene. We learn that the universe of the film splits society between either enforced companionship or solitude. Those who don’t find a partner are transformed into the animal of their choosing. The solitary woman is unable to tolerate the animal couple—either because of their sheer coupledom or because she had previously known one of the donkeys when it was still human—and must remove one of the creatures. She thus leaves the other one, like herself, to go it alone. 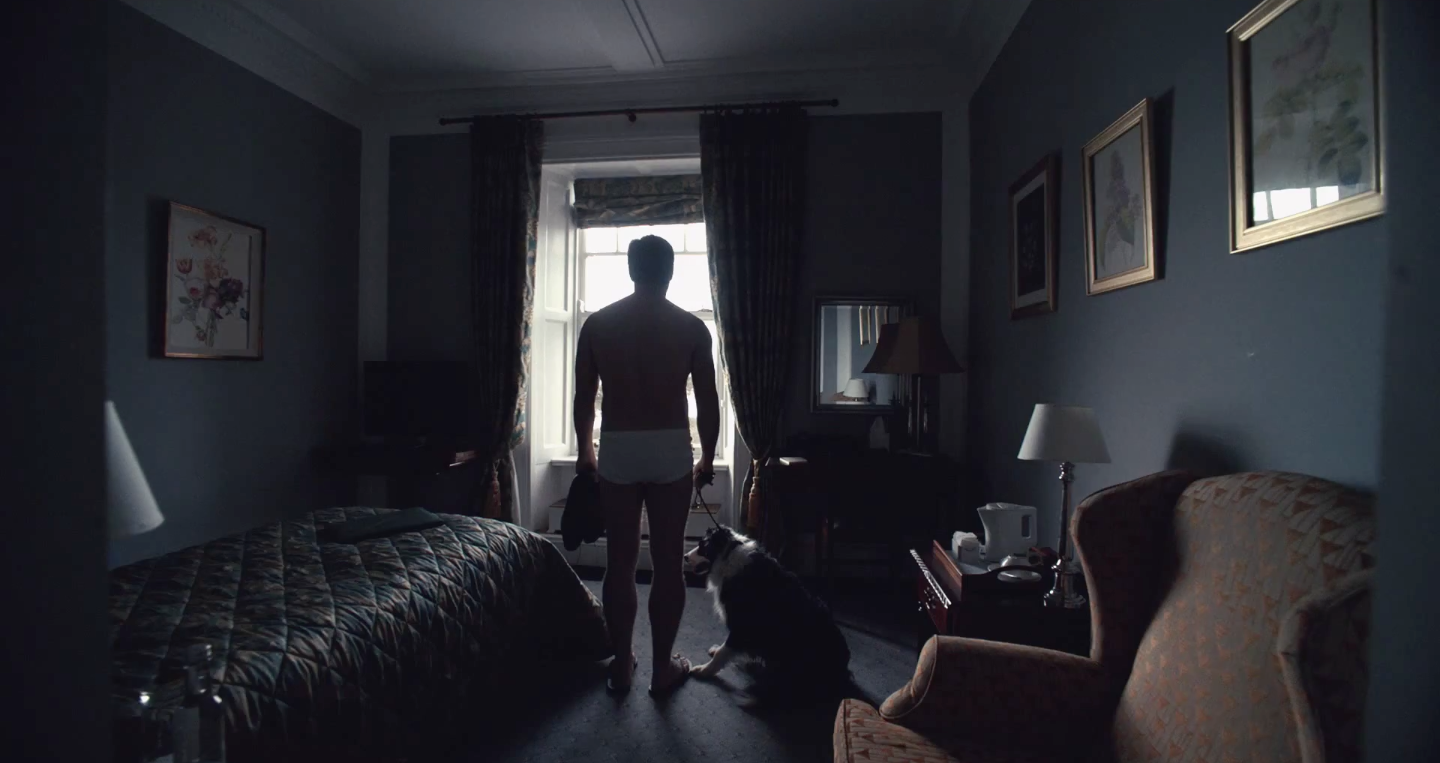 Colin Farrell as David with his brother, a dog

The introduction of the film’s major players is equally detached. Most of the characters aren’t indicated by their names, but rather by superficial epithets like Nosebleed Woman and Biscuit Woman. This distancing effect inhibits the characters’ ability to emotionally bond with others unless they happen to share the same defining quality. The film is narrated by once such character: The Shortsighted Woman (Rachel Weisz). However, we don’t learn her identity until halfway through the film, preventing the audience to connect with her character. The narration, as well as the entirety of the film’s dialogue, is delivered in a deadpan monotone. This decidedly inexpressive mode of communication suggests that people have devolved into unemotional robots.

Lanthimos’ direction further emphasizes his characters’ inhuman presence. There are several scenes where characters are not seen entirely or their faces are out of sight, almost as if they are not fully realized humans. For example, when David (Colin Farrell) checks into the hotel where he must find a mate, he enters a room where several people are shot from the waist down. Another example is the first scene in which we meet David. His face is turned at an angle away from the camera, again fostering a sense of detachment, as he talks to his off-screen wife about her infidelity. 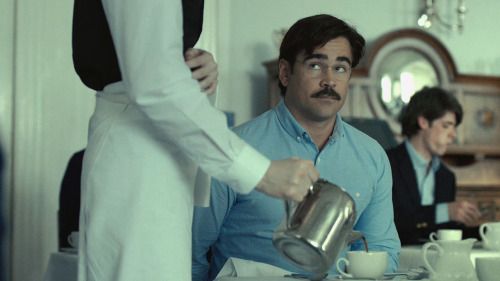 The script consistently uses non-emotional, physical characteristics to show how these people define themselves. The aforementioned epithets often reduce people to a single physical quality, such as a lisp or limp, to show how the depth of human personality has shrunk to a shallow version of its prior self. Instead of discussing what has gone wrong substantively with his marriage, David reduces the problem to a superficial one. He asks if the “other man” wears glasses or contact lenses, as if this one minor physical aspect is the only thing that can hold the couple together. He feels the same way about how visual problems are the only element that connects him to The Shortsighted Woman. One woman at the hotel chooses to distinguish herself by her long blonde hair; she sees that part of herself as the most important aspect of a person. It is fitting that she becomes a horse with a flowing mane. Like Bottom in A Midsummer Night’s Dream, who is an ass even before he becomes one, or Gregor Samsa in Metamorphosis, who is a bug before he actually transforms into one, this woman has morphed into her basic animal nature even before the actual event takes place. 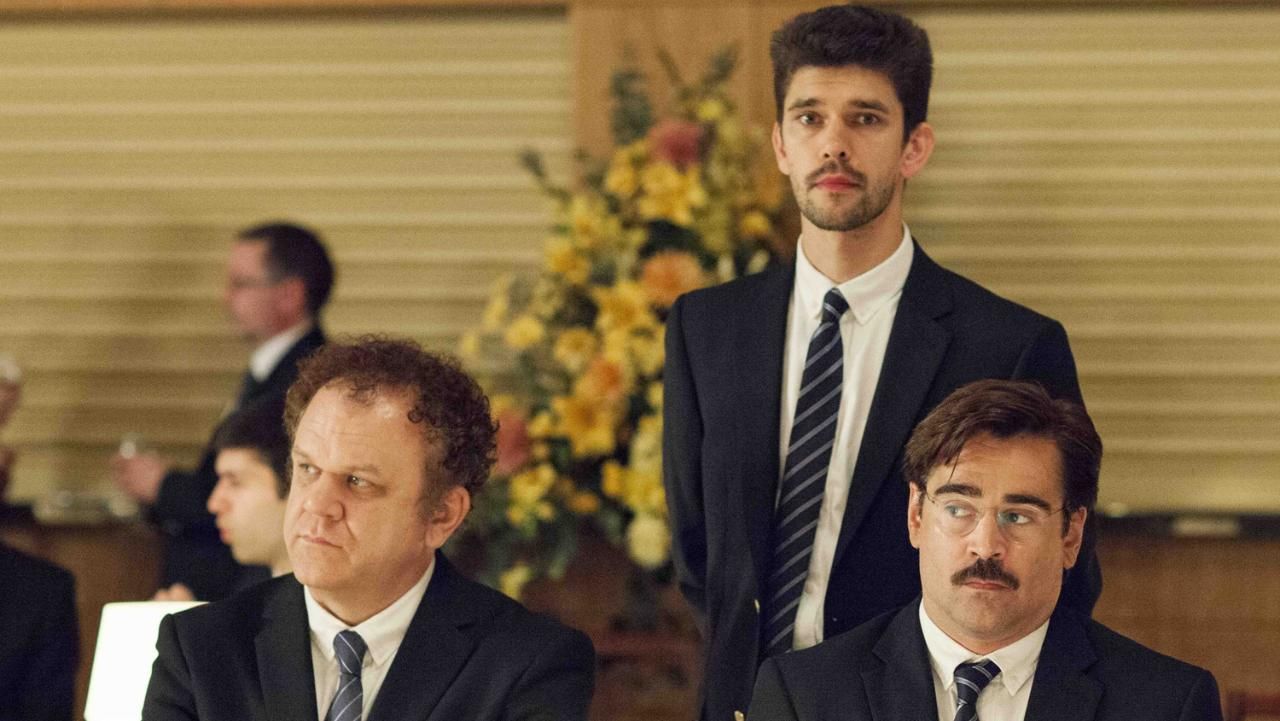 Even though the hotel is supposed to function as a site for people to find romantic partners, Lanthimos injects the setting with loneliness and emotional detachment that borders on robotic. Though these characters face either shallow romance or doomed transformation, it seems that the hope of their becoming more human has already been lost. The lack of feeling and caring for one another as is depicted in the use of the camera shots, the performance of the actors, and the elements of the screenplay show that the regression toward the non-human, basic animalistic emotional state has already taken place.