How much of “Nathan for You” is real? Is anything scripted?

Quick Answer: Docu-reality comedy series Nathan For You follows Nathan Fielder as he gives outrageous advice to small business owners and watches the outlandish consequences. The humorous results lead many viewers to wonder if some of the featured business owners or other people onscreen are actors in scripted scenes. Although the crew plans for certain situations ahead of time and Fielder plays an exaggerated version of himself, the reactions of the storeowners and customers are evidently genuine.

In Nathan For You (2013- ), comedian/businessman Nathan Fielder “helps” small businesses through elaborate, counterintuive strategies that most of us would just call “bad advice.” Whether it’s using parody law to create “Dumb Starbucks” or inventing a Holocaust awareness-themed clothing brand, Nathan comes up with the kind of idea it’s hard to believe any storeowner would willingly implement. But no matter how absurd the scenarios and ensuing reactions are, all evidence suggests that the storeowners and customers are genuine and unscripted. 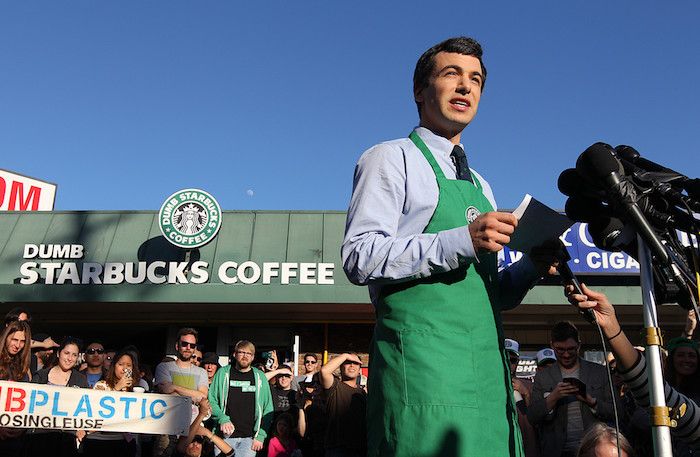 Before Nathan goes to the businesses for consultations, the show’s writers prepare a script and outline for both Nathan’s plans and possible reactions. In an interview with Splitsider, Nathan Fielder said, “Before we go in, I have a plan of what I’m going to say, and I have a plan for where we wanna go with it. But because we’re dealing with real businesses and real people, it often goes in an unpredictable direction. Which is really fun, but things can go wrong very easily. We definitely don’t prep anyone to what’s going to happen. We just go in and see what happens and hit the tone right.”

In the show, Nathan Fielder plays an exaggerated version of himself. This “Nathan” character was first used in the Canadian comedy series This Hour Has 22 Minutes (1993- ). Back in 2007, Nathan Fielder had a segment titled “Nathan On Your Side” where he would visit businesses and interview the owners in an awkward and monotone manner. These segments later served as inspiration for the more fleshed-out Comedy Central show Nathan For You.

Although Nathan Fielder plays a character, Nathan For You works to ensure that storeowners and customers are not aware of this fact. The crew of Nathan For You screens the owners through a casting process, vetting them to check that they don’t know the show is a comedy. In a Reddit AMA, Nathan Fielder said, “Often in the casting process we’ll encounter business owners that have lots of specific questions about the show and exactly what we’re planning to do with them. Because going into a shoot we don’t want participants knowing any of that or that it’s a comedy show (as this would take away from the acting naturally), we usually end up avoiding these more controlling/protective personality types as the chances they’re going to get very upset by an experience they aren’t prepared for is much higher. And the goal is never to get people upset.”

According to Fielder and the makers of Nathan for You, the only consistently scripted role is Nathan Fielder, and even he also constantly improvises due to the unpredictable nature of the series. The key to making the show “real,” in audience’s eyes, is that the business owners and others featured on the show aren’t “in on the joke.” And it appears that they aren’t. Some participants from Nathan For You have related that the series disguised itself and hid that it aired on the network Comedy Central. Jasmine, the woman who goes on a date with “Corey” (Nathan in a mask) in the episode “The Hero,” told Reddit that the series pretended to be a MTV dating show, and she heard of the opportunity through her casting agent. She admitted that she didn’t even know that she was on Nathan For You until the episode aired on television.

In the episode, Nathan claims he told Jasmine the cameras are following him because of his tightrope-walking plans, not for a dating show. The slight discrepancy suggests that, while the show hides its true nature from participants, Nathan (and his character “Nathan”) may be telling participants one thing and his audience another.

Jasmine’s comments also revealed that the participants can feel embarassment when they realize they’ve been misled in front of a large audience. “I felt pretty stupid and quite embarrassed when I realized what the show actually was when it aired,” Jasmine wrote on Reddit. She said she was sad and disappointed to learn that the guy she’d supposedly been dating was not who he claimed. She added, though, that the appearance was a professional boost: “in the long run it’s been the most popular show I’ve been in so far, so I’m liking that aspect from a career point. I just hate that I have to cross ‘MTV’ off my filmography and put in ‘Comedy Central.’”

Co-creator Michael Koman told Splitsider that the show is sensitive to not making it feel the comedy is at the expense of people on the show. “We’re all people with consciences,” he said. “Everyone on the crew is very quick to say if something feels like it’s at a person’s expense. There’s an illusion when you’re looking at it on television that Nathan’s doing more to put somebody in an uncomfortable position, but there’s also the reality that they’re on the set of a television show and there’s cameras right there.” He said that, in the writing process, they throw out ideas that feel they put the person in too unfair a position.

Suspicions have arisen at times that Nathan For You employs actors in scripted scenarios, especially because fans have spotted actors on the show, such as Jonathan from the episode “Hot Dog Stand.” Jonathan was a background actor in shows such as Arrested Development (2003- ) and Shameless (2011- ). However, it is highly possible that his appearance in Nathan For You was unscripted due to the high number of actors living in the L.A. area, where the series is filmed. 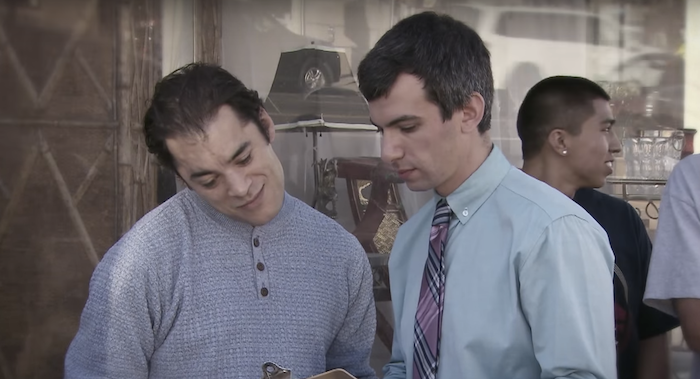 Jonathan (left) on an episode of Nathan for You 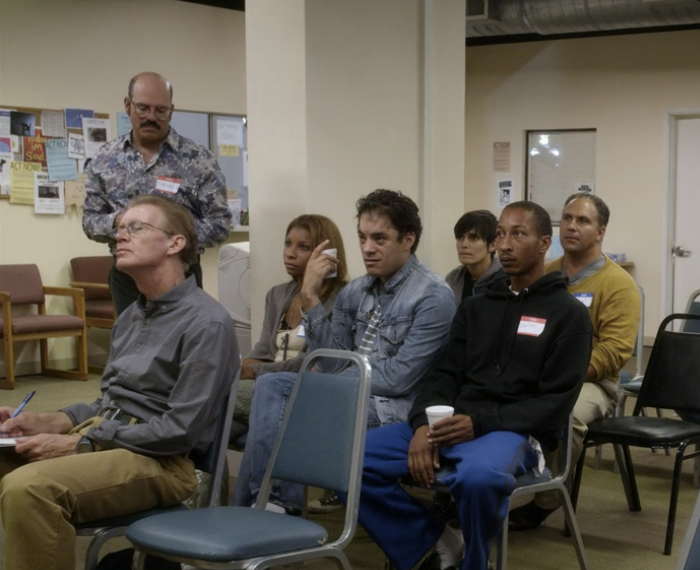 Jonathan (center) on an episode of Arrested Development

Sometimes reality can be stranger than fiction, and there are moments where even Nathan is taken by surprise by the business owners’ reactions. For example, in the “Gas Station” episode, when the owner talked about drinking his grandson’s urine, the whole crew of Nathan For You was caught off guard. In a Reddit AMA, Nathan said, “At first I thought he was kidding, and it took me asking a lot of questions before I realized he was for real. As crazy as it was though, I still felt the need to be respectful of this practice if it came from a culture or tradition I didn’t understand. Weird, conflicting emotions inside of me.”

Koman told Splitsider that the gas station urine moment was so coincidental and so hilarious that he wondered if it would seem fake. “It’s like, that’s so perfect, will people believe it happened on its own?” he said. “It was just too insane. It was so out of nowhere. Once we were editing, we realized how incredible it was. Because the people the night before were all talking about how comfortable they would be drinking urine. We thought to mention it to the gas station owner because maybe he would just have a small funny reaction that would be good near the ending. It was just the most amazing thing, that you meet what seem like the only three people on earth who will openly talk about drinking urine and you mention it to a fourth person and he would react that way. I still can’t believe it happened.”

Clip from the episode “Gas Station”

Koman also spoke about their surprise in the exorcism episode, “The Ghost Realtor,” when the realtor they selected revealed she’d a specific experience with ghosts. “When we choose to work with a person, the only criteria we have is that this person is, in this case, a realtor,” he said. “She seemed like she had a nice personality and would work well with Nathan. You hope that you work with people who, if you suggest an unusual idea, they’ll give it a chance. So that’s it. That’s all we know about her, and the rest is this kind of one in a million likelihood that she has incredibly personal ghost stories.”

Stories like this suggest that Nathan for You has enjoyed a fair share of comedy luck, but that (unless a large cover-up is going on) the reactions and behaviors on screen are real. Although Nathan For You does follow a basic script outlining possible scenarios that might happen, the participants’ frequently hilarious responses are indeed unscripted — but that doesn’t mean they happen by chance. The show’s extreme scenarios and Nathan’s character’s unusual behavior provoke real behaviors and responses that we don’t witness on a typical day. So while the show isn’t scripted in the sense of employing actors to perform sketch comedy, the ultimate result clearly comes from preparation and skill in the creators’ script for Nathan’s persona and the outline for how his plots might develop.

Since the series relies on the the participants being unaware of the show’s true nature and who Nathan Fielder is, it may become increasingly difficult for the series to keep its facade as the show’s profile continues to grow. Several episodes have already included stunts that attracted national attention: the popular parody cafe he called “Dumb Starbucks,” a fake viral video of a pig rescuing a goat, and a “Movement” urging people to offer free labor to a moving company for exercise, which led to a ghost-written book on Amazon’s best seller list.

For now, despite the show’s popularity and these nationally reported stunts, Fielder and Nathan For You apparently maintain enough obscurity to trick businesses and remains one of the funniest shows on television.