How is “The Jungle Book” different from the 1967 original feature?

Quick Answer: With 55 animated features under its belt, Disney hasn’t shied away from revisiting films from its repertoire. One such film is The Jungle Book (2016), a live-action interpretation of the 1967 classic. While its not the first remake of The Jungle Book, the latest iteration is the most ambitious in scope; it seems to have grasped the technological scale of contemporary cinema while also being faithful to both Rudyard Kipling’s original book and the 1967 animated film. What makes the 2016 film so successful is its balance of alterations and respect for nostalgia. The result is a film that feels fresh and exciting while simultanously pulling at the viewers’ heartstrings.

As of 2016, Disney (excluding its subsidiary Pixar films) has released an astounding 55 animated features. Considering that the vast majority became overwhelming successes, it’s unsurprising that Disney would want to revisit their classic, award-winning stories. Instead of competing with the original animated versions, though, Disney often offers live-action adaptations that simultaneously reinterpret and pay homage to their predecessors.

The Jungle Book (2016) is the sixth iteration of the 1967 animated film. It is not the first live-action remake of The Jungle Book, as one was released in 1994. The newest film, however, is much more ambitious in scope; it seems to have grasped the technological scale of contemporary cinema while also being faithful to both Rudyard Kipling’s original book and the 1967 animated film. What makes the 2016 film so successful is its balance of alterations and respect for nostalgia. As such, the film manages to develop its characters and craft a more serious tone while still maintaining the fantasy and musicality that make it such a beloved story.

The Jungle Book follows Mowgli (Neel Sethi), a man-cub who calls the jungle home and lives among its wild creatures. Some of these animals include Baloo (Bill Murray), Bagheera (Ben Kingsley), Kaa (Scarlett Johansson) and King Louie (Christopher Walken). Mowgli’s adventures truly begin when he learns that Shere Khan (Idris Elba), a man-eating tiger, has returned to the jungle. Despite this life-threatening circumstance, the 1967 animation is a child-friendly, goofy interpretation of Kipling’s novel. That is to say, it’s a true Disney creation. The film’s lightheartedness is amplified by the use of musical numbers, a straightforward plot that’s easy for youngsters to understand, and a cast of animals that act more silly than wild. It’s the treatment of the animals in particular that sets the updated Jungle Book apart from the 1967 animation. By choosing a live-action route over animation, beloved characters like Baloo and Bagheera are rendered in a much more realistic light. Though the filmmakers used CGI technology to create the chatty, anthropomorphized animals, their naturalistic representation helps to capture the essence of how animals truly live in the jungle. The mannerisms and features of the CGI creatures are more, for lack of a better word, animalistic. Growls, snarls, and exposed teeth lend a greater sense of danger than the cartoonish gestures of their predecessors. While the the 1967 counterparts are undoubtedly animal in their movements, they were desiged to have the physical features of both human and animals. Even minor details of these characters, such as Baloo’s toothy grins and raised eyebrows, make them identifiable as human within an animal’s body. In this respect, the live-action film has a more serious tone with a greater emphasis on survival.

The live-action film’s serious, more realistic tone isn’t just a product of the animals’ CGI appearance. The filmmakers also took care to explore the characters’ background and, in some cases, focus on their individual physicality. This is true of the protagonist, Mowgli, who was raised in the jungle by a pack of wolves. Though the pack is led by Akela (Giancarlo Esposito), Mowgli was raised primarily by Raksha (Lupita Nyong’o) along with her cubs. Mowgli finds a mother figure in Raksha, who treats him like her own kin. The updated film develops Raksha’s character more than the 1967 version. We see more of her mothering nature, granting audiences additional sympathy for Mowgli. In 1967, Mowgli comes across as innocent, but is primarily characterized by his goofiness. The 2016 Mowgli comes across as much more innocent and endangered as we follow him through the jungle and fear for his safety. This is enhanced further by the scratches on his body and his tousled appearance.

Furthermore, the 1967 animation didn’t reflect on Mowgli’s background, but the 2016 film does. We learn more about his family history, specifically from Kaa’s hypnosis. It is revealed that Mowgli’s father was mauled by Shere Khan while protecting him. We also learn the origins of Shere Khan’s fear of fire in the flashback, which is the source of his scarred face and white eye. Because of this new information, the relationship between Mowgli and Shere Khan in the 2016 film is more personal than in the 1967 film. Their rivalry culminates in the final scenes. The 2016 version has more action sequences and a “revenge” plot that establishes a true hero-villain showdown. Shere Khan is much more prominent and developed in 2016 as compared to 1967. Unlike the 1967 film, in which Shere Khan doesn’t appear until halfway through the movie, the live-action tiger is present at the onset of the film. Moreover, his character is fundamentally different in each film. The animated Shere Khan is represented as nearly undefeatable. He’s a more child-friendly villain whose threats are more humorous than terrifying. In his 2016 depiction, there is more than meets the eye. We learn that humans are responsible for Shere Khan’s fear of guns and fire. Instead of channeling his rage at his attackers, he has it out for all of mankind. Though he feels vengeful towards Mowgli, he also views the boy as a representation of his entire species.

Shere Khan isn’t the only animal who’s portrayed differently in the live-action film. Baloo may still be the same warm, loveable bear, but physiologically, the live-action bear is much truer to his species. Instead of walking upright next to his man-cub friend, the latest iteration of Baloo walks on all fours and has a much more lumbering presence. The same could be said of King Louie, whose hulking, apish features are enlarged, thus making him seem less goofy and more dangerous than in 1967. Perhaps the most significant alteration is Kaa’s character. In 1967, Sterling Holloway voiced the goofy yet alluring python. In the latest rendition, however, the snake is voiced by Scarlett Johansson. Choosing Scarlett Johansson specifically, an actress known for her smoky, sultry voice, was an interesting decision on the part of Disney, one that raises questions about gender roles in The Jungle Book. As a result of this major change, Kaa’s entire character changes. Without the foolish jocularity of her male forebear, Kaa becomes less goofy and more of a slippery, manipulative seductress.

Despite the clear changes that Disney made in the 2016 film, it still identifies itself as a faithful remake of the 1967 film. Though there are evident shifts in tone and style, the film works as a reboot because it relies on nostalgia to keep audiences hooked. The terminology used in the script and the musical numbers give the viewers a sense of satisfaction. The new Baloo and Mowgli recreate the Oscar-nominated song “Bare Necessities,” and Kaa sings “Trust In Me” to lure Mowgli into her hypnosis. These musical numbers maintain the film’s underlying fantastical quality. The songs, anthropomorphized characters and moments of nostalgia ensure that the film remains true to the beloved original. Furthermore, these fantastical elements rescue the otherwise dark film from straying into “jungle thriller” territory. 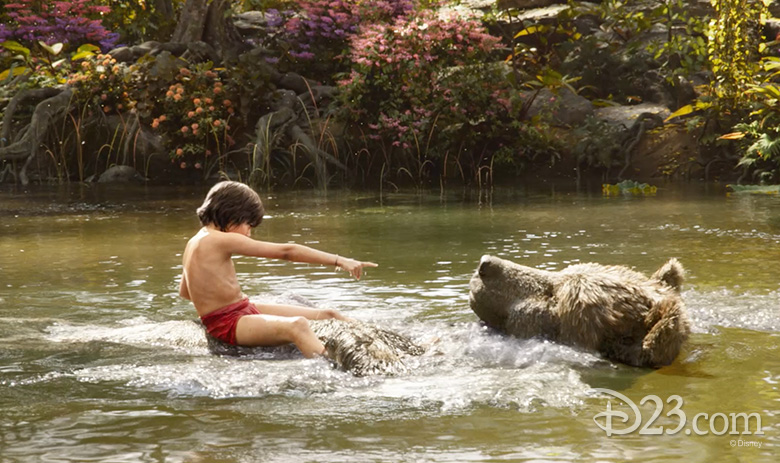 The live-action Jungle Book’s critical acclaim has proved that remakes today are not always a bad idea. Rather, they have the capacity to be thrilling, nostalgic love-letters to their predecessors. The Jungle Book is a story set in a world that has the structural scale of an adventure movie with the lovable characters of a children’s classic. Where 2016’s Jungle Book succeeded the most was its willingness to alter the tone and style of its source material while still being faithful to it. The result is a film that feels fresh and exciting while simultanously pulling at the viewers’ heartstrings. Furthermore, the reboot took the risk of changing the film’s ending. Rather than returning to the man-village as he did in 1967, Mowgli stays in the jungle with Raksha, Bagheera and Baloo– perhaps leaving further space for a probable sequel in a few years to come. With this change in mind and a style that is welcoming for contemporary audiences, The Jungle Book opens up the possibility for future adventures.