How is “Contempt” both a relationship drama and a scornful look at the filmmaking process?

Godard’s films are always significantly more than the sum of their parts. He is an intellectual who studies human nature through the art of film, is regularly autobiographical, and almost always crafts a seamless blend between seriousness and satire that perpetually keeps the viewer off-kilter. Contempt (1963) is his most commercially successful film, produced on a larger scale than any of his preceding pictures. The result is an astoundingly smooth product that is one part relationship drama, and another part examination of the filmmaking process. Of course, the two are not mutually exclusive.

Godard immediately invites us behind the curtain with the film’s opening shot. From deep in the distance, figures slowly strut towards the camera. Another camera is on them, rolling beside, inching closer to us on a set of dolly tracks. The actors approach, they leave the frame, and the dolly camera turns on us, the audience, capturing our gaze in its wide CinemaScope lens. The fourth wall is broken, and Godard is speaking directly to the viewer. It is through this act that we are instructed to remember everything we are about to witness is phony, yet is an imitation of life.

Calling attention to the act of filmmaking doesn’t stop there—we see it time and again throughout the picture, as Godard toys with the width of CinemaScope through noticeably forced back-and-forth shots that stand as reminders we are witnessing a film. However, when he does not appear to be mocking the communication of his own medium, CinemaScope also allowed Godard to fill the picture with images of a rich and textured world.

As with many of his films, Contempt is a stew of issues and thoughts that challenged his intellect during the time of production. As Carleton College writes, “Using his perception of a faltering industry, and wedding it to intimate observation of his own personal relationships, Godard came up with the most orthodox film he’s ever made. Not only is it almost ‘normal’ storytelling, it’s the clearest window into the tradition of Godard himself. He’s a director who doesn’t just make milestones—he makes milestones by referencing the world of film around him.”

To that end, we witness a picture with pop culture references like playwright Paul Javal’s (Michel Piccoli) Dean Martin hat (which he almost never takes off), to Camille (Brigitte Bardot) donning a wig that looks like Anna Karina, Gardot’s real wife at the time (with whom he was struggling). Characters speak of Homer, film producer Jerry Prokosch (Jack Palance) argues with Fritz Lang (as himself) over an adaptation of The Odyssey, conflicted between creating an intelligent art film or a dumbed-down Herculean costume epic. Fritz Lang’s presence is meta, as the characterized version of himself references his previous real-world films and his importance in European cinema. We see the occasional entrance of Roman art, and mockingly unromantic sexuality captured on film. It is all topped with intelligent broken dialogue that spans four languages and critiques the complexity of expressing one’s inner emotions, all with significant roles in the film’s composite oeuvre. 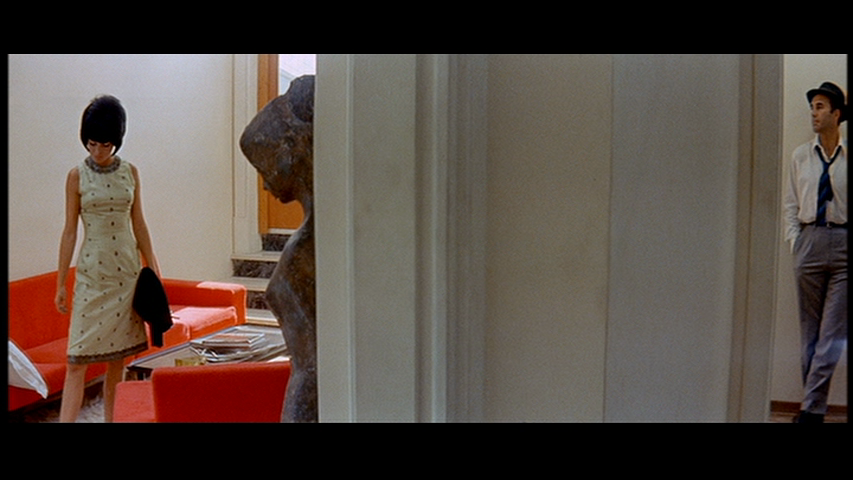 What all of this imagery and subtext and subtle connections aim to evoke is the idea that the inner emotional struggles of a human being dominate all other forces. Paul wants to think something of himself: he is a playwright, a charming and intelligent man, desirable to filmmakers, and has a wife that is the picture of female perfection. That should make him confident and secure. Instead, he condescends Camille and condescends himself, struggling with insecurity not just because of his wife’s physical beauty, but because she might make him realize he’s just an ordinary man.

Contrasting Paul is producer Prokosch, a man so buffoonishly confident that he says things like “I like Gods. I like them very much. I know exactly how they feel,” when he is not reading lines from an abnormally tiny book of quotations. Godard photographs Prokosch from low angles while he stands in warrior poses, endlessly projecting the character as an accidental image from the film he is financing. He is an alpha male who drives an Alpha Romeo—a red one at that, the color of passion and lust, and has his Romeo-like eyes set on Paul’s wife.

We get four acts for this journey through Godard’s mind: the first, an exploitative production appeasement that is little more than the camera groping the naked backside of Brigitte Bardot. Godard de-sexifies the scene by having Camille ask inane questions of Paul. “Do you like my elbows,” she inquires, while the camera caresses her rear. “And my knees? Which do you like more, my breasts or my nipples?” As if one makes sense without the other. What really happens here is Godard preys on our gaze to tell us how we’re supposed to physically respond to Camille—later, when she correctly suspects Paul is pandering her beauty to Prokosch, we’re on her side as things get messy.

The first act merely tells us about the characters, the conflicted film production, and Paul’s role. The CinemaScope camera takes advantage of its wide angles and produces vast scenic shots that render the character miniature. It also captures Camille’s growing contempt for Paul, though we don’t realize it yet.

The second act—Contempt’s most famous— takes us inside their flat, where Camille’s love for Paul has suddenly diminished. He isn’t sure why, and it’s not clear whether she is either. The camera follows them around for a half hour, arguing in broken phrases, making up, flirting, doing occasional housework, taking baths, and repeatedly re-igniting the sourness that constantly boils beneath the scene. Their argument is a riddle of human communication—evidence of how difficult it can be to pinpoint or express the deepest complexities of human emotion. It’s clear that Camille wants Paul to believe there is more to her than a perfect shape, yet through her mocking statements like “Believe it or not, I’m thinking. Does that surprise you?” and his eventual meltdown in act three where he questions why he ever married “a stupid 28 year-old typist,” it’s clear the condescension she has assumed all along is justified. Whether he intentionally spent the film quietly ushering her in Prokosch’s direction or not, he equally did nothing to prevent the producer’s advances. This stems from boredom, and Paul’s lack of agency or authority in his relationship with Camille, and the way he’s willing to sell out his talents for a paycheck to Prokosch, fosters her contempt. She frequently gives him the ability to make decisions for her and he never commits.

Godard’s introduction to Camille, the invitation of our gaze on her naked butt, is a trick. We are to identify with her on a physical level so the film can crush that image with a powerful message about superficiality. From that moment forward, we see a repressed woman who is beautiful on the outside but crumbling on the inside, her true self only revealed through fractured emotions and the empathy of the viewer.

Slant writes, “We never learn who Camille really is under her guise of the stunner—the parameters of this story purposefully don’t allow for that, but Bardot allows us to see the suppression of this character’s fragility, which hauntingly suggests the person we never know—and this evasion of identity imbues the third and final act with an overbearing sense of loss. We see Lang shooting portions of his Odyssey, which are represented by Godard with startling still images, but the emotional deflation of Camille and Paul’s long verbal battle royale trumps aesthetic pleasure. Contempt fully earns every possible interpretation of its bold title, as Godard commits the ultimate act of artistic bravery, refuting everything he’s embraced or known.”

Not far displaced is Godard’s image of filmmaking and Hollywood. Palance’s character is a rather blatant image of Hollywood ridiculousness, and though the movies look glossy and pretty on the outside, it often masks a gruesome interior. The film is an anomaly in Godard’s catalog. It was his first picture with a truly linear narrative. Paul was his first real “character” as far as traditional filmmaking was concerned. The contempt between man and woman on-screen mirrored the tumultuous relationship with his real-life wife, as well as the production of Contempt itself. The film’s relationship dissolve mirrors Godard’s fleeting image of classic Hollywood, which had transformed into a new era of artistic fragility. 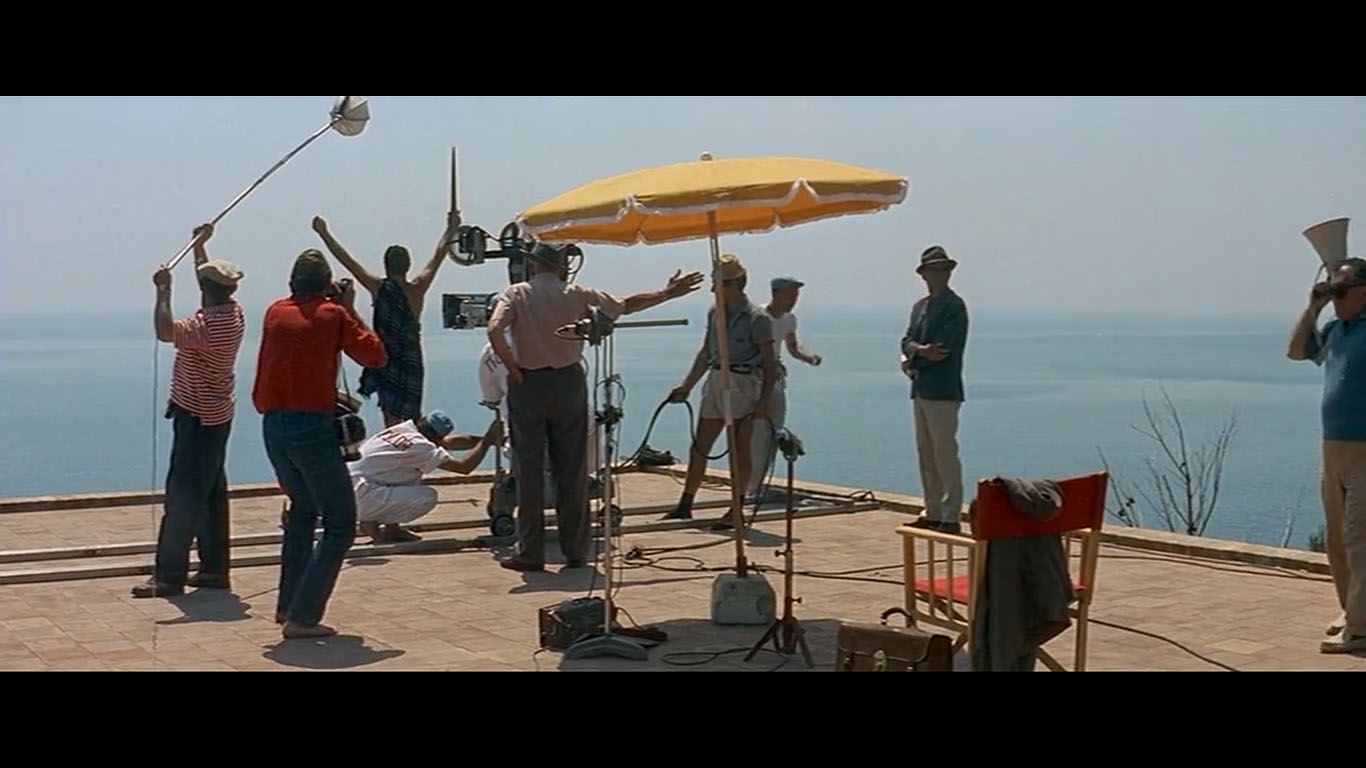 Martin Scorsese has called Contempt “a profound cinematic encounter with eternity, in which both the lost marriage and the cinema seem to dissolve,” and cites it as one of his top ten favorite films as well as a poignant look at the reality of filmmaking.

Using his observation of a crumbling industry and pairing with an examination of his personal relationships. Godard’s Contempt is a window into his own traditions. His films forever allude to the world around him. Contempt is a movie about the production of film as much as an autobiography of himself in the early ‘60s, told through a story about crumbling love amidst the ruins of cinema.