How has “The Hollars” director John Krasinski transitioned from actor to director?

In 2009, The Office (2005) star John Krasinski took his first seat in the director’s chair with Brief Interviews With Hideous Men. The arthouse/indie project, also written and produced by Krasinski, was based on the short story collection of the same name by David Foster Wallace and featured a wealth of recognizable faces. The film was received with mediocre response, being viewed more as a pretentious actor’s showcase than a fully-developed film, leaving something to be desired in most respects.

After a six-year gap, Krasinski returned for his second feature, The Hollars (2016), which premiered at Sundance to a warmer reception than his freshman outing. The film, again starring Krasinski along with Anna Kendrick, Margo Martindale, Mary Elizabeth Winstead, and Richard Jenkins (among many others), was penned by James C. Strouse and tells a story about the complexities, challenges, and wonders of family. Krasinski sees it as a fresh take on the age-old story of an adult facing one’s hometown and origins, combining dark, emotional dramatic material with lighthearted humor.

In a panel at Sundance, Krasinski was interviewed by pop writer Logan Hill about his approach towards directing. They discussed Krasinski’s manner of thinking about the directorial process (particularly when directing himself), the process for putting together The Hollars, and the influence other directors he’s worked with have had on his work.

As an actor in his own films, Krasinski says the simple mantra he repeats is “don’t screw up.” His job is to service the actors who have committed to his film. For The Hollars, those actors, he says, are exactly what made the film possible and who inspired the rest of the supporting cast to join the production.

“Casting Richard and Margo as my parents really put the whole movie in motion,” Krasinski told Hill. “When you have two people like that give unbelievably titanic performances, it’s easy to get other actors. People like that are just going to do a good job, and you want to be around it.” Krasinski is an outspoken fan of Margo Martindale (his first showbiz job ever was a Marshall’s commercial with Martindale). He also told Indiewire, “We got Margo, which means we got Richard, and then when you have those two people who are — as an actor, they’re like catnip. I think Anna signed on 30 seconds after knowing about Margo and Richard and the script. After that, the cast assembled really quickly.” 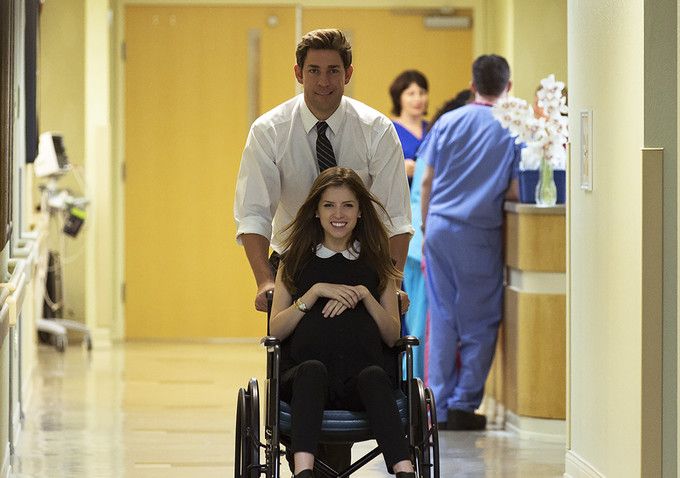 Krasinski’s character in The Hollars, as he puts it, facilitates all the other performances as a straight narrator-type. “It’s getting those star performances that everybody else gave and making sure I could link them with my character.”

Having recently come off of Michael Bay’s action film 13 Hours:The Secret Soldiers of Benghazi (2016), Hill asked Krasinski what lessons in filmmaking he learned from the controversial director. “Michael Bay is a singular director,” Krasinski started. “He directs unlike anyone else, and I think he knows it. That confidence level is a wild thing to be around. Two days before we shot we were doing a table read, and he said ‘I’ve already shot the movie in my head.’ ...The movie that’s on screen is what he had in his head. The way he shoots is so fascinating to watch.” He hopes to develop that level of directorial vision for his own work.

Ultimately, Krasinski says he just wants to “do good stories,” whether it’s as an actor, a director, or a one-line cameo part in a film nobody will see. The most important thing is telling a good story, and telling it in the most honest and appropriate way. He told Fox News, “I promised myself I wanted to do a movie that would be singular to my story telling, but if I did it, it would have to be something that I would have a take on that no one else would have. I was really proud of this job, but to me it was all about the story. I think Jim [Strouse] wrote a really realistic and a very honest take on what family is… He writes real honest people and real honest situations that you have to live through, and that’s what life is. Life isn’t simple and predictable; it’s actually very messy.”

As for directing, he continued, “I got into this business to be an actor; I was never somebody who thought ‘oh I’ll be a director’ because that’s a foregone conclusion. And I think that’s a mistake that people think that actors can just be directors, no problem. At the end of the day, it’s just about storytelling and I love telling stories.”

That perspective is what drives The Hollars and Krasinski’s maintenance of the actors within.