How does “Star Trek Beyond” measure up to our expectations of “Star Trek,” both the old and rebooted?

Quick Answer: The original series of the 1960s was a Star Trek of ideas. The Trek of today is beholden to its makers: it’s a Star Trek of nostalgia and summer blockbusters. In Star Trek Beyond, The Fast and the Furious franchise director Justin Lin balances and compromises between the blockbuster formula and the philosophical spirit of Trek. In a less self-referential return to some of the original themes, Lin also champions the power of family and focuses on his ensemble.

The Original Star Trek series (1966 - 1969) was a Star Trek of ideas. It featured a diverse (for its time) cast of characters attempting to live as equals in harmony, exploring the last frontier — not to combat or conquer strangers but to understand them and live amongst them, even. It was unashamedly optimistic, a chance for creator Gene Roddenberry to give social commentary on science, gender, religion, and politics while envisioning a progressive future that might inspire its viewers to believe the world could be more.

The Star Trek of today is one beholden to its makers: a Trek of nostalgia and summer blockbusters. Big studio films have trouble being truly ensemble and truly meditative — it’s just not in the nature of the action-driven, 2-hour format with its numerous formulaic requirements. Like it or not, Star Trek is now a tentpole action franchise.

But with the latest film, Star Trek Beyond (2016), series newcomer Justin Lin (he who revitalized The Fast and the Furious franchise) and co-writers Simon Pegg and Doug Jung seek a balance, and sometimes a compromise, between the blockbuster formula and the existential Star Trek TV origins. 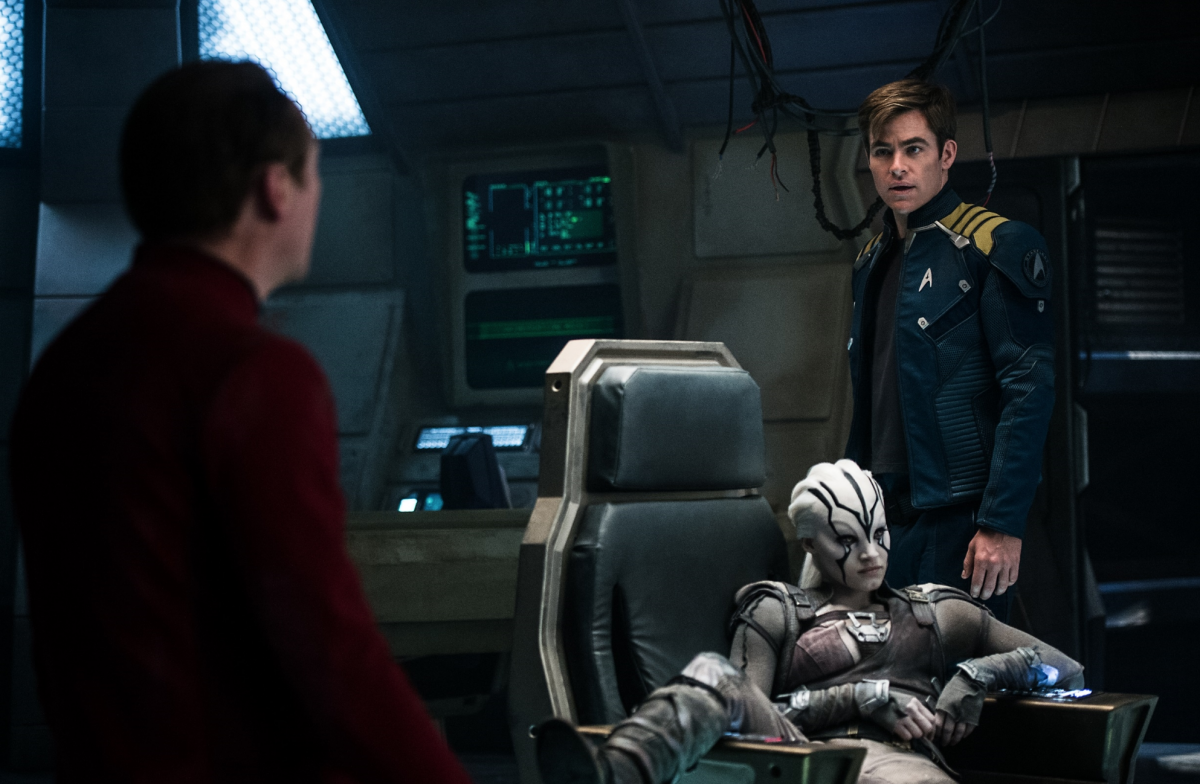 Captain James Kirk (Chris Pine) and co. have returned to the original concept of the last frontier — and the original genre of the Space Western — moving endlessly into a never-ending universe. Beyond attempts once again to be a Star Trek of discovery. Kirk even makes a reference to how life feels almost “episodic” now, one of the few nods to the original series (if it feels almost too on the nose). The movie can seem directionless at times, resembling a long version of an old episode more than a summer action film, but this trade-off feels necessary. While Beyond fulfills the action formula checklist, we don’t need a Khan redux or another terrorized Earth city to stay interested. This is three years into the Enterprise’s legendary five-year mission, and you almost wonder how eventful the first years were given the deep drifter’s malaise evident in Kirk. (While the film lacks time to explore every character’s motivations in depth with so large a cast, Kirk, Zachary Quinto’s Spock and John Cho’s Sulu look all-too ready to get off the Enterprise whenever port becomes an option.) If the first film was about getting the crew together and the second featured a conspiracy within, this film is the reboot franchise’s closest return to Star Trek’s introspective, philosophical roots, asking: is space still worth it? If so, why? 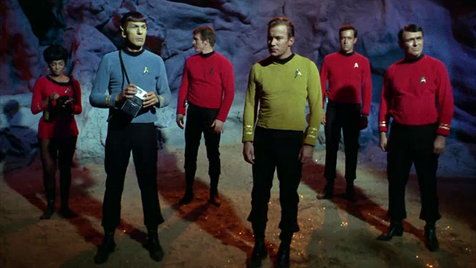 The answer lies in the crew’s familial bonds. Part of what drew viewers into Lin’s installments of The Fast and the Furious franchise was just how much its creators and cast, and by extension its characters, believe in the bonds of family. Lin tries to bring this sensibility to Star Trek. Pegg and Jung admirably try to mix up the predictable character pairings, to mixed success. Instead of the usual Spock-Uhura, Chekhov-Sulu, Kirk-everyone pairings, we see unusual scene partners — Kirk and Chekov (Anton Yelchin), Sulu and Uhura (Zoe Saldana), Spock and Bones (Karl Urban), Scotty (Simon Pegg) and series newcomer Jaylah (Sofia Boutella) — resulting in new energies for the characters. We still know nothing about Sulu and Chekhov, other than that one is the great John Cho and the other is excitable (we miss you, Anton Yelchin). But Jaylah is a lot of fun (if a bit hollow in characterization), and Spock and Bones spend most of the film bantering through space and nearly stealing the movie in the process. At the same time, this structure accidentally points out just how limited every character is: Scotty quips, Bones grumbles, Spock is slightly emotional, Uhura shouldn’t have to deal with these boys anymore, etc.

Zoe Saldana as Uhura in Star Trek Beyond (2016)

But if the film can’t spend enough time teaching us about all of its characters, it does sell us on the ensemble. Everything is about working together: working together to stay alive, to find each other, to suss out their villain, to get off this planet, to save the day. Too rarely do blockbusters capitalize on ensemble chemistry to win audiences, and this cast is clearly fond of each other. When they lose their ship on a planet unknown by enemies unknown, the Enterprise’s crew makes it work, barely considering the idea that they would have to survive alone because their natural instinct is always to find each other and work together. Again, this connection to ensemble harkens back to Star Trek’s idealistic origins and Roddenberry’s genuine belief in unity together. And while its diversity still leaves something to be desired, this film builds on Star Trek’s original progressive mission. Given how rare it is to see gay Asian men in film, even Sulu’s understated (and somehow overstated) relationship makes this film a step in the right direction.

All that in mind, this can’t just be a Star Trek of the past. It’s an action movie of today. Some comparisons to Guardians of the Galaxy (2014) aren’t unjustified — it’s a universe of colorful aliens (over 50 different species!) displaying surprisingly human tendencies and pop culture preferences. But while some of the film’s most intriguing character questions are dropped in favor of free-wheeling action, Lin has a blast imagining the kind of Star Trek he wants to play in, and have you ever seen a more colorful apocalypse? This is a film that asks you to be excited about possibility, even in the face of death. The need to explore new horizons — the different aliens, the saturated colors, the new planets, the retro ship — is what makes Beyond the most Star Trek of the reboot series yet. It doesn’t need to have another cold battle aboard grey-blue star ships. It can just fight on solid ground between multi-colored, ninja aliens.

Moreover, while Beyond may still not be making any bold, consistent statements about humanity, it also does not feel the need to be as self-referential and expositional as the first two reboot installments. No longer is this the franchise that rains Easter Eggs from the heavens. Lin understands that the movie doesn’t need to constantly reference Star Trek to feel like Star Trek. Instead, Beyond draws on the classic Trek thematic preoccupations, relying on subtle references without getting bogged down in over-clarifying. Legendary Leonard Nimoy only appears twice in image form, and his second appearance (especially poignant for reasons that will become clear on viewing) feels heavier than most of the rest of the film combined. This isn’t just thanks to Zachary Quinto’s affection for his real-life friend; it’s a stripped down moment of silence for every fan who loved the original crew. With Yelchin as well, the film makes no attempt to blatantly increase his role to honor his death (though the actor was talented enough to deserve far more screentime). But every scene in which he bounces his accent off anyone who will hear him becomes tinged with grief for those who loved him.

As much as fans want a blockbuster movie of ideas, Star Trek’s philosophical pursuits were always best served by television. Star Trek Beyond even seems to be teeing up next year’s TV series reboot headed by Bryan Fuller through moments like the “episodic” reference and its return to the self-contained, lower-stakes mission style — choices that prime us for the introspective, open-ended episode structure of TV. Perhaps Beyond’s balance of blockbuster meets exploration serves as an appropriate, moderate intro to classic Trek that will bring new audiences in for the ride. Given what we’ve seen, it’s a ride worth staying on.