How does Harley Quinn’s new look symbolize her toxic relationship with the Joker?

Quick Answer: Since Harley Quinn was created in 1992, fans have kept an unwavering eye on the clown car crash that is Quinn and the Joker’s dysfunctional relationship. Recently, the infamously abusive relationship has been carefully personified in Harley Quinn’s ensemble. A visual examination of Harley’s getup—From her “Property of the Joker” jacket to her devoted tattoos—reveals how her style symbolizes the toxic relationship she shares with the Joker.

Harley Quinn, formerly known as Harleen Quinzel, struts a new look in Suicide Squad (2016) that is clearly a fashionable departure from the red and black spandex in which her animated persona usually wreaks havoc. But despite the fact that Harley no longer dresses the part of a jester, she still does a good job at playing the fool when it comes to her beloved Joker. 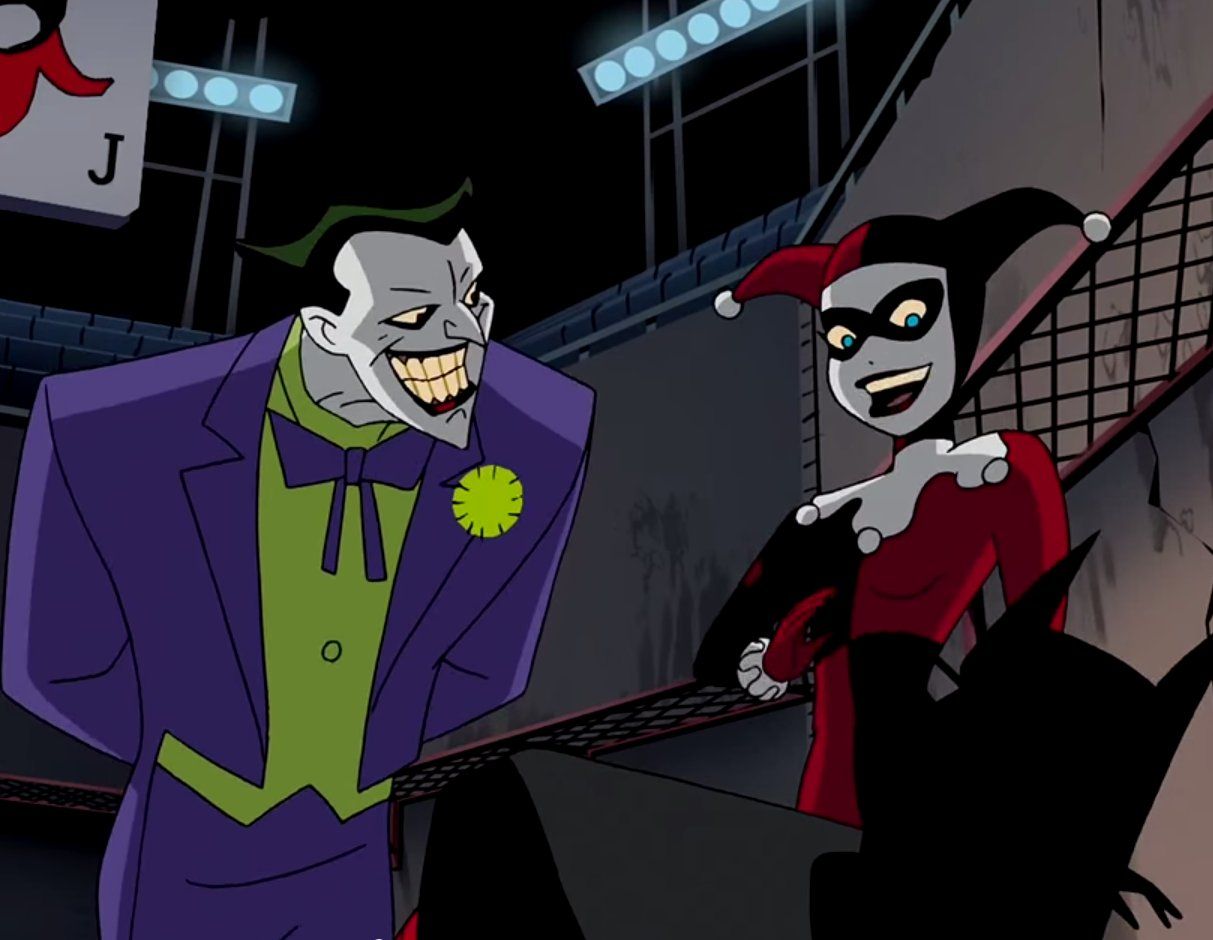 The Joker and Harley Quinn in Batman: The Animated Series

Mr. J sees his cute little psycho like a funhouse mirror; she is something fun to look at but not something to take seriously. To the clown prince, their relationship is just one big joke. Harley is nothing more than a pretty cog in his grand design that he can use and abuse to his liking.

Their love story is a clown car accident that people have been unable to avert their eyes from since Quinn’s creation in 1992. Fans have remained infatuated with the dysfunctional duo ever since. Evidently, everyone has a little Harley in them. To this day, fans ride the duo’s sick cycle of love like a merry-go-round. 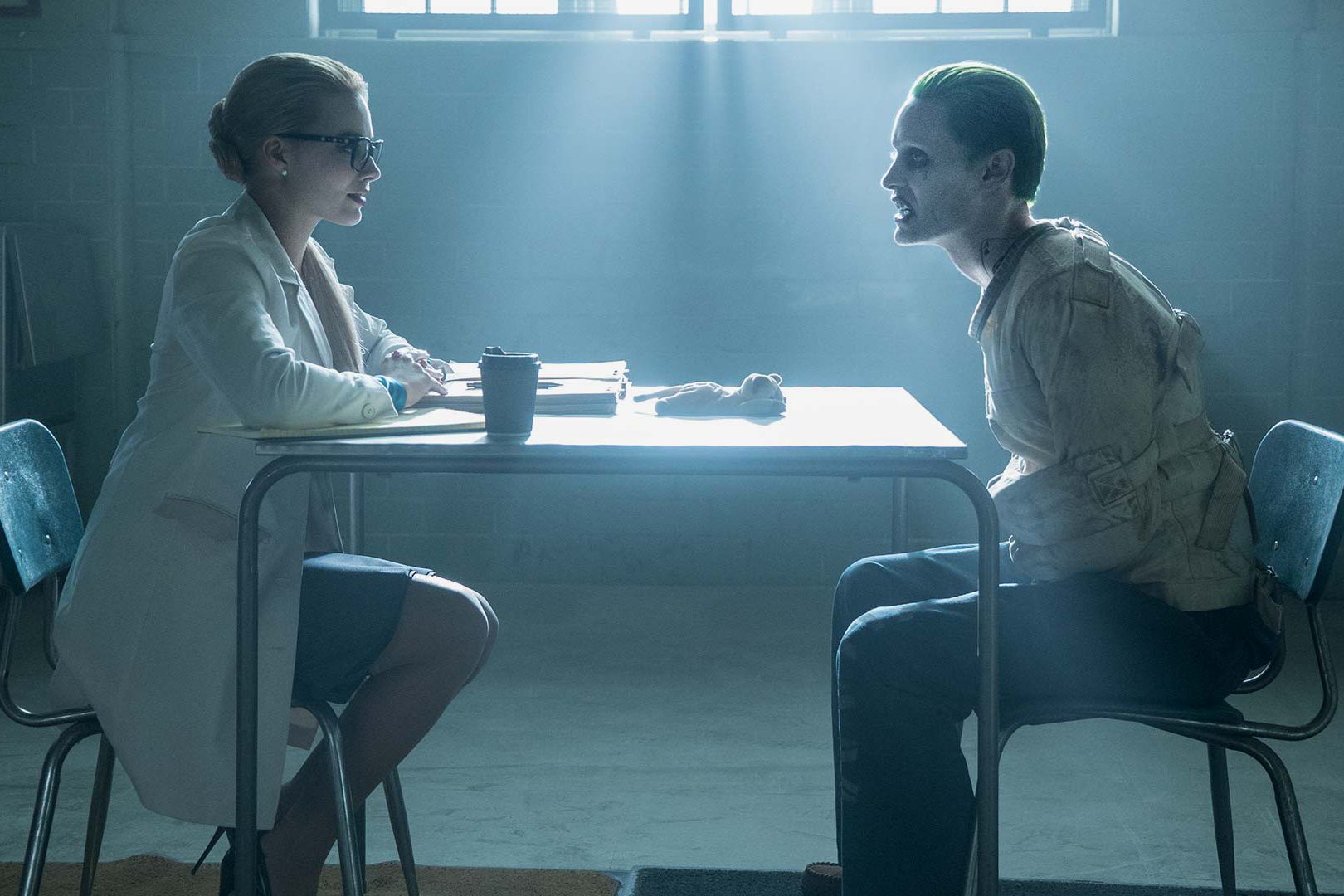 Recently, the infamously abusive relationship has been carefully personified in Harley Quinn’s ensemble. The clown princess is Team Joker from head to toe. A visual examination of Harley’s getup reveals how her style perfectly symbolizes the toxic relationship she shares with the Joker.

In the film, the evil mistress dons a choker that says “Puddin.” This is significant because it indicates that, much like the text on the back of her bomber jacket, she is “Property of the Joker.” The sense of ownership that the Joker has over Quinn is emphasized by her choker’s resemblance to a dog collar. Not only, then, is she the Joker’s property, but her accessory confirms his role as her “master” and she as the loyal dog. She is, quite literally, Joker’s “bitch.”

When she is not with the Joker, Quinn wears her “Property of the Joker” jacket. This article of clothing might as well be a giant wedding ring since the red and blue bomber lets people know she is taken. The jacket stays on until she is reunited with her man; once the pair is together again, the Joker’s actual presence replaces the jacket’s purpose. Her shirt has the same effect as her coat. The words “Daddy’s Lil Monster” written across her chest are just another way to say that her goods belong to her twisted beau. 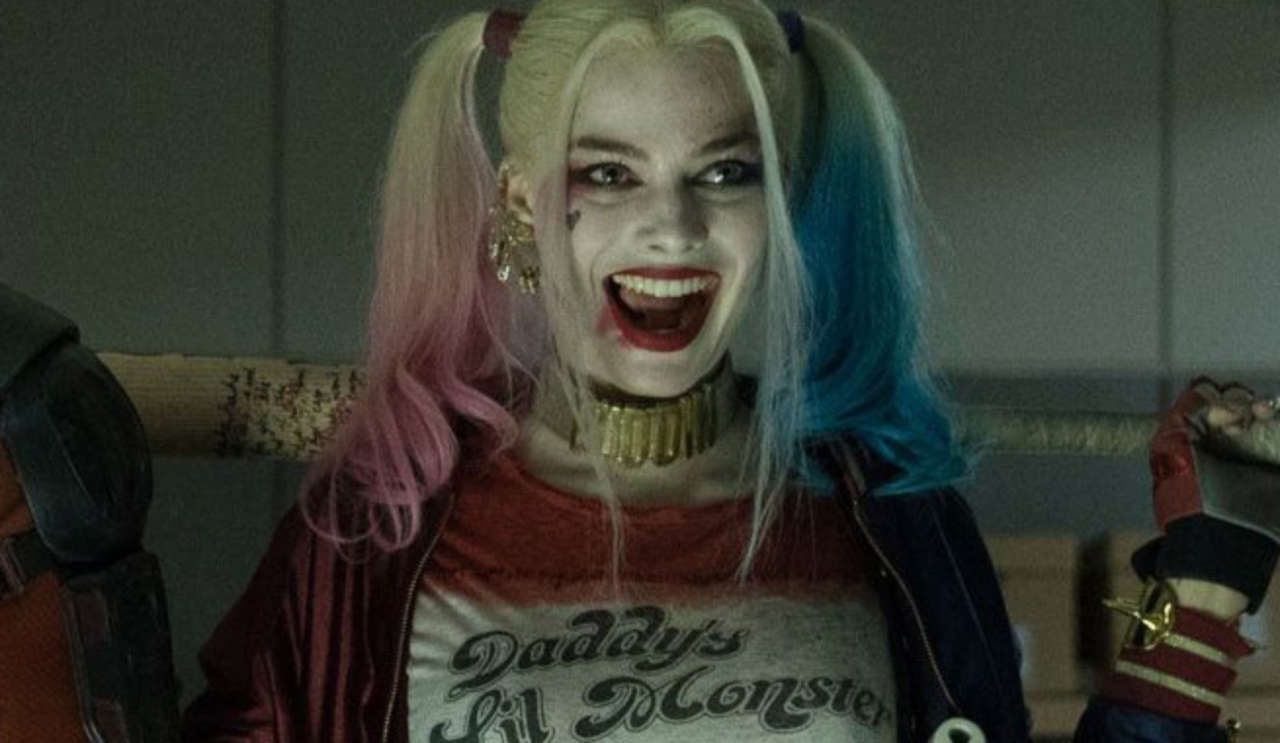 In terms of Quinn’s sequin shorts, the colors’ shimmering motion epitomizes the see-saw nature of the duo’s relationship; sometimes they’re up and sometimes they’re down. Even Harley’s gun is emblematic of the defective couple. The words “love” and “hate” are written in white on opposing sides of the weapon. The miniature firearm she wields is similarly representative of the crazed clowns’ relationship, since they use their love to destroy and kill.

Altogether, the pieces of Quinn’s skimpy getup come together to form a love-sick uniform. Her outfit makes it obvious that she is nothing more than the DC devil’s jack in the box: something he takes out when he wants to play and casts aside when he’s had enough.

One of Quinn’s most defining physical characteristics is her bouncing pigtails. Pigtails show that this super-villain still retains a certain child-like innocence to her. The same innocence can be seen when Quinn blows bubblegum in Suicide Squad and in Batman: The Animated Series (1992-1995). Harley’s hair has multiple colors to match her multiple personalities. Her hairstyle is a sexy stand-in for the more modest Jester cap she rocks in comic books. In Batman: The Animated Series, Mr. J pets her jester cap. The subtle taps on her head make her cap resemble floppy dog ears, again reinforcing the pair’s unhealthy pet/owner dynamic. 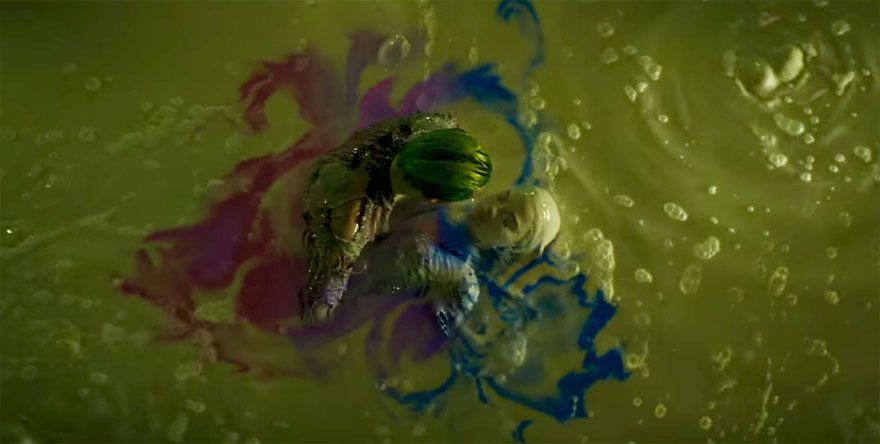 The Joker and Harley Quinn in a vat of toxic waste

The Joker also takes the term toxic relationship to another level when he has Harley plunge into a vat of deadly chemicals. As the Joker pulls her out of the green liquid, her hair and the acid turn red and blue. The two colors symbolize the bipolar nature of their relationship: a mix of love and hate, just like her aforementioned gun. Her skin is dyed alabaster to match the Joker. As a result, she looks like a modern-day Bride of Frankenstein, the perfect partner for her monstrous beau.

The ink on Harley marks her permanent obsession with the Joker. The tattoo heart on her face hints that Harley values love. This is clear during her fantasy about having a normal nuclear family with Mr. J. Unfortunately, her “puddin” tattoo more accurately depicts her ruthlessness and violence, suggesting that she would rather lead a life of reckless endangerment than play house. Moreover, we can view her tattoos more as brands than harmless tats; her love for the Joker is literally seared onto her body.

The words “Daddy’s Lil Monster” are not only found on her shirt, but are also tattooed to the left side of her chest. The tattoos location is no coincidence; the fact that the tat is right above her heart speaks to her devotion to the evil genius. 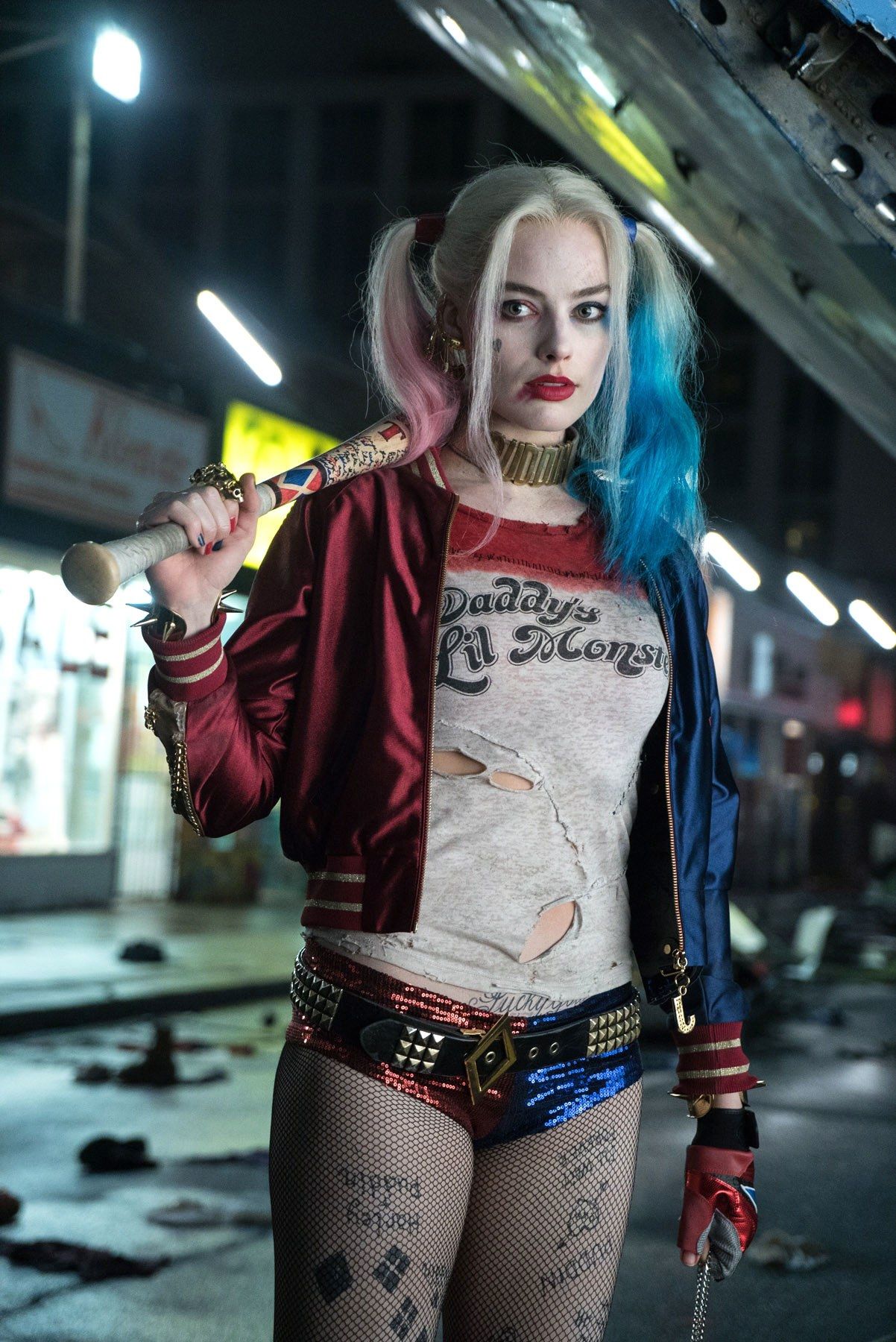 Harley Quinn with her upside down tattoos visible

The tattoos on Quinn’s thigh read “Harley + Puddin,” “Puddin,” and a heart with an arrow going through it that says “Mr. J.” The fact that these tattoos are upside down serve as evidence that Harley applied them herself.

The signature bundle of diamonds on her right arm and thigh display her connection to the Joker. The Joker’s forehead tattoo labels him as “damaged,” which links nicely with Harley’s “rotten” jaw tattoo. Their body art shows that as individuals they are both a little messed up but somehow mesh together. Though the pair’s love is dysfunctional and downright toxic, it’s appropriately twisted, jagged and addictive.