How does “BoJack Horseman” balance humor with sadness?

Quick Answer: When BoJack Horseman first premiered on Netflix two years ago, it seemed like it would be just another raunchy adult cartoon. Instead, it’s a strikingly honest depiction of depression and self-abuse. By cleverly using humor to explore the show’s tragic themes, BoJack Horseman is a funny and surprisingly relatable series about a misunderstood, alcoholic horse.

Judging by its premise of a washed-up actor (who also happens to be an anthropomorphic horse) trying to regain his celebrity status, I wasn’t sure what to expect when I first watched BoJack Horseman (2014 - 2020). The way Netflix promoted the show, it seemed like it was going to be just another raunchy adult cartoon. I, like many other skeptical viewers, was wrong.

BoJack Horseman does an incredible job of balancing its jokes and gags with an abundance of tragedy. The show does not hide the characters’ darkest moments; instead, it embraces them. We are left to helplessly watch the characters suffer the impending consequences of their poor life decisions.

The experience of watching BoJack Horseman is almost surreal. The moment you think things can’t get any worse, they do in the most spectacular and disturbing manner possible. But the show successfully rides the line between outrageous and relatable. The characters of BoJack are flawed and insecure at times, but aren’t we all? We can all empathize with Todd (Aaron Paul), who feels like he’s lost in his twenties, or Diane (Alison Brie), who’s unsure of her relationship with Mr. Peanutbutter (Paul F. Tompkins). Even in the bizarre land of BoJack Horseman‘s Hollywoo, the stories succeed in feeling honest and real.

In an interview with The Verge, show creator Raphael Bob-Waksberg said, “I think to me, I wanted to tell a [story] that I felt was honest, and I think a lot of shows that I see are not honest about sadness. I wanted to talk about it, and how hard it is to not be sad for some people. So I think the best way to do that was a wacky cartoon starring a talking horse.”

It’s easier to digest the self-destructive actions of BoJack (Will Arnett) when the show is set in an absurdist world where anthropomorphic animals and humans coexist. These few degrees of separation from our real-world keeps the tragedy detached enough that we can see it as harmless fiction. We’re not part of the tragedy; we’re merely observing it. No one is really getting hurt; they’re just cartoon characters.

Of course, tragedy is no stranger to comedy. Tragicomedy has been a genre for centuries. However, while most tragicomedies try to lighten the mood or reach a happy ending for its characters, the levity that BoJack provides seems to intensify the tragedy we just witnessed.

For example, at the end of the episode “Let’s Find Out,” BoJack wins $500,000 for charity but decides to risk it all for a double or nothing challenge. Since he wants to sabotage Mr. Peanutbutter’s show and get back at his fellow game show contestant Daniel Radcliffe (who commits the indecency of forgetting BoJack’s name), BoJack intentionally gets the answer wrong, which results in all of the money being dropped into a pit of fire before the scene abruptly cuts to credits. 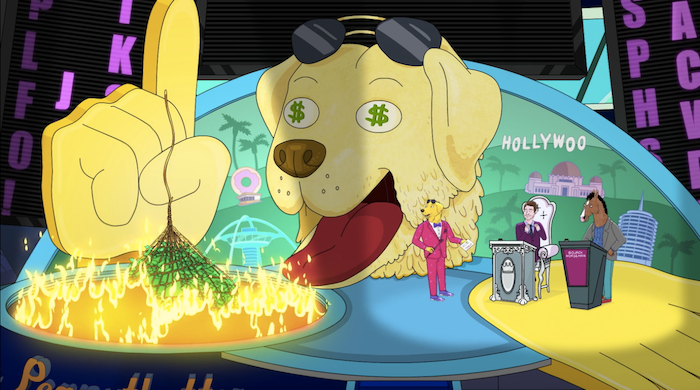 While dropping the money into a pit of fire is played up for laughs, the viewers are left with an uncomfortable sense of unease and astonishment. We know that BoJack isn’t exactly the picture of generosity or kindness, but did he really just burn half a million dollars for charity just to annoy his peers? Can he really be that petty? The answer, sadly, is yes. While this scene is obviously exaggerated to be funny, it doesn’t even compare with some of the more devastating scenes of the series, such as BoJack’s flashbacks to his abusive childhood and his extremely strained relationship with Charlotte (Olivia Wilde) after he almost slept with her daughter. These scenes are dead serious, terribly bleak and difficult to watch.

The brilliance of BoJack is that the show is inherently a drama with tragic and flawed characters, not a comedy. In the same Verge interview, Bob-Waksberg said, “[We’re] always interested in getting the truth. And we’re interested in story first and characters first—I guess we can’t be interested in both things first, but they’re kind of related—and comedy second…We’re not just making jokes so that we can make jokes. I’m more interested in what are the characters going through.”

The show never overtly ridicules BoJack’s depression or Herb Kazzaz’s cancer. That would be distasteful rather than funny. Instead, the show finds humor alongside the tragedy through clever wordplay, recurring gags and jokes relating to the show’s animal characters. 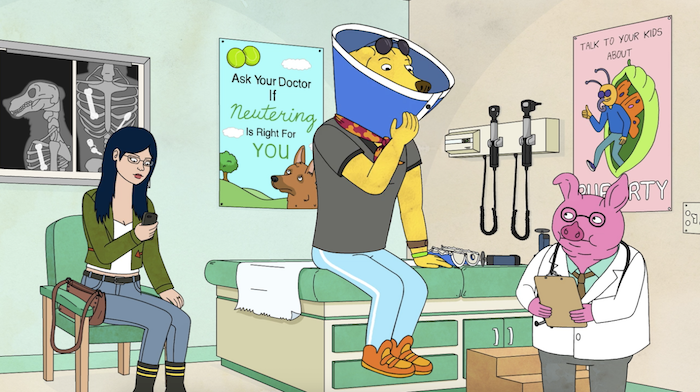 Mr. Peanutbutter wearing a cone collar meant for dogs (which he is) BoJack Horseman is brutal and unrelenting in its honesty and it accomplishes this by disguising the series as a comedy. We expect to laugh at the shenanigans a horse can get into in Hollywoo. No one ever expected to see such a stark tragedy of a group of characters suffering from self-abuse, depression and loss. BoJack Horseman is one of the few shows that can openly discuss tragedy with just enough levity to make the show tolerable and even enjoyable.