How do the “Game of Thrones” characters look on TV versus in the books?

Quick Answer: By and large, Game of Thrones has done a good job portraying its characters as they were originally described by George R. R. Martin in the books. There are minor alterations to most characters, but only a handful look dramatically different on TV than on the page.

For years, avid readers of George R. R. Martin’s A Song of Ice and Fire novels constructed their own mental ideas of how the characters looked. There existed creative fan art and illustrations, sure, but all those renderings were based on the vivid and specific descriptions given by Martin in the texts. In 2011, when HBO graced the world with its adaptation, Game of Thrones (2011 - ), everything changed. Suddenly, an expansive cast was portraying the characters people had been mentally conceptualizing since 1996. Fans of the novels were forced to compare their mental constructs to what they saw on screen.

Most of the characters are played by actors substantially older than their literary counterparts. Ages aside, though, the majority of Game of Thrones’ character representations are faithful to Martin’s, while a handful have seen a wild departure between the way they look on-screen and in the text.

A website called Social2 photoshopped a series of images giving the television characters a more book-ish depiction, modifying their presentations to match what Martin originally described. The first batch of photos below are from that source, while the quoted descriptions are from Martin’s texts:

“A slight man with a bald head and a great beak of a nose stepped out of the shadows, holding a pair of slender wooden swords.”
Aside from having hair, Arya’s “dancing teacher” Syrio Forel isn’t too much of a departure. 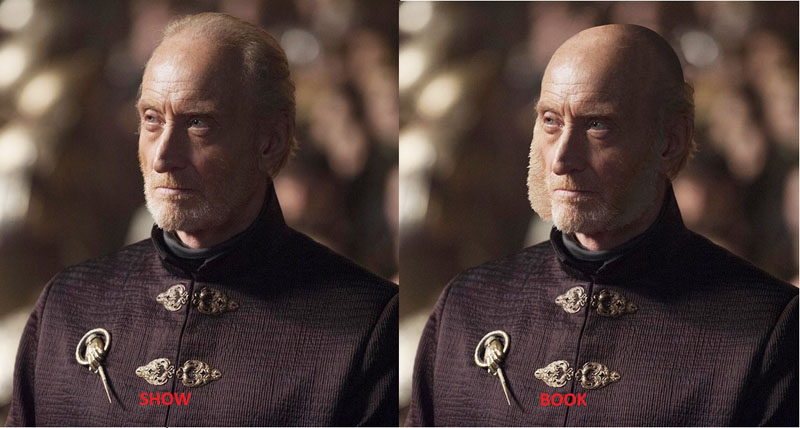 “The Lord of Casterly Rock was as lean as a man twenty years younger, even handsome in his austere way. Stiff blond whiskers covered his cheeks, framing a stern face, a bald head, a hard mouth.”
Tywin has the right hair, just in the wrong places. 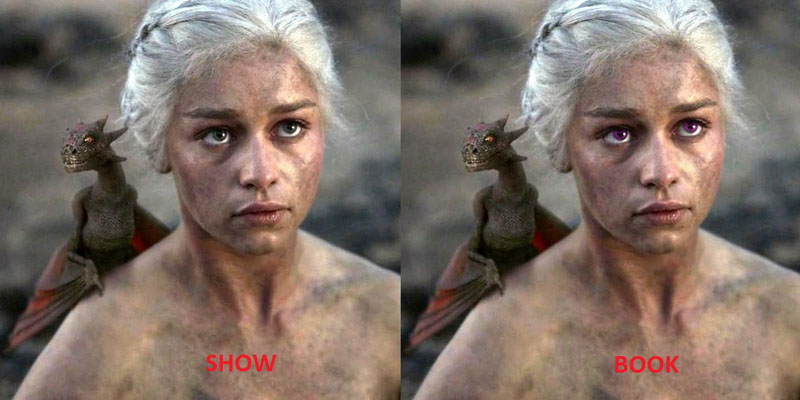 “They dressed her in the wisps that Magister Illyrio had sent up, and then the gown, a deep plum silk to bring out the violet in her eyes.”
If a different eye color was the most offensive diversion, this one would be pretty accurate. However, she’s supposed to have most of her hair burned off after living through the dragon birth fire. 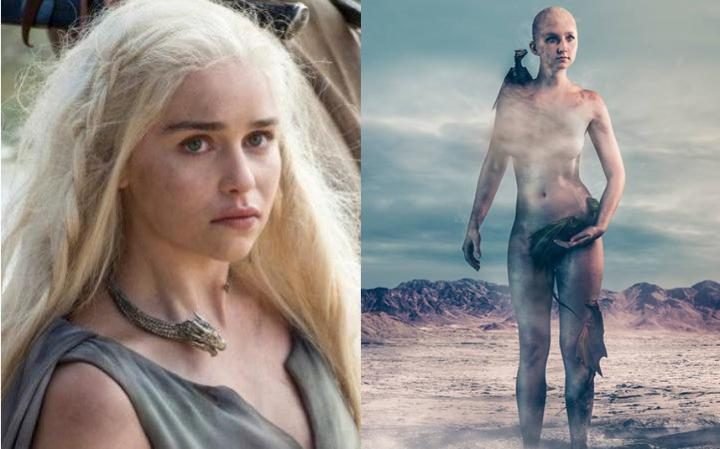 This artwork by Dahlia-Thomas is arguably more suitable. 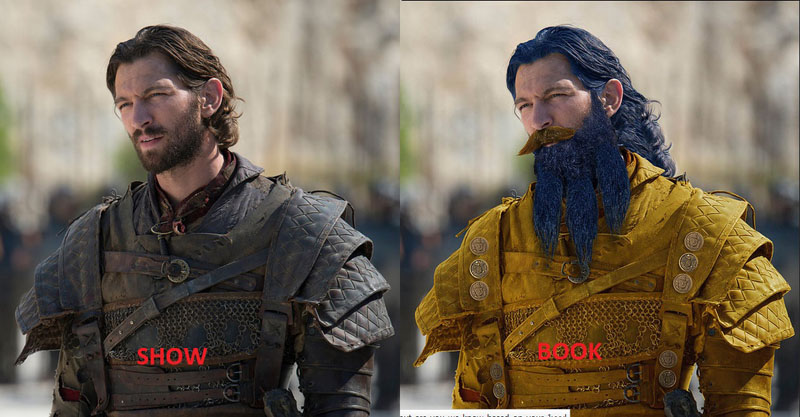 “Daario Naharis was flamboyant even for a Tyroshi. His beard was cut into three prongs and dyed blue, the same color as his eyes and the curly hair that fell to his collar. His pointed mustachios were painted gold. His clothes were all shades of yellow; a foam of Myrish lace the color of butter spilled from his collar and cuffs, his doublet was sewn with brass medallions in the shape of dandelions, and ornamental goldwork crawled up his high leather boots to his thighs.”
Huisman is the second actor to portray Daario on the series, but the first wasn’t any closer to fitting the book description. Blue-haired and crazy-bearded with flamboyant attire, the series producers clearly went for a sexier, more rugged bad-ass presentation for the character. Here’s an even wilder rendition, from Oddpad: 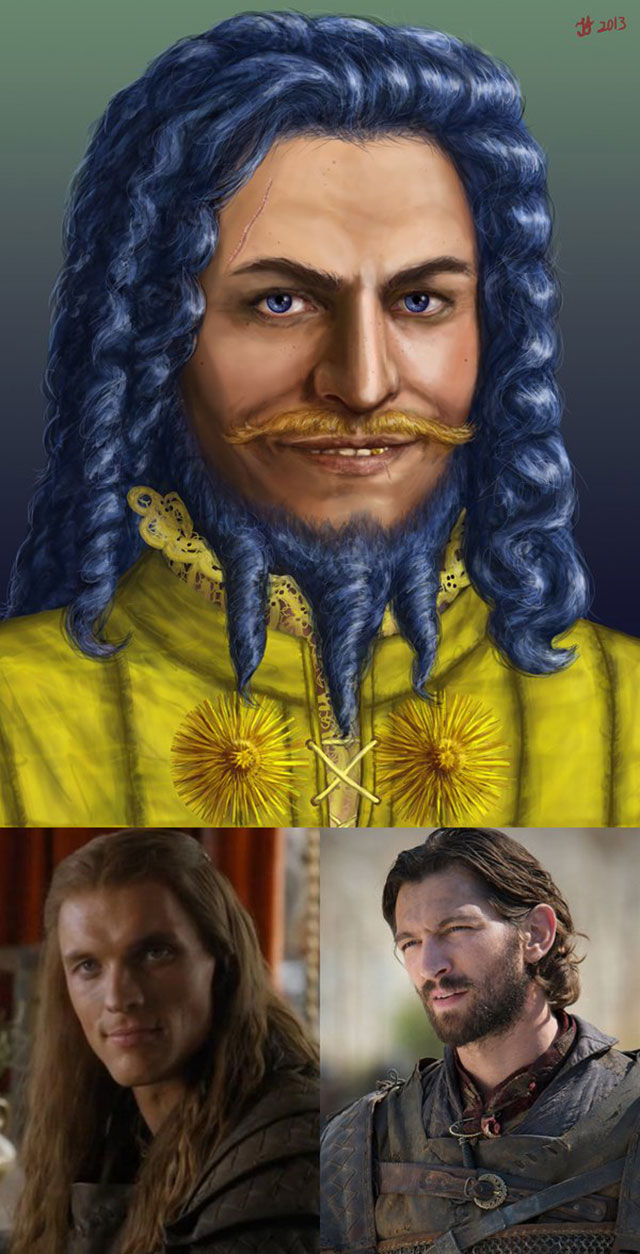 Granted, the Daario-Daenerys romance scenes would be a bit more awkward with the blue guy. 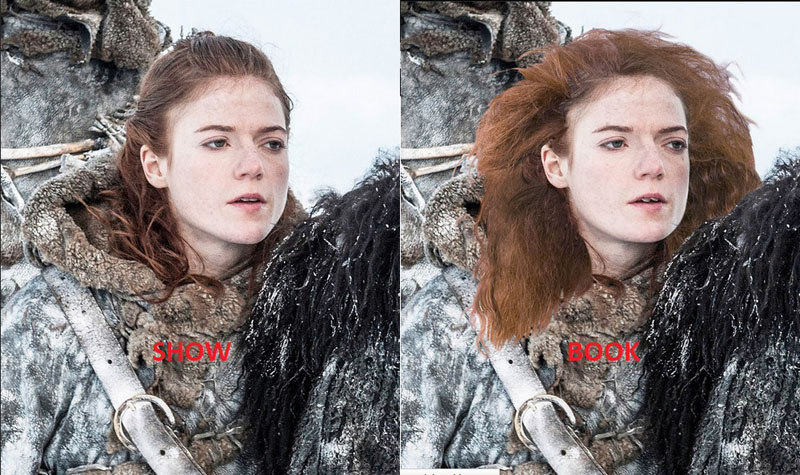 “Ygritte’s hair was such a tangle that Jon was tempted to ask her if she only brushed it at the changing of the seasons. At a lord’s court the girl would never have been considered anything but common, he knew. She had a round peasant face, a pug nose, and slightly crooked teeth, and her eyes were too far apart.”
One of the early complaints about Rose Leslie’s casting was that she’s too pretty to by Ygritte, who is described as a lot less becoming than she is in the series. By the sound of it, the above Photoshop job could make her even a bit rougher. 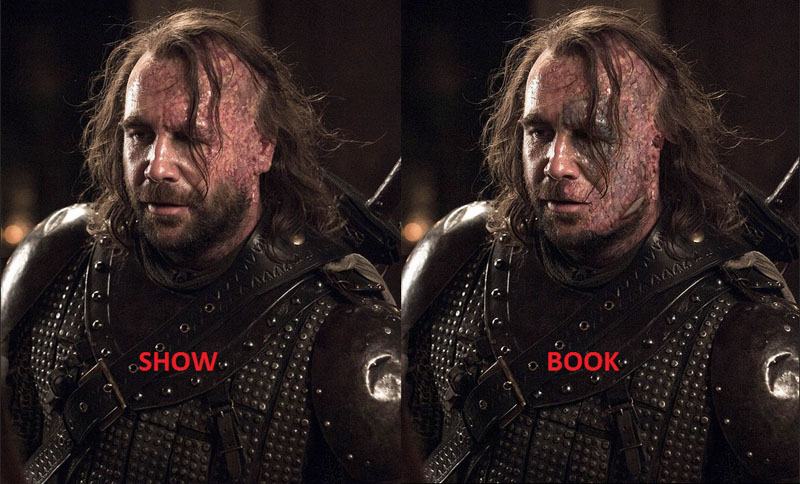 “The left side of his face was a ruin. His ear had been burned away; there was nothing but a hole. His eye was still good, but all around it was a twisted mass of scar, slick black flesh hard as leather, pocked with craters and fissured by deep cracks that gleamed red and wet when he moved. Down by his jaw, you could see a hint of bone where the flesh had been seared away.”
That’s right - The Hound should look even more offensive than he does. 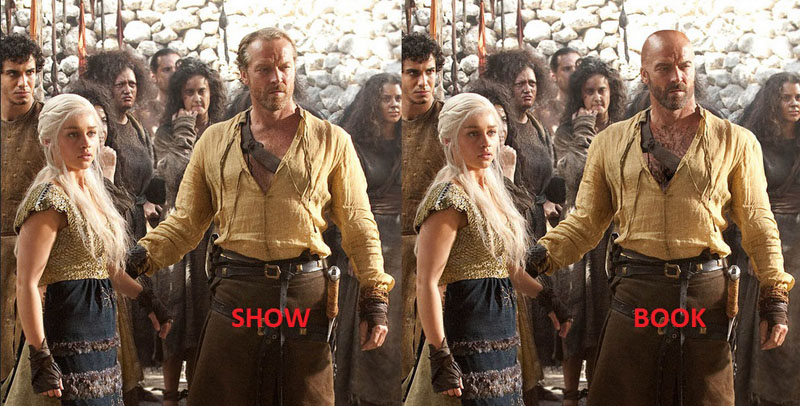 “Ser Jorah was not a handsome man. He had a neck and shoulders like a bull, and coarse black hair covered his arms are chest so thickly that there was none left for his head.”
Some may argue the book version is even more handsome. Here is yet another rendition of this change: 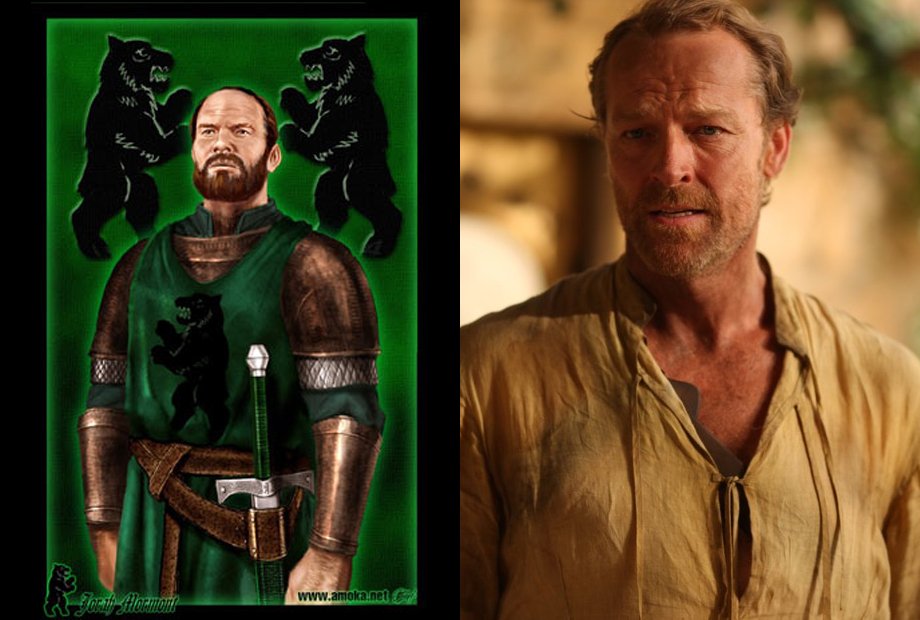 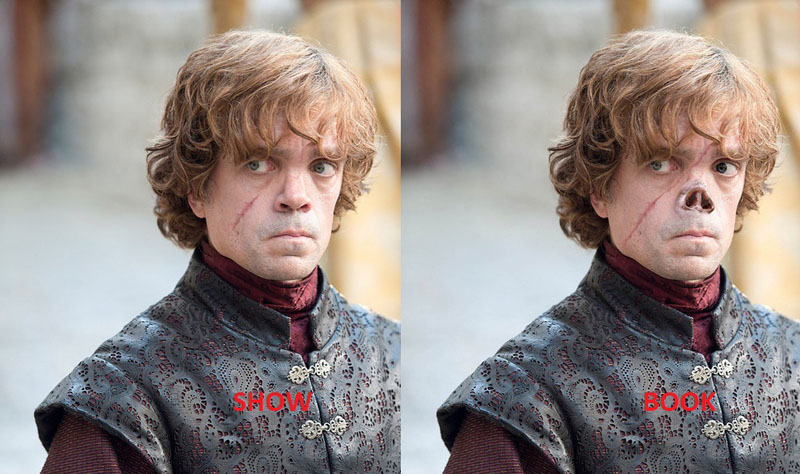 “Tyrion’s fingers went to the great gash that ran from above one eye down to his jaw, across what remained of his nose. The proud flesh was still raw and warm to the touch.”
Also: “One green eye and one black one peered out from under a lank fall of hair.”
The Battle of Blackwater would have hurt Tyrion more substantially than the show depicts.

The following artistic renditions are from other sources: 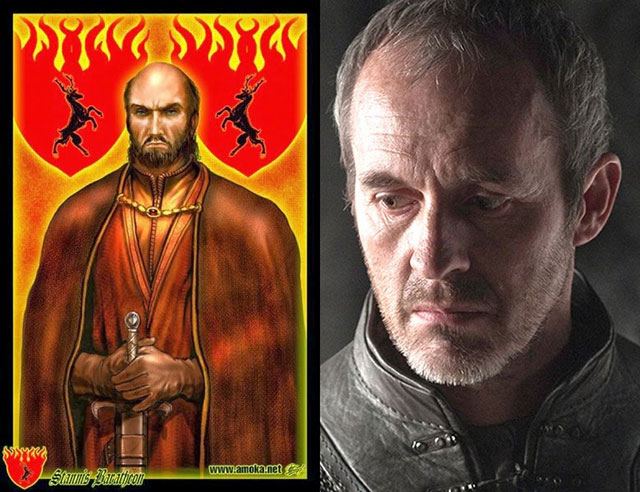 His wiki description: “Stannis is a large man - tall, broad shouldered and sinewy. Jon Snow notes that Stannis towers over him. Stannis has dark blue eyes and a heavy brow. His head has only a fringe of black hair ‘like the shadow of a crown,’ and he has a close-cropped beard across his large jaw. His face has a tightness to it like cured leather, and he has hollow cheeks, and thin, pale lips.”
Aside from having a bit too much hair on his head, Stannis comes across with great accuracy through Stephen Dillane. 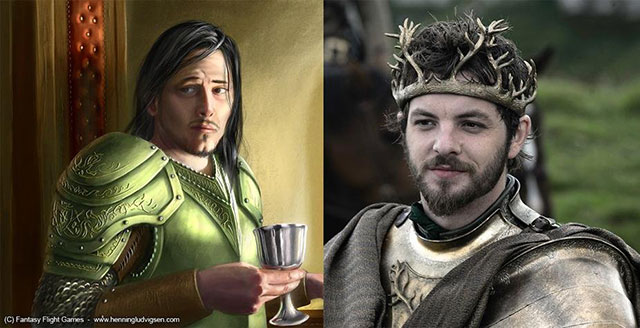 His wiki description: “Renly is twenty-one years old, a tall, man with black hair falling to his shoulders. He is thought to look eerily similar to a young Robert, though several inches shorter, and far less muscular. In ‘A Game of Thrones’ he is said to wear green to match his eyes, but in ‘A Clash of Kings’ he is described as having blue eyes like Robert.”
Gethin Anthony’s Renly is a good bit different from the way he is described in the books. 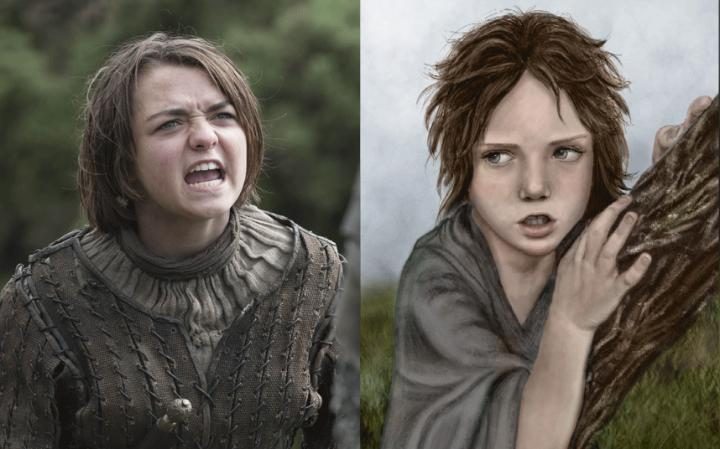 Her wiki description: “Arya’s appearance is more Stark than Tully, with a long face, grey eyes, and brown hair. She is skinny and athletic. At the start of the story, she is generally regarded as plain, as exemplified by her nickname ‘Arya Horseface,’ and often mistaken for a boy.”
Like most of Game of Thrones characters, the actress playing Arya is quite a bit older than the character is in the novels. In exchange, she loses some of the childlike definition of her character.

From the throne’s wiki: The throne is “an asymmetric monstrosity of spikes and jagged edges and twisted metal. It is uncomfortable, and the back is fanged with steel which makes leaning back impossible. Aegon I had it made this way deliberately, saying that a king should never sit easy. King Aerys II Targaryen, the ‘Mad King,’ was always cutting himself upon it, and it is said that the throne itself has caused the deaths of several people.”
While the HBO series’ representation of the throne is now iconic, George R. R. Martin has said the painting above (left) is the most accurate to how he envisioned the Iron Throne. It is said to be constructed a thousand swords, far less than are present in the much-more symmetrical and precisely-built television version. 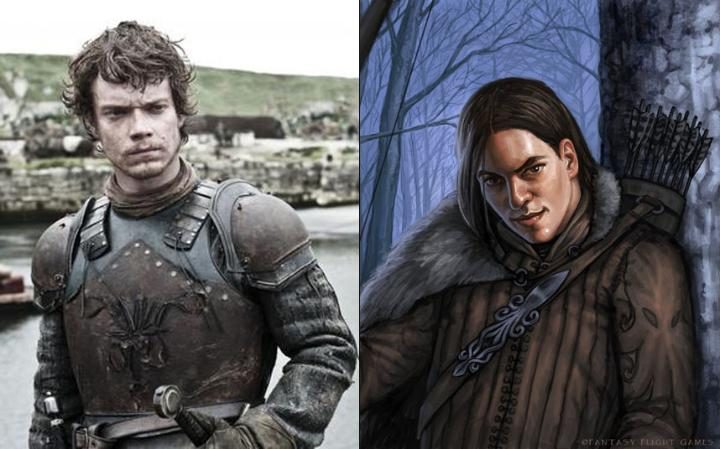 Artwork from Fantasy Flight Games, by feliciacano. The Telegraph describes Theon as “A nineteen-year-old with black hair and a cocky grin. After he is tortured by the despicable Ramsay Bolton, Theon becomes thin and his hair turns white from the trauma.”
Alfie isn’t the spitting image of Theon, and post-torture certainly carries more fingers and teeth than he ought to. It still works as an appropriate representation. 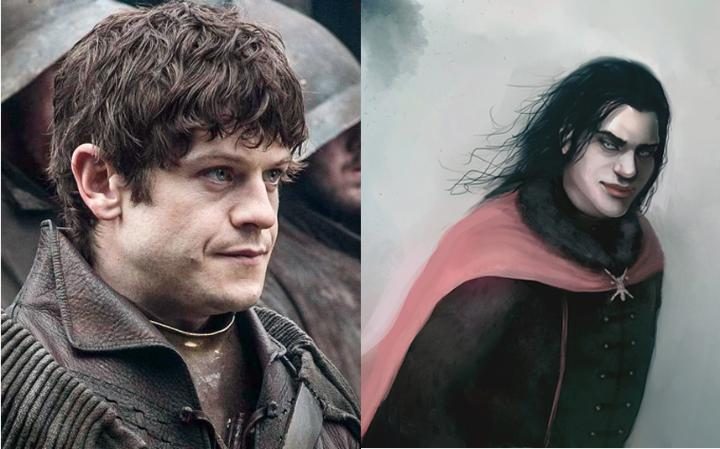 Artwork by LynxSphinx. Ramsay is described as ugly, big-boned, with sloped shoulders. “He is described as having a pink and blotchy skin, a broad nose, small mouth and long dark hair. He has his father’s eyes — small, close-set and pale.”
Ramsay may not be as ugly on television as he is in the books, but he’s certainly just as disgusting on the inside. 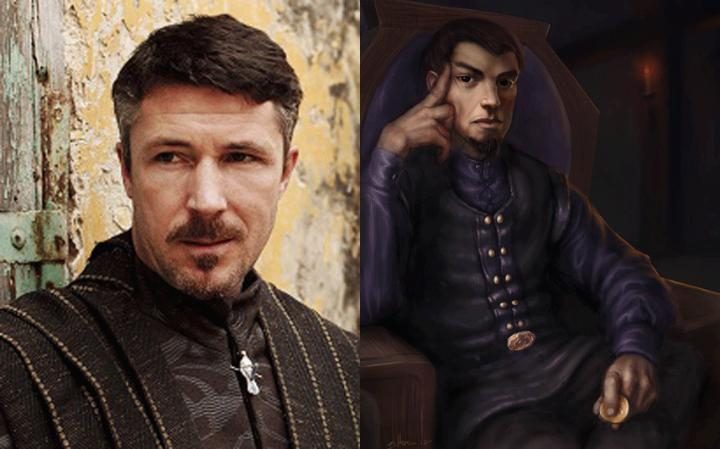 Artwork by Britt Martin. Littlefinger has “sharp features, dark hair with flecks of grey, and a small pointed beard.”
This one is pretty spot-on. 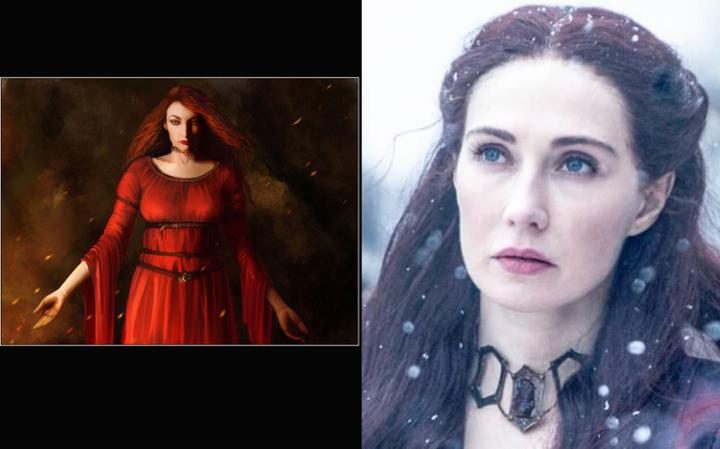 Artwork by jezebel. “Melisandre uses her beauty to win people over, with pale skin and long, copper hair. She has a voluptuous figure and narrow waist — never seen without her red and gold choker, which is set with a ruby.”
Carice van Houten is as perfect a Melisandre as one could ask for. Her embodiment of Melisandre is one of the series’ finest casting and costuming moves. Her radiant presence stands out in so many scenes set in dark, dreary locales, and her beauty is rivaled only by her intensity. 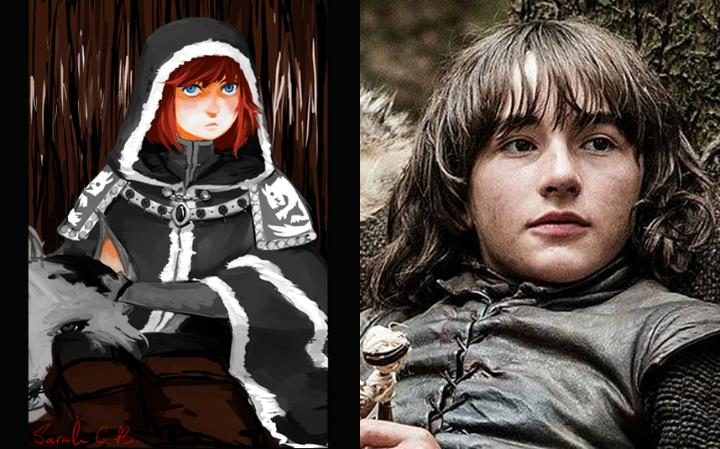 Artwork by lokiescape. From Bran’s wiki entry, “Bran has his mother’s coloring, with the thick auburn hair and deep blue eyes associated with House Tully.”
On the series, only Sansa (Sophie Turner) has the physical characteristics of the Tully side of the family. She is fair and red-haired like her mother, whereas all the other Stark children look more like their father. Bran is no exception, rendering him quite different from Martin’s texts. 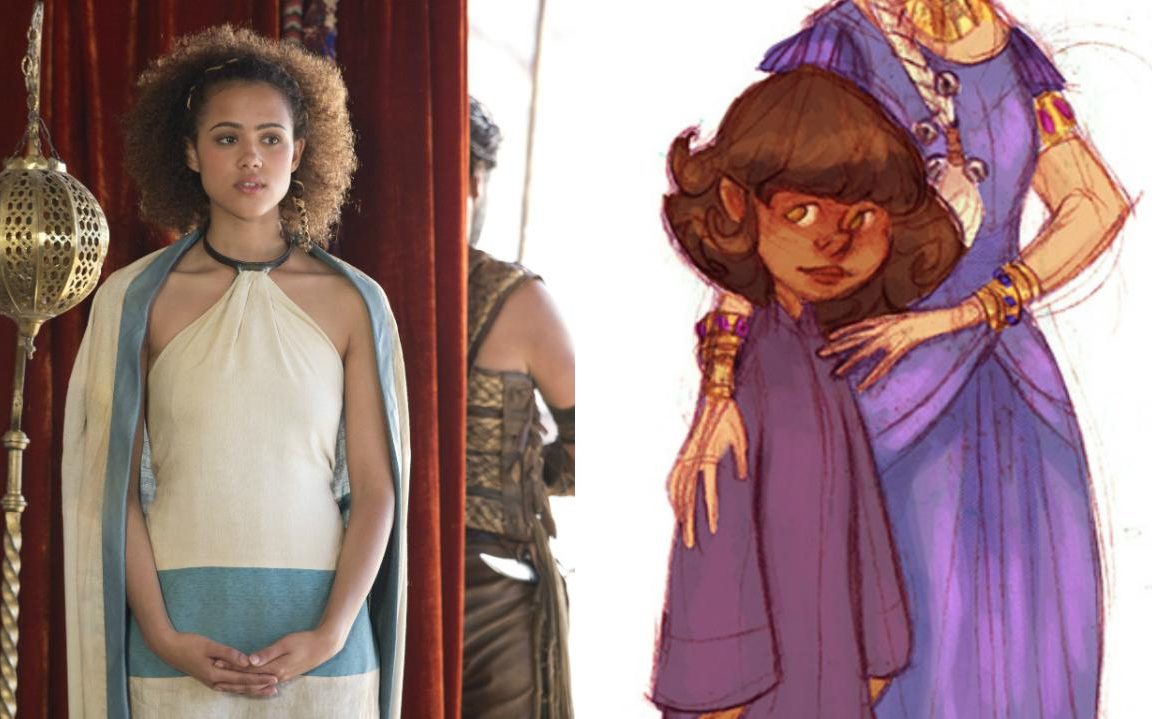 Artwork by MargotDraws. Her wiki entry reads, “Missandei has a round flat face, dusky skin, and eyes like molten gold. Although only ten, she is very strong willed and intelligent. She has a sweet, strong voice.”
Instead of a ten year-old kid, the series cast a gorgeous woman in her late 20’s. The intelligence and sweetness are there, but she clearly looks nothing like she does in the stories. 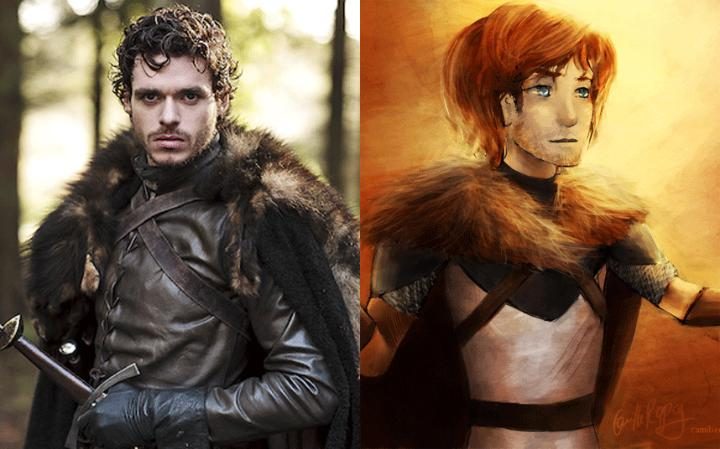 Artwork by camibee. From his wiki entry, “Robb’s appearance favours his Tully side, with a stocky build, blue eyes and thick red-brown hair. He is strong and fast. He opens the series as a boy of fourteen years.”
Much like his brother Bran, the series made Robb look more like a Stark than a Tully. His hair is the wrong color, his eyes are the wrong color, and he is massively older than the Robb of the books. Not a great match, but a perfectly suitable casting for the purposes of the show.