How did “The Maltese Falcon” help craft the noir film genre?

“You go and make The Maltese Falcon exactly the way Hammett wrote it, use the dialogue, don’t change a goddamn thing and you’ll have a hell of a picture,” Howard Hawks said to first-time director John Huston.

Detective stories have existed in film since the early days of cinema. But it wasn’t until the talking pictures that narratives were able to elaborate the verbal drama that eventually became film noir. In the 1930s, detective films followed a typical structure employing light comedy and less concentration on the gritty details of the mystery, even if the film’s source material carried a darker tone. The pictures were carried largely by the charming nature of the detective who was engaging to watch more than the mystery itself.

The Maltese Falcon existed in film versions in 1931 and 1936 before the famous 1941 Humphrey Bogart picture. The first two depicted a Sam Spade that was much more a wisecracking fellow bent towards seduction and comedy. Those characteristics were the point of the films, with the mystery carrying the wave of humor and seduction. In 1941, The Maltese Falcon starring Bogart and Mary Astor, directed by John Huston, changed the film’s tone to the style of film noir. Humor was replaced with a few dark verbal jabs. Seduction was almost nonexistent—Bogart’s Sam Spade completely denied the advances of some women, while his affection for others was colored with scorn. His attractions to women are not out of whimsy or fun, but danger. And the dangerous female became a common device for the noir genre.

From William Luhr’s “The Maltese Falcon. John Huston, Director”, he says, “The term means “black film” and indicates a darker view of life than previously common and a concentration upon human depravity, failure, and despair. The term also implies a cinematic style—a way of lighting, of positioning and moving the camera, the use of an introspective voice-over narration, often heavily reliant on flashbacks—and a choice of setting, generally a seedy, urban landscape, a world gone wrong. Film noir has stylistic antecedents in German expressionist films of the 1920s, as well as in American horror films and radio dramas of the 1930s, and thematic antecedents in the hard-boiled fiction of the 1920s and 1930s. The style did not fully develop until a few years later with films such as Double Indemnity (1944) and Murder, My Sweet (1944). However, substantial foundations were laid in 1941 with films such as The Maltese Falcon with its themes of widespread evil and deviant as well as manipulative sexuality, and Citizen Kane with its dark, expressionist look and fragmented narration.” 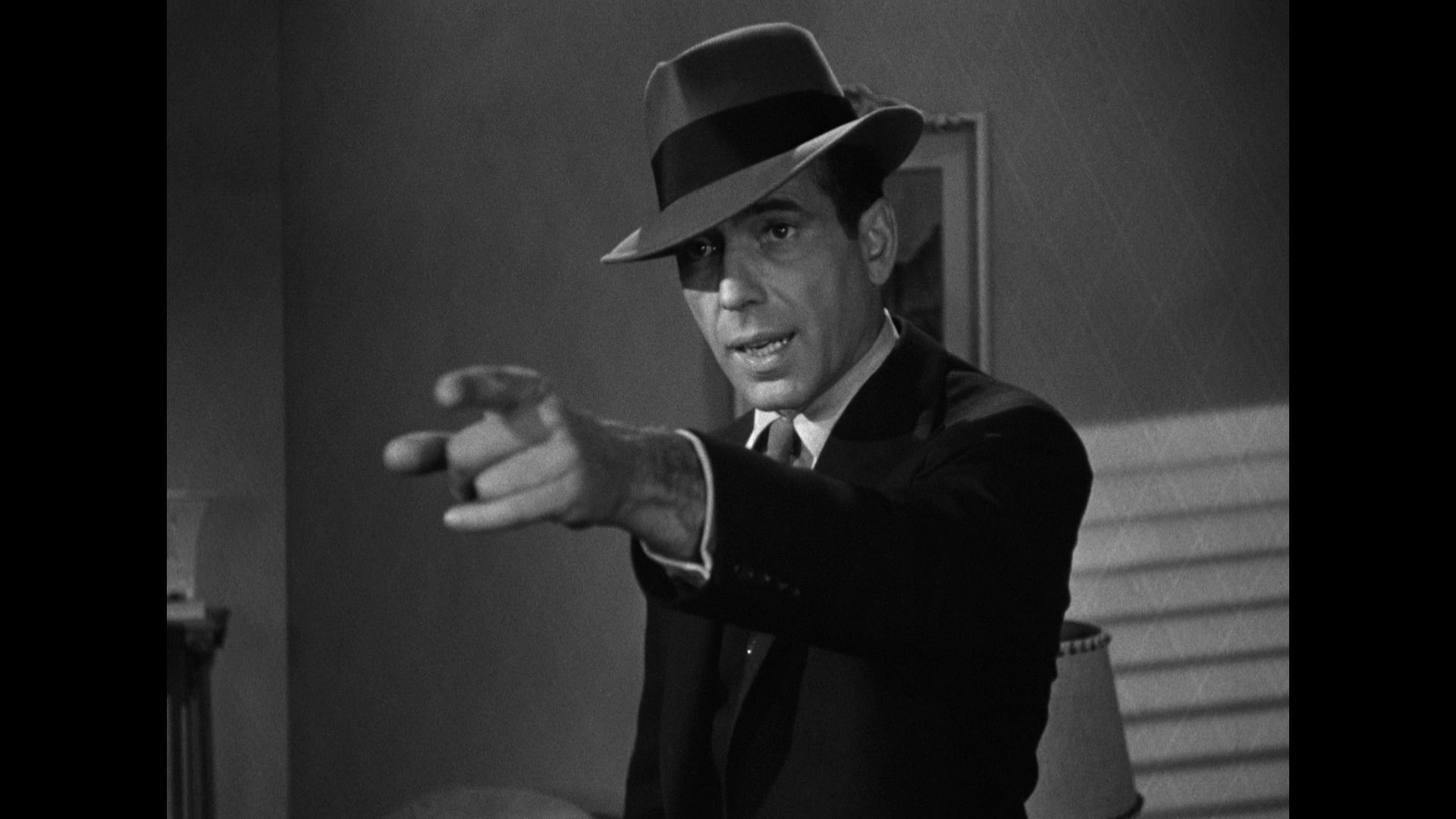 Film Noir Studies elaborates, saying, “The Maltese Falcon could be described more accurately as a transitional film that marks the boundaries between true film noir and films that have few or no noir elements. The Maltese Falcon introduces elements that later became hallmarks of film noir — in particular the alienated and amoral hero, thefemme fatale, and the dark and disturbed urban environment in which they live — but it stops short of a purely noir outlook and visual representation. [The film reacts] against the dominant ideology of society and the conventions of contemporary Hollywood films. The Maltese Falcon transforms the traditional detective film and signals the shift to film noir.”

The film doesn’t have the chiaroscuro look of expressionism the way later films do, tending more towards a well-lit studio presentation. Nor does it use fragmented voice-over narration, which would become a genre staple. But it does reveal character traits that became extremely prominent.

Sam Spade is no Sherlock Holmes or Philo Vance. He’s not a charming hero, he’s alienated, works against authorities, and is morally ambiguous. He’s a greedy fatalist with a cynical view of everything around him. He lacks compassion and concern for others. In short, he’s sort of a jerk. Film Noir Studies goes on to state that Spade isn’t a true noir hero due to his ability to control himself, but The Maltese Falcon and the character of Spade served as the segues that ushered in the era of true noir. That would be especially true through the film’s methods of challenging masculinity and femininity. Much of noir sees the typical gender roles reversed, with women the intelligent and often conniving characters that bend the men to their will. The Maltese Falcon certainly utilized this disruptive power balance to great success.

The film worked with the Hays censorship code in ways that kept the viewer on the edge of forbidden content. Its dialogue contains hints of taboo subjects for the 1940s, such as character homosexuality and Spade’s own sexual activity, but never implicitly notes them. The subtext created and manipulated an unsettling mood. The noir genre would go on to continuously challenge censorship and subject matter in dark and stylistic ways. This atmosphere eventually became a telling mark of the genre and one of its definitive characteristics. The film provided the formula for film noir, and everything that followed owed a debt to John Huston and his creation of the Dashiell Hammett novel.