Filmmaker’s Handbook: What was Kinescope Recording?

Quick Answer: Kinescope recording was the process of recording a television broadcast onto a film reel by pointing a camera at a video monitor as it played the footage. The result was a poor-quality, grainy recording of the material. This was the common method for showing television productions in other markets during the early 1950s, before the invention of video tape.

If you are a product of the modern era, be glad you weren’t watching television in the 1950s. What you would have been watching, particularly if you live on the west coast, is a low-quality recording of a program most likely first performed in the east, shoddily duplicated for later airing in other markets. Kinescoping was the name of the practice.

“Kinescope” is actually a technical term for the cathode ray tube in older television technology. “Kine” from the word kinetic, referring to motion, and “scope,” referring to viewership, forms the word.

In the early days of television, the medium experienced a crisis of identity. American consumers loved having this strange little box in their house which would broadcast pictures into their living rooms, but studios and producers weren’t sure how to best leverage the medium, or how to best distribute the programs they created. Further, the technology was extremely primitive, and the programming operations we’ve now been accustomed to for decades were all but impossible. Most programs on television were filmed in New York City in front of live audiences. They were aired live for east coast homes (where the densest population of television-owners originally lived) and would have to be duplicated and re-played later for west coast residents in different time zones. This was a huge ordeal, and where kinescoping came into play. 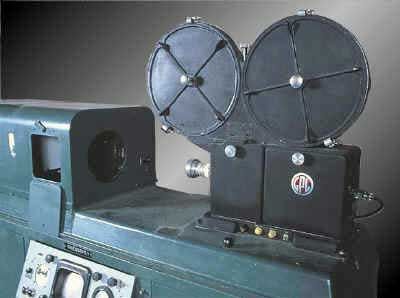 Kinescopic recording was super rudimentary as video tape was not yet invented. Kinescope recordings were created by literally pointing a camera at a video monitor and recording what it played, saving the product onto 16mm or 35mm film. The result was a grainy, fuzzy, and distorted picture which looked quite poor. As this was the only method of documentation available to stations of the time, this is the format from which many programs would be rebroadcast to locales outside the reach of the originating station’s antenna. These kinescopes would be shipped around and played for other markets.

It wasn’t until Lucille Ball and Desi Arnaz recorded I Love Lucy (1951-1957) on 35mm film (an expensive and unprecedented move) when programs could be shown with the same quality across the country. This was expensive—recording every shot and every take of a series directly onto film was way more expensive than transferring a completed program onto film once via kinescope. Still, Ball and Arnaz filmed the program in California instead of New York, helping champion California into the television hub it has now been for many years. The process kicked off the eventual demise of the kinescope and introduced the rerun and television syndication as huge new directions for the market.