Did “His Girl Friday” reflect the behaviors of classic news men or help create the stereotype?

When you think of a 1940s journalist, what do you picture? A quick-talking, jab-making, chain-smoking man ready to do anything for a story. He’s bad at having a family but great at getting a scoop, chattering prose to himself as he bangs the keys of a typewriter in a mad frenzy, up all night as he punches out the final details of his submission to the morning edition. He knows exactly what he wants, how to get it, and how to spin any story to the angle that suits his agenda. He’s a definitive character and the one made famous by films like Howard Hawks’ His Girl Friday (1940), the Cary Grant and Rosalind Russell film adaptation of Ben Hecht’s The Front Page—but is he a caricature created by the movies?

The Guardian calls the film “the movie that launched the careers of a thousand journalists, convinced that newspapers meant flirtation, dazzling, rapid-fire wit and lots of smoking.”

Journalism historian David Spencer wrote in his book The Yellow Journalism: The Press and America’s Emergence as a World Power about the way journalists were represented in the early days of the media, as it led up to His Girl Friday. He writes, “The demographic class occupied by working journalists was not far from the bottom of the social ladder. Most journalists were underpaid, drank too much, and were rude and ruthless and fundamentally dishonest. They could not hold a job and drifted from city to city, constantly looking for work. They struggled through long and exhausting hours of labor and lived in hovels on the wrong side of the tracks, often having only the local saloon as a place of comfort. As journalism history professors Steven Vaughan and Bruce Evenson discovered in their study of journalism on film, such images of journalists persisted well into the 1930s, as seen in Ben Hecht’s play The Front Page. It was only when the American Newspaper Publishers Association began to complain that revisionist histories, such as His Girl Friday and the 1940 remake of The Front Page, began to soften the image of the hardened journalist.”

Spencer argues that dishonesty was a principal quality inherent in newspaper men during the reign of Heart and Pulitzer. It was nearly impossible for a journalist to be successful if he wasn’t dishonest, both in terms of collecting and publishing information. This theme is constantly noted in His Girl Friday, from the duplicitous motivation behind nearly all of Walter Burns’ (Cary Grant) actions, and the behaviors of the news men in the office who are regularly seen on the telephones, each providing their own exaggerated and sensational descriptions of how a story happened. For instance, the moment when Earl Williams (John Qualen) is removed from the desk by the authorities. Every reporter in the room has his own version—he put up a struggle, he went peacefully, he knocked out police before being subdued.

Burns had used deception to build himself into a highly-regarded newsman, he’s deceptive in his means of winning back Hildy (Rosalind Russell) from her fiance in just a few hours time, he’s deceptive in the way he hires and fires people. For the most part, nothing that comes out of his mouth is true—but instead of characterizing him as a destitute and depressed slog, he’s the pinnacle of envy. Tall, charismatic, with fine fedoras, seemingly endless supplies of cash, and that trademark Cary Grant smile. 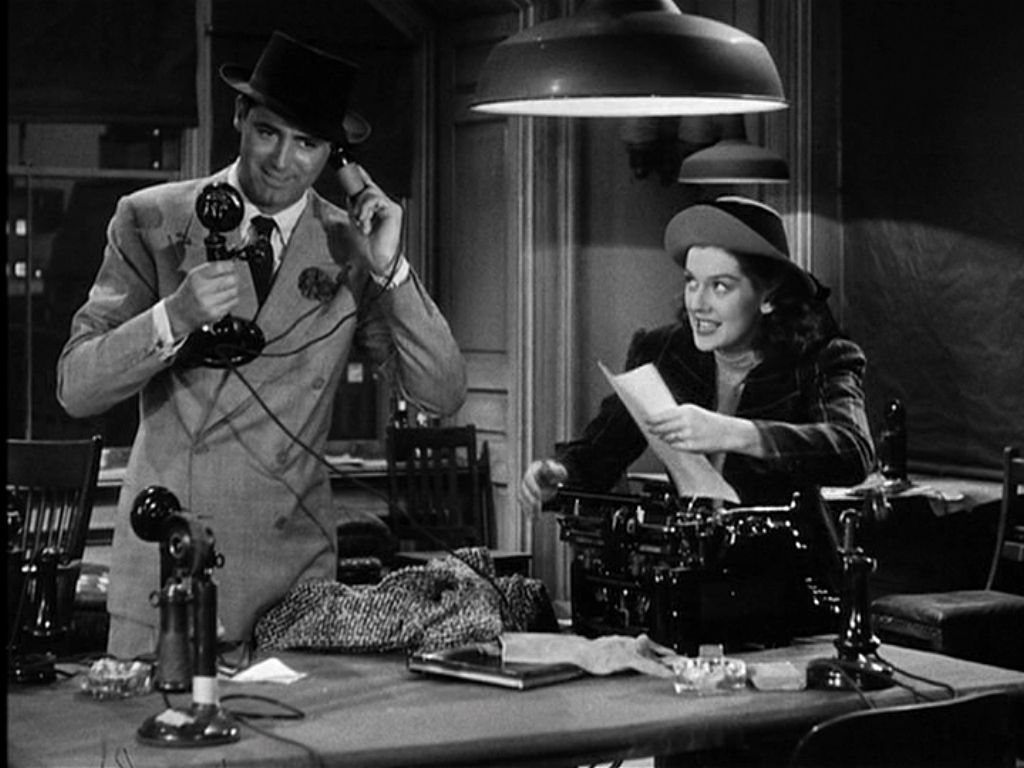 Hecht, who wrote His Girl Friday’s source play, came from humble beginnings and worked as a circus acrobat in his early years. The Daily News sent him to cover events in Berlin in 1912, where he would frequent a bar, according to Spencer, “he was known to hold court until the wee hours of the morning, often playing the piano while his comrades emptied bottles of cognac, scotch, and Rhine wines while puffing on exotic European cigarettes and Havana cigars.” Hecht went on to cover crime and corruption in Chicago, one of America’s cities most known for its historical crime and corruption. He was a bit of a romanticized journalist himself, not too many shades removed from Walter Burns.

The film’s opening title card claims the picture is a representation of long-dead journalistic misconduct. It reads, “It all happened in the ‘Dark Ages’ of the newspaper game—when a reporter ‘getting the story’ justified anything short of murder. Incidentally, you will see in this picture no resemblance to the men and women of the press today.” Of course, they know the practices of their film men continue to be relevant to viewers in 1940. Hildy repeatedly references the “inhuman” nature of newspaper men, who are seen in the film ignoring a woman so devoutly that she kills herself—then the men show an interest in her as she’s become something new to write about.

His Girl Friday presents journalism as endless excitement. Hildy is said to want to leave the field, tired of “living like an animal,” wanting to settle down and have babies and knit with the milquetoast Bruce Baldwin (Ralph Bellamy, who Grant’s character says looks just like Ralph Bellamy in a very meta moment for 1940). As the story goes, she can’t do it—she’s too seduced by the excitement of the field and by Walter, the man who embodies the business.

Deep Focus Review begins their discussion of the film with the line, “One has to wonder if newspapermen like the ones in His Girl Friday ever existed, or if the film created the stereotype.” The film is called a screwball comedy, after all, and comedies come with preposterous characters. It’s hard to imagine a newsroom full of Burns and Johnson-types actually getting anything done beyond bickering in endless contest. The AV Club says the film “salutes journalism,” and that it surely does. Still, films like His Girl Friday most likely helped create the witty, fast-talking, hard-nosed type of reporter that comes to mind when we reminisce on the era.