Despite the unlikely and challenging task of adapting a cellphone game to the big screen, the team behind The Angry Birds Movie (2016) has proven that their work paid off. Since Angry Birds opened in May, the film has grossed over $250 million worldwide.

Pete Oswald, the film’s production designer, is a key figure that helped bring Angry Birds to life. Before joining an Angry Birds panel at the Apple store in San Francisco, Oswald took the time to speak to ScreenPrism about animation, the adaptation process, and how dodging diaper changing duties to play Angry Birds definitely counts as research.

ScreenPrism: Would you describe yourself as a tech person or a pen and paper person?

PO: I’m a little bit of both. I would say that when it comes to technology I’m not the most savvy, but I do love it and I do appreciate it. I have a kind of definite wonder about it. My brain works more with the creative, pen and the paper side — kind of the analog side of it. Relating this to Angry Birds, I actually started playing the Angry Birds app when it came out. It’s so funny because I’m not a gamer, but I got addicted to the game. Little did I know that two years later I would be designing for the film. It turned out that all that time playing the game and not helping my wife change the baby’s diaper was actually research. It was actually a good thing.

SP: I was a little skeptical, I admit, when I heard there was going to be an Angry Birds movie.

PO: I think everybody was. I was also a bit skeptical, too. I was like, “How are they going to adapt this?” When I first got a call from one of the producers, we sat down and talked about the script and talked about the directors that are involved, Clay Kaytis and Fergal Reilly. The producer, John Cohen, gave me the script pitch and I thought, “This is going to be something really fun and unexpected. People are not going to expect this from an Angry Birds movie, especially because of the comedic [talent] of all of these amazing actors that are involved.” 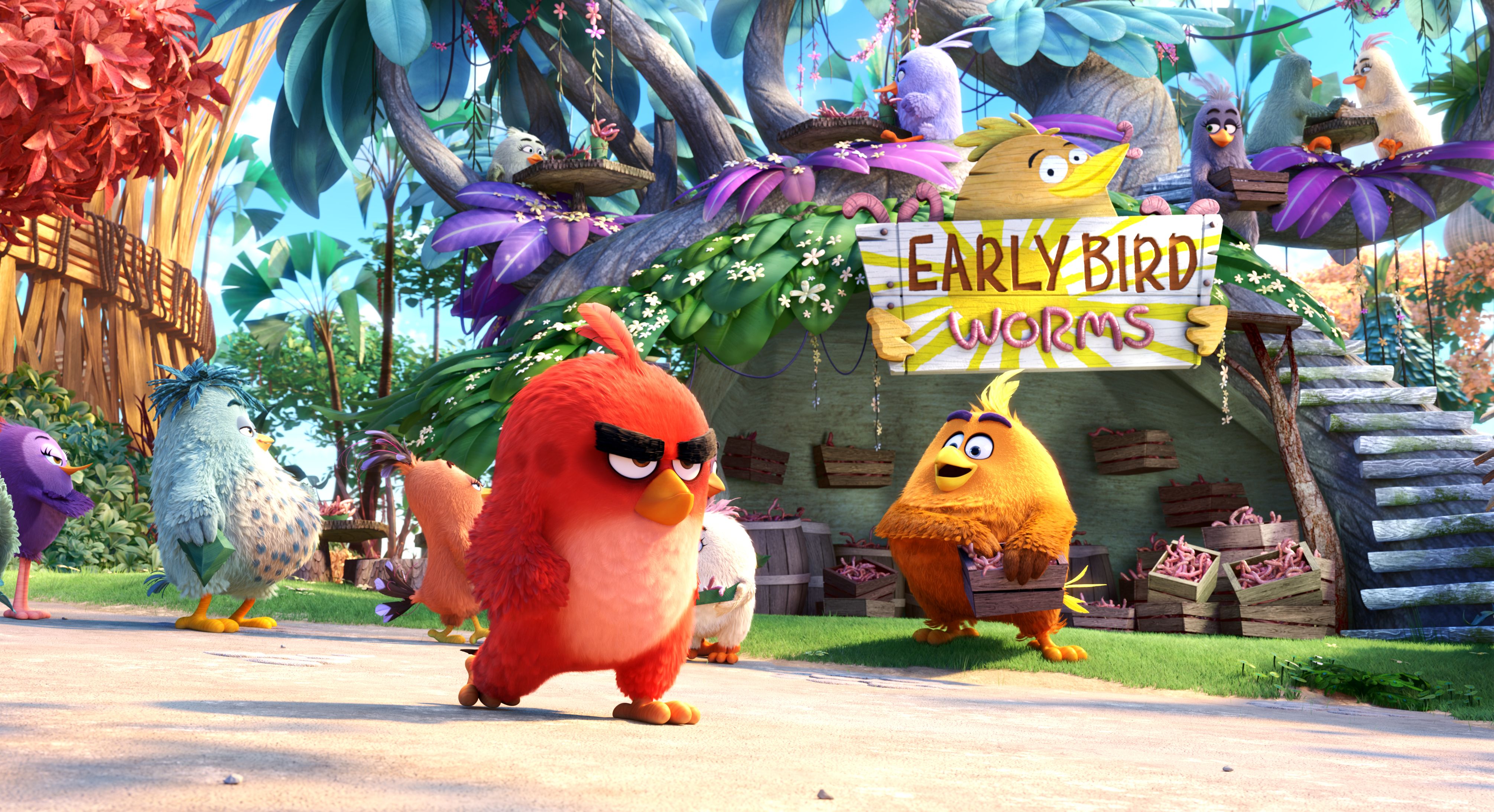 SP: So, why an Angry Birds movie? How did you go about adapting a two-dimensional game with no story into a feature film?

PO: To answer the question of “why,” I think it’s because this has become a cultural phenomenon. Four-year-olds know Angry Birds and eighty-year-olds know Angry Birds. It’s so widely known and so iconic; [the question] isn’t really “why” but “why not?” Why not create a really fun, funny, heartfelt story about these characters? One of the biggest challenges of the project was paying homage to the iconic brand and creating characters that still resemble the ones from the game, but also taking it to a whole other dimension — a cinematic dimension: creating lovable characters to make people laugh and hopefully love and hopefully want to come back and see multiple times.

What I love about the original game design is that when you see it, it is immediately recognizable. When we were designing the characters, we knew that these characters had to emote and they had to walk and talk. Now the birds have legs and they have wings and everything. We really tried to find the most expressive way to do that so these characters can live and breathe. We took the basic idea of the game, circles, triangles, squares — really simple shapes — for the base of our design theory for designing the characters. Then we added layers of richness and complexity. For example, Red’s fur and his feathers. There are a couple of shots in the film where you really see it up close and just the intricacy and the richness of the work that is based on this really simple silhouette is a really great mixture of design.

SP: The design of Bird Island is so charming.

PO: When we were designing Bird Island, we wanted it to be something familiar and yet unexpected. We wanted it to feel like it was a real place, but it’s something that nobody’s ever seen before. The birds on Bird Island are flightless birds. They’ve never been off the island so the only thing they know is this island; they don’t know of anything to exist beyond that. In order for the birds to have an affinity for the place, we made the foliage on the island have a design motif that reflects the feathers of a bird. If you were to look at the bark of a tree really closely or a leaf of a tree, you’ll see that it resembles patterns on a bird feather. It’s these kind of little subtle layers of richness that, to me, really, really gave the film meaning and life.

SP: It has an emotional depth that you wouldn’t expect from a cellphone game.

PO: That’s something that we were definitely striving for. SP: How did the adaptation process of Cloudy with a Chance of Meatballs (2009) compare to that of Angry Birds?

PO: Every project is different. Every problem — design problem or story problem — is different. With Cloudy with a Chance of Meatballs, the directors were Chris Miller and Phil Lord. These two guys are just so creative; they’ve done so many great things are doing many awesome things right now. They really came to the table and said, “Hey, we want to make this film the most expressive and cartoony that we can.” We looked at Muppets and we looked at the cartoony-ness and really looked at making those characters expressive in a way that really hadn’t been done in CG up until then. For some of Flint’s facial features when he opened his mouth, we literally had to break the rig [and] break the model in CG to open his mouth. Usually, on other films, you wouldn’t go that far, but they always wanted to push that kind of expressiveness.

SP: What does the production design process look like for an animated movie?

PO: In animation, everything has to be designed. It’s unlike live action where you can pick up a camera and just start shooting. [In live action] you can go outside and you immediately have a background. In animation, you have to create everything from the environment to the characters to the props to the little pebbles on the ground, to grab stuff that the audience won’t even necessarily look at, but [make sure] they’ll feel it. And if something’s wrong you’ll realize it, but if it’s right you’ll concentrate on the character and the emotion. I think that’s ultimately when a production designer’s job has been done well; it’s a feeling. Its not necessarily like, “Oh, I saw that amazing tree or that amazing flower.” It’s just something that engrosses you.

There’s literally a small army of artists creating these films. There are so many steps to go through to create one of these films. People don’t realize that the average time to make one is three to four years, sometimes longer. It’s my job as a production designer to maintain the original theory and the original idea through each department [it goes through] because it is being touched by so many different people. It’s easy to go astray and to kind of go off on a tangent and then later step back and look at things and realize, “You know, that’s changed from our original conception. We need to go back and make sure that it stays on track.” Or, sometimes, it’s the reverse. We’ll say, “You know what? It’s changed but its better now.” Sony Pictures Imageworks really did an amazing job of that—of improving everything that we were able to make.

SP: How did you get started in animation and production design?

PO: I grew up in Salt Lake City, Utah. My mother is an artist. She was teaching art lessons from our basement. So from an early age, I grew up painting and drawing and flexing those creative muscles. It because a natural thing [to pursue that] when it was time to get ready to go to college. I was looking at art schools and looking at other universities and I finally found Loyola Marymount. They were just getting started with an animation program and it didn’t really occur to me that you could do that as a job. I started looking into it more and realizing that a lot of my drawings had an animated, energetic feel to them. So I said to myself, “You know what? Let’s do it!”

SP: Are there any Easter eggs that we should look for when we watch The Angry Birds Movie?

PO: In the first sequence of the film when Red’s in bird court and he’s talking to the judge, the judge is standing on a pulpit which is made out of an old petrified tree trunk. If you look at the scallops, the bark on the tree, it looks like a scalloped bird feather wing. It has that look to it. So it’s definitely something to look for. And it’s something that you shouldn’t really notice the first time you see it, but maybe on a second or third viewing. Then you’ll say, “Oh, now I get it! I can see that!”