Ask the Filmmakers: What was your 12-year journey bringing “Pleasure. Love” to screen at Sundance?

Pleasure. Love (2015) is an erotically charged, dreamy film about the different forms love can take. The Chinese film explores the gap between how people view and treat love when they are in their twenties versus their forties. The first half of the story details the relationship between Nan Jiang and Yujie Hu, a passion that burns fast and bright. The second half seems to rewind to Hu’s past, emotionally devastating relationship with an older man, who also happens to be named Jiang Nan. Writer-director Yao Huang, who wrote the script over 12 years, wanted to represent a continuous cycle of love stories in which the older lovers pass on their history of joy and love to the younger lovers through time and experience.

ScreenPrism talked Yao Huang, the director of Pleasure. Love, and Victoria Hon, the film’s producer, at the Yarrow Hotel after its official world premiere at the 2016 Sundance Film Festival. 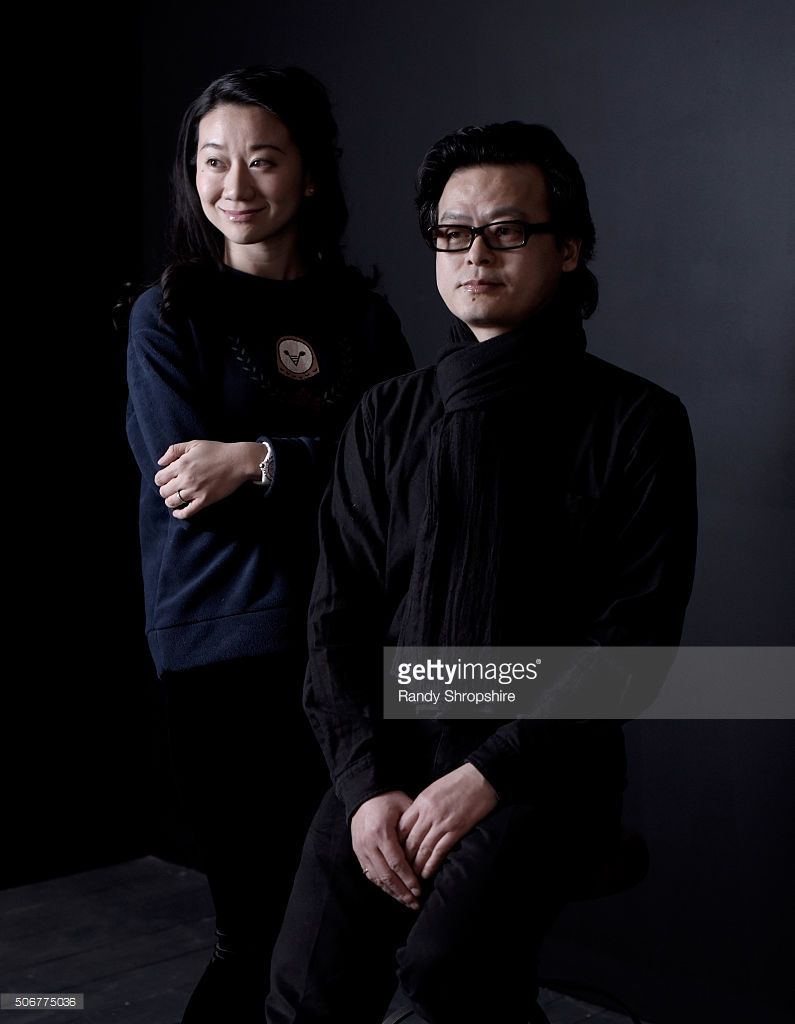 Producer Victoria Hon and director Yao Huang from the film Pleasure. Love. at the WireImage Portrait Studio hosted by Eddie Bauer at Village at The Lift on January 25, 2016 in Park City, Utah.

SP: Interestingly, when I first researched the movie, I found the alternate title, Male Joy, Female Love, rather than Pleasure. Love. Which title did you originally choose for the film?

Victoria Hon: I made the decision to make it called Pleasure. Love.

YH: We changed the name; there was no particular meaning or reasoning, but due to the censorship process, there was recommendation that we change it. The producer, Victoria, made the suggestion.

VH: The previous [title exists because there] is a phrase in Mandarin Chinese that means “sexuality, or sensationally, male and female pleasure together.” It’s a Chinese idiom, it [means] “lust and pleasure [between] man and woman within a relationship.” But when we directly translated to English, it didn’t quite make much sense to western audiences, so we wanted to make a title that is closer in topic to [the film’s theme].

YH: [We wanted to] really, directly, convey the message to the audience. And it worked [once we chose the Pleasure. Love title].

SP: Did the script change from the original vision because of the censorship process?

YH: There were a few changes. For example, ones involving nudity: the number of images were changed. [However, to compare] the original script [to] what was recommended, there weren’t too many changes that I couldn’t accept. The entire process – working with the film commission and censorship – it went back and forth about a year, but they were patient in working with us.

SP: Can you talk about the casting process?

YH: To talk about the casting process is another story in of itself. There were many A-listers who wanted to do the film, and many Hong Kong, Taiwanese and Chinese actors as well. There were some who were a little bit hesitant about the nudity. The two more mature actors that were selected to do the roles (Nan Yu and Xiaodong Gua), they had much gravitas in both China and Europe, and so they were – to share with you the process, the actors were also picking the script. China, just in general, is a very competitive film/media medium market, so the actors have to select the script and then meet with the filmmakers or investors to sign up for the project. But even if they like the project or the script, there’s still a lot of follow up conversation. It’s a long process. Regarding the younger actors who were selected for the film, they’re completely new to the scene. They’re new faces. The actress (Yi Sun), we selected her out of 1,300, and [for the male] actors, it was out of 600. However, I met the younger male actor (Daizhen Ying) about five years ago, and he’s always been on my radar, [ever] since I met him when he was still in college.

VH: He started casting about four years ago, after he had finished the script. It’s a competitive market overall. The actors are very selective overall. It’s very hard for even well-received actors and actresses to get a new director’s project. The script is the crucial factor to get them interested.

SP: Yao, Victoria, how did you two become a team? How did this collaboration happen?

VH: I actually met [Yao] a few years ago. I met him when I first came back to Beijing from Vancouver. In the development period of the script, we originally had half of the story happen in Beijing and half of it in Vancouver, so the director went to Vancouver for location scouting. At that time, I was in Vancouver and I helped with the whole process of location. Yao remembered me, said I left a big impression. When my boss asked him who he felt comfortable working with, he said me. During the shooting process, I wasn’t actually the producer, because I was working on another project, but later, I became producer of the film.

YH: During the middle of the production, there were unfortunate accidents, like disagreements with the previous producer, arguments over editing, and where the film was going to go. I had worked with Victoria before on other partnerships and I felt comfortable working with her. [Happily] the overall production company suggested that Victoria be brought onto the project as well.

ScreenPrism: Did you intentionally film Pleasure. Love so that time seemed ambiguous?

Yao Huang: Regarding the time, space, and look of the film: there was much consideration throughout the film. I did not want to reveal – towards the end only – because I wanted the audience to consider the various scenarios. There were three [distinct times].

Yao: Actually, for this film and any other film, I can’t really copy real life stories, but there were inspirations from personal experiences. When I was writing the first draft, there were some experiences I had with a friend of mine. The relationship felt like a disappointment. I always thought our future would be wonderful, but what I imagined was not what happened. During the draft process, I used that as a backdrop, as a vehicle to express that: what could’ve been. Throughout the process, the script also changed as well, as I matured.

SP: Is that why the younger lovers are so much more jaded than the older lovers?

YH: About the two younger characters: when you first enter society, there’s always this rashness and high sensitivity. I wanted to highlight those characters and compare [them] to the older characters, [who] are more tolerant and understanding because they’ve been through that process of youth. I really want to show that juxtaposition in the film.

SP: The tone of the movie is infused with sadness and resignation. What is your opinion on past loves, first loves, new loves?

YH: The feeling of melancholy is what I want the audience to feel at the end of the movie, just like how you felt after watching the movie — a little sad or melancholy. Regarding the topic of first loves, past loves, new loves, I think it has to do with the different stages of life. The point of view toward the opposite sex is different in terms of sexual desire, and the understanding of love is different in every stage of life. If you want me to compare my current love and my past love in my personal life, I think that of all the women I have ever met, my current love is the most beautiful on the inside, even though she is not the most beautiful on the outside. She has a big heart and is very forgiving. I think I have learned a lot from her, and that is the reason why we have stayed in a relationship for so long. As for my past love, she was beautiful on the outside but not so much on the inside. I really have no idea what my future holds, but I am enjoying my current love. We get along well. As creative people, we indeed need something new and fresh sometimes. I don’t know about others, but for me, experiencing something new and fresh is what inspires me to do well at my work. About the future – I’m afraid to think about these questions sometimes – because as a filmmaker, you draw from personal experiences, and they will inspire, and I don’t know when those experiences are going to occur.

SP: How long have you been with your current wife?

YH: I finished the script in 2004 and then met my current wife.

VH. Actually, the girl that inspired the story is still very close friends with him. She, in recent years, in actually more passionate in communicating with him.

YH: It’s kind of expected that she would have this reaction now because back in that time, I told her: “If you miss me, that’ll be something you’ll lose.” [Laughs] I know every couple say these [kind of] things [when they] breakup, but… She’s a very treasured girl in my life, and [ultimately] she’s changed her mindset and tolerance, which is what I needed.

VH: He’s never talked about these things before. This is the first time I’ve heard this. So you are getting the first scoop.

YH: The entire movie! [Laughs] The more mature lover and younger in the shower scene. The dance hall scene. And the scene – it wasn’t in the script – when the two lovers are frolicking in the grass. And the coffee shop [scene, when the] younger girl is stepping on the body of the elder man – that was not in the script, it was spontaneous. And the ending of the two parts. I guess that is the whole movie!